I didn't have a doubt that Kings fans were going to shatter the world record for crowd noise and I wasn't let down. Not only did we break the record once, we broke it each time we attempted it, finishing at 126.0 dBA. The game itself wasn't that great, so this event made an otherwise forgettable night very memorable. I unfortunately wasn't able to meet as many of you that came for the StR group (995 strong!) as I would have liked, but there will be plenty of future opportunities at other StR nights this season.

This was Sacramento's first real wire-to-wire victory and it was never really close past the first quarter. The Kings didn't even play a perfect game so much as they played a good game and the Nets played a terrible one. Our guards were all spectacular and Marcus Thornton was finally able to catch fire from beyond the arc. This was a good game to build a foundation on, but unfortunately the Kings weren't able to get the next two.

Patrick Patterson's injury against the Pistons gave Luc Mbah a Moute his first real chance to play meaningful minutes, and he made the most of it, giving a good enough impression that he replaced John Salmons in the starting lineup against the Grizzlies. He didn't play as well offensively against the Grizzlies, but I was very impressed with his defensive effort. The Kings even matched him up against Marc Gasol several times and he was the first real guy that bothered the big Spaniard. Defense is why we traded for Mbah a Moute and with the way John Salmons is currently shooting the ball, it's not like we're losing anything on offense either.

Sacramento's SFs not named John Salmons have actually stepped up a bit this week. Travis Outlaw was a big part of that with his big performance against the Grizzlies. Travis had 18 points in just 16.7 second-half minutes. He also snagged 6 boards and an assist. Outlaw is quietly having his best season in years. He's hitting over 45% overall and from three. Right now he's Sacramento's best Small Forward. I said this on Twitter yesterday, but Outlaw is slowly going from one of my least favorite Kings to one of my favorite Kings. He plays hard, and now his shot is falling too. This is what we've been waiting for for three years now. I hope he sees some increased playing time because if it were up to me, he'd be starting.

Thomas has been Sacramento's most consistent player all year. He's the only King to have scored in double-digits in every game. He's also been stepping up his passing game, with an assist-rate of 34.3% in the games leading up to the Memphis game. Thomas isn't without his faults though. At times he tries to do a little bit too much, such as against Memphis when he pulled up for a few threes early in the shot clock that weren't really needed. He also ignored the open man and hot hand (Travis Outlaw) on a few occassions in order to seek out his own shot. But the good has far outweighed the bad for Isaiah this year, and I'm not sure any other King can say that.

N'Diaye got the call to come in and play hard against a loaded Grizzlies front line last night, with injuries to Patterson and Hayes. He came in and did a fine job for someone who has barely seen any playing time. He more than doubled his previous career-high in minutes and rebounds. I don't expect we'll see many more nights this season where Hamady plays this much barring other injuries, but it was nice to see the effort he displayed.

1. Ben McLemore as a Starter

Ben McLemore has been thrust into the spotlight a lot sooner than Coach Malone likely wanted him to be because of Marcus Thornton and the team's struggles. So far, McLemore has not really been that much of an improvement as a starter. This was probably his worst week yet and the first time he actually looked bad. The game against Brooklyn, he was just 1-8, and he was 2-6 in both of the other games. I think he still is getting used to the pace of the game. Right now he's playing just a little too fast for his own good. I think once you see him start to take his time a little bit, his shooting percentages will go up, as will his confidence. I continue to have high hopes for Ben's future.

DeMarcus Cousins has improved a lot of ways this season. I think he's showing more patience offensively around the basket. I think he's giving more effort on defense. His on-court demeanor, particularly with regard to suspect calls and the such, is much better. But there are still stretches where he simply disappears or can't buy a bucket, which kills our offensive possessions. Cousins is our best player, but so far he simply hasn't been a guy that we can count on night in and night out. His averages are impressive, but they tend to be a mix of big highs and low-lows. I'd like to see more consistency, although I'm sure the fact that most of his teammates can't hit a shot right now isn't helping the offensive spacing. Cousins has a great matchup coming this week with the Suns where he can hopefully bounce back and have a couple monster games in a row.

Sacramento continues to get killed on the glass. Every team this week out rebounded the Kings. Cousins is one of the better rebounders in the league, but at other positions the Kings don't really have anyone that's above average for their position.

Marcus Thornton seemed poised to have a great week after coming to life for 24 points against Brooklyn, but he wasn't able to keep the fire smoldering the rest of the week. After going 10-19 from the field against the Nets, he was just 6-19 for 17 points in the other two games. Thornton's struggles have thrown Sacramento's offense out of whack and put more pressure on McLemore as well, which isn't good for anyone. We've seen Thornton be streaky before, but it wasn't too long ago that games like the one against the Nets were more the norm than games like the one against Detroit. Where did that Marcus Thornton go?

I don't really know what I can even add to this that isn't already known. Salmons is not a bad guy. He's shooting abysmally though, and I was glad to see him replaced in the starting lineup by Luc Mbah a Moute. As far as I'm concerned, he should be 3rd in the SF rotation behind both Mbah a Moute and Outlaw. Salmons is one of the few Kings who puts a consistent effort on the defensive end though which is why I'm guessing he continues to be a rotation player. If he continues to get big minutes, I hope his shot starts falling soon.

How is it that we're only 9 games into the season and we've already had four or five games where we've had to question whether the effort is there? Especially for a team as young as the Kings, this isn't acceptable. The effort was much better against the Nets, but the Kings have yet to go more than a game or so before becoming seemingly disinterested in playing hard again.

Is this whole effort conversation insane to anyone else? How is this even an issue?

Honestly… Think about that. The bar literally could not be set lower and we’re STILL having to discuss effort. Ugh

2. No consistency at PF

We all knew we had a gaping hole at Small Forward, but right now the team's PFs, one of our deepest spots on paper, are not providing nearly enough on a night-to-night basis. Jason Thompson replaced Patrick Patterson in the starting lineup on Wednesday but it's not like Thompson has played so much better than Patterson or anything. Patterson's struggles have been a bit mind-boggling, especially his perimeter jumper. He's just 4 for 22 from beyond the arc, just a season removed from hitting 38.6% of his attempts. The Kings have even put him in the corner more, where he specialized last year, and it still hasn't been falling. Carl Landry's injury has hurt us a lot more than I would have expected. Both Thompson and Patterson need to step up their games while he's gone or Sacramento is going to continue to find themselves out of games more often than not.

Thornton may have led the Kings in scoring against Brooklyn, but the Greivy Train (trademark pending) was the real star of the game. Vasquez had a breakout performance, both scoring well and setting up easy shots for his teammates. He had 12 assists to just 2 turnovers, and everything seemed to click. He didn't play nearly as well in the other two games of the week, but I think we got a good glimpse of why the team was happy to get him in a trade. Offensively, he's very talented. He's a much better scorer and shooter than I expected, and is particularly adept with his floater in the lane. It's the other end of the court that's a problem with him, and that is a team-wide issue.

The Sacramento Kings - The healthiest horse in the glue factory

Young Kings Saddened, but Relieved After Team is Forced to Put veteran John Salmons to Sleep by beeradgee88

Demarcus cousins gets his first look at Pierre the Pelican. 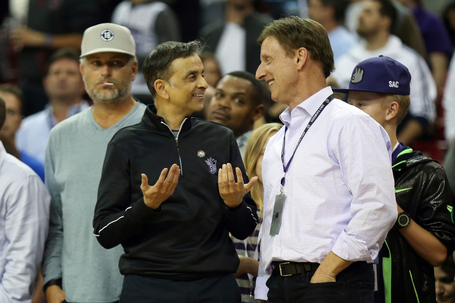 11/19 vs. Phoenix W (The Kings match up very well with the Suns and I hope that we see the team start to get back on the right track before heading out on the road for a bit.)

11/23 @ Los Angeles Clippers L (I don't know why but we tend to compete with the Clippers. However I haven't seen this team excel against anybody yet so I'm not predicting an upset)

Nostradumbass Record for the Year: 3-6