Kings vs. Warriors preview: A tough finish to opening week

Can the Kings defense hold up against a tough test?

Share All sharing options for: Kings vs. Warriors preview: A tough finish to opening week

Isaiah Thomas is still smokin'. He was awesome in the preseason and he's been awesome in two regular season games. This role is working out beautifully, though the Kings did fall behind a bit too much before he came in during the third quarter. Isaiah loves to go against Stephen Curry and shut him down late in the final preseason game between the teams. Once I.T. hits the court, this should be a fun battle.

There's no way that Michael Malone can replace Greivis Vasquez in the starting five with Thomas. Anyone calling for that needs to be put in a locked room with a 120-page list of Keith Smart's starting lineups. Stick with the decision. The Kings are 1-1 against playoff teams from last season with this lineup, and I.T. looks totally comfortable in his role.

MATCHUP OF THE NIGHT

Boogie has two 20-10 games to start the season. Bogut isn't doing anything on offense, focusing instead on anchoring a defense with the potential to be top-10. Each has a very major task on Saturday. The key for Cousins is to continue to work inside despite the presence of Bogut. Here's what the distribution of Boogie's shots has looked like so far this season. 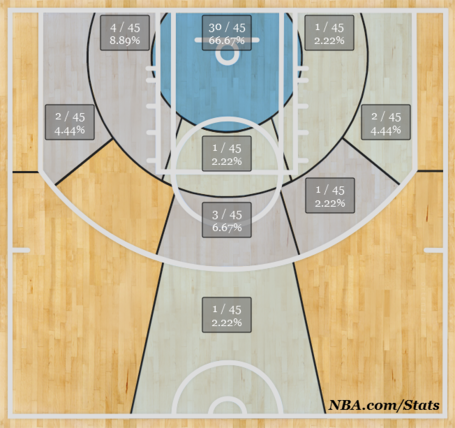 Two-thirds of his shots have been within eight feet of the hoop. Tremendous change. He happens to be shooting 53 percent in that area.

Can our defense thrive?
Or is talent too shallow?
Steph, Klay will test it.