The nuts and bolts of Derrick Williams

Is Derrick Williams a bust? Is he salvageable? What does he offer the Kings?

Share All sharing options for: The nuts and bolts of Derrick Williams

The Sacramento Kings have traded Luc Richard Mbah a Moute for Derrick Williams; it seems like the deal will become official at some point Tuesday, and I'd expect that Williams will be in practice Wednesday and in uniform on Friday. No one knows whether Michael Malone will give him early run or see how he does in practice for a while first. We do know that Malone hasn't exactly been enamored with his current power forward rotation.

But what can we expect Williams to offer? He started 56 games in 2012-13 as Kevin Love struggled with injury, so we have a good base on how he plays statistically. All of the following numbers come solely from those 56 starts in 2012-13.

Williams averaged 17 points per 36 minutes, which is a solid rate. (Jason Thompson is a career 14 points/36 guy. Patrick Patterson is at 13.) Without Love, the Timberwolves didn't have much in the way of offensive firepower last season, save for Ricky Rubio, who is basically a passer only at this point. So Williams had a pretty solid usage rate (24 percent) and used almost all of those possessions to get up shots. He also gets a good bit of the scoring from drawing fouls: he picked up a solid five free throw attempts per 36. (Patterson is 1.4 for his career, J.T. is at 4.)

The big problem with those two-pointers is how many of them came outside the rim area and how many of those clanked. NBA.com/stats won't let me break out his shooting only in starts, but here's what the 2012-13 shot chart looks like. 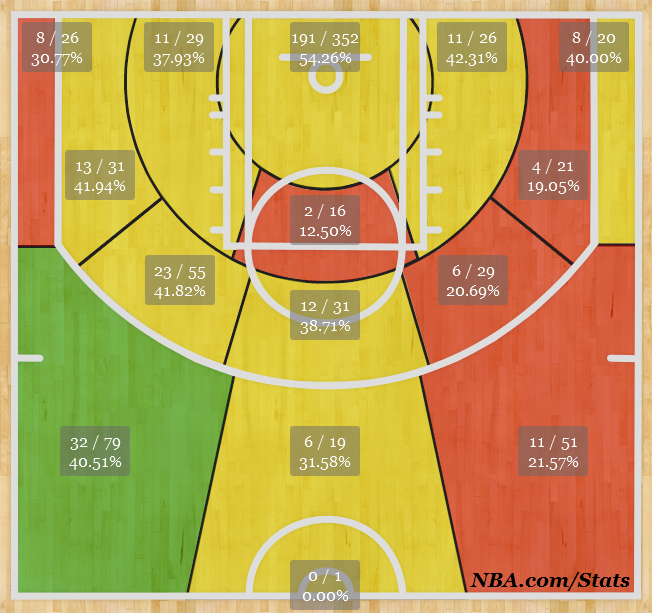 He shot about 35 percent on long two-pointers, which is not good enough when a fifth of your shots are coming from out there. About 45 percent of his shots came in the restricted area, and he did pretty well there. As is the case with our friend DeMarcus Cousins, more close shots at the expense of mid-range twos would be beneficial for his efficiency.

At small forward, he's an excellent rebounder. At power forward, he's a good rebounder. As a starter last season he averaged eight rebounds per 36 minutes, and his full-season (bench and all) defensive rebound rate was a solid 20 percent. Rebounding matters! He's good at it.

His other stats are low

He offered up less than one assist, steal and block per 36 minutes last season, and had just over one turnover per 36. (His turnover rate is really quite low, but not as low as his assist rate.) He's a prototypical forward in that sense: score and rebound and maybe defend.

His defense is a mystery but probably not the good kind

Minnesota had a pretty good defense last season. It was better when Williams was on the bench. Given that Love is a dicey defender, that doesn't sound good. The fact that he'd fallen out of Rick Adelman's consciousness is probably also not a good sign. He's almost certainly not as good a defender as Luc Mbah a Moute. But he's also probably not much worse than Thompson, Patterson or Travis Outlaw on that end. That's not an endorsement.

(I should note that I think Patterson has defended rather well lately. I've been pleasantly surprised.)

I think Williams can be a solid starter in the NBA if he improves his defense and outside shot, and has more discretion with the ball in the mid-range. Williams is really athletic for his size; if he puts in the effort he could better quickly on defense. Let's hope Malone has some strong influence there. As for the shooting, we need you, Chris Jent. We need you bad.

Of course, if Williams doesn't improve on those items, he's going to be a back-up at best, the next Jason Thompson on a team that doesn't really need another Jason Thompson.

Derrick Williams traded to Kings for Luc Richard Mbah a Moute, according to reports