Week One is in the books and while it wasn't as great as it could have been, there's a lot of positives we can take from it.

There was a lot of hype going into Wednesday's home opener and even more pressure on the Kings to deliver and unforgettable experience to the fans who have stuck around these last few years.  As an attendee at the home opener, I have to say that the Kings delivered and then some.  The pre-game festivities had the atmosphere of a playoff or All-Star game.  The team went all out with a new on-court logo, bigger screens, fireworks, the whole ten yards.  It helped that the game itself turned out great and the Kings were able to hold off a late comeback from the Nuggets.  There's one more game I'm looking forward to as much as I was looking forward to this home opener, and that's the first game at the new downtown arena.

So far Michael Malone has proven to be exactly what I wanted in a coach for the Kings.  He's holding his players accountable, sticking with a certain rotation, and giving his players clear and defined roles.

Cousins ended the week on a sour note with a poor effort against the Warriors, but I don't think it overshadowed the work he put in against the Nuggets and Clippers.  In both those games he was a true on-court leader, putting the team on his back at times and producing like a star.  There were times where a little bit of the old DeMarcus came out, but for the most part it was great.  For more on Cousins' growth, News10 had a great interview with him that you should check out here.

Thompson was replaced as the starter in favor of Patterson but there's no doubt that he's been the better player so far.  That's not to say he's been phenomenal or anything; his game against the Nuggets was miserable until he was able to put back the eventual game-winning dunk.  But he was able to bounce back with two good outings against the Clips and Dubs.  If Patterson continues to struggle, perhaps we'll see JT reinstated to the starting lineup.

In terms of pure numbers, this was a rough week for the rookie.  Still, I think he came out of his shell a little bit in Saturday's loss to Golden State.  He was able to make some shots and ended up leading the Kings in scoring with 19 points.  He wasn't exactly efficient on 8-17 shooting, but it was a big step up from his first two games.  Speaking of those games, while he didn't exactly produce, I still liked what I saw from him.  He was putting in effort on both ends, and was always moving on the offensive side.  Right now his outside shot isn't dropping, but I'm not too worried about that.  Good shooters find their rhythm eventually. If you'll remember, Stephen Curry didn't really find his stroke until midway through his rookie year.  I'm not saying McLemore is as good a shooter as Curry (he's not, nobody is) but he's going to take a while for him to get adjusted to life in the NBA.

17,317 showed up to both home games, and there was a sizable contingent in Oakland led by Crown Downtown.  Well done Sacramento.

This decision looks pretty good so far this week, on an admittedly tiny sample size.  Evans is averaging 6.3 points on 25.8% from the field in his first three games in New Orleans.  He'll obviously get better, but $11 million a year comes with much higher expectations.

For all the talk about making the Kings a better defensive team, the offense has been a big issue in the first three games as well.  Isaiah Thomas is the only player that has scored in double digits in all three games, and the Kings as a team are really struggling with shooting the ball.  The 34.5% they shot from the field in Oakland yesterday was the worst percentage of the year so far for any NBA team.  It's not that the Kings aren't moving the ball; players just aren't hitting their open shots.

Putting this in the bad has less to do with Jimmer and more about how badly the Kings screwed up the 2011 draft.  Jimmer has never really had an opportunity on this guard-heavy team, and now it's possible that he'll end up leaving the Kings after three years with Sacramento having nothing to show for using a top 10 pick.  That's not this current management's fault, and it's not Jimmer's fault.  It just sucks.

The Kings put a lot of pressure on Patterson to perform this year with Carl Landry out.  He didn't start for the Kings last year but he was a good contributor off the bench, both inside and out.  So far in three games, he has been outplayed by Jason Thompson and is really struggling with his shot.  He's just 5-20 this past week, and 1-9 from three.  If Patterson isn't hitting his shots, the Kings spacing, particularly for DeMarcus Cousins, is going to suffer.  I have faith that he'll bounce back, based off his career to date.

So far, Vasquez has been the worse of the Kings two main Point Guards.  He was very good in Sacramento's home opener against Denver, but since, he's struggled, especially on the defensive end.  Vasquez has great size but his quickness leaves much to be desired.  Also, for all the talk about his playmaking ability, he has less assists to date than Isaiah Thomas, although to be fair, a lot of Kings are shooting far below their career averages early.  Vasquez is still working himself back into game shape, so hopefully this is just a bump in the road for him.

When Marcus Thornton isn't hitting his shots, he's not giving you much.  He came to life a little bit against the Clippers, but aside from that he's been awful.  He's had streaks like this in the past, but hopefully we'll see some more consistency from him, sooner rather than later.

1. Kings don't put up a fight in Oakland

There's no doubt the Kings were frustrated after a tough loss the night before at home against the Clippers, but that's no excuse for the lack of effort they put in the next night in Oakland.  The Warriors were able to build a double-digit lead early and there was no recovery for Sacramento.  Sacramento needs to get off to better starts going forward.  I love that Michael Malone was so direct about this issue after the game.

There doesn't appear to be an end in sight for Sacramento's woes regarding the Small Forward position.  John Salmons has been off to an awful start for the season, going 5-22 in his first three games.  Traivs Outlaw has been better, but not by much.  Statistically, he had a good game against the Warriors, but most of his points came in garbage time.  Luc Mbah a Moute was supposed to alleviate the pain at this position but he hasn't had the chance to make the rotation yet as the Kings are working him back into game shape.  We need some production at this position, because going small won't work all the time like it did against Denver.

Isaiah was Sacramento's best player this week, instrumental in the sole victory and almost responsible for another one when he went off on the Los Angeles Clippers. He struggled shooting the ball against the Warriors but he was still able to make an impact with his ability to get to the line (his Free Throw rate is at an elite level right now) and his playmaking.  I personally would have kept Isaiah as the starter over Vasquez, but if he continues to produce at this rate off the bench, I'm not going to complain. And oh well... Can't expect every 60th pick to pan out

Luckily Isaiah at #10 was a great pick

"Coach, I feel it! I feel the spirit of Team Defense throughout my whole body!" 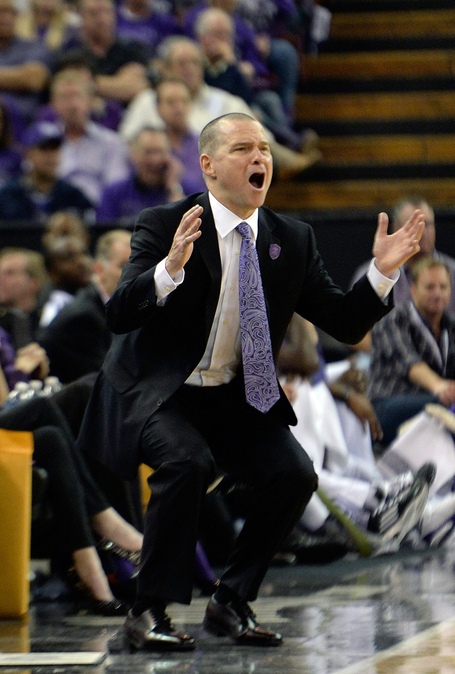 11/5 vs. Atlanta W (The Kings will come into this game well rested and hopefully motivated after a really disappointing effort against Golden State.  I expect them to give their all and take care of the home court)

11/9 vs. Portland W (Portland comes to Sacramento in a rare NBA same team back-to-back, but I think the Kings will manage to win yet again)

Nostradumbass Record for the Year: 3-0