We saw the best and worst games of the season this week, and made perhaps the biggest trade since Peja for Artest. It was a crazy week.

If there's one thing we can say about Pete D'Alessandro so far as a GM, it's that he's not afraid to take chances. He signed Cousins to a big contract extension. He decided not to match Tyreke Evans' contract. He made an offer to Andre Iguodala, and then pulled that offer. He traded future 2nd rounders for Mbah a Moute, then traded him in the first month of the season for Derrick Williams. However, none of those moves were as aggressive as the trade for Rudy Gay. When I heard the trade, my stomach dropped because I felt that there had to be a piece going back to Toronto like Isaiah Thomas. I vastly overrated the market for Gay when the Kings were able to get him for Salmons, Hayes, Patterson and Vasquez. Of those players, only Vasquez was playing better than average, and it served the dual purpose of allowing Isaiah Thomas to become the starting Point Guard. I wrote a couple weeks ago that the Kings needed to upgrade their talent level. Acquiring Gay does that in spades. Warts and all, he's still one of the more talented wings in the NBA. I don't expect Pete is done making moves either.

Isaiah Thomas was having a monster year as a sixth man. Then, after Greivis was traded, the question was whether he would be able to continue his high level of production as a starter. So far the answer seems to be "Yes, and then some". Thomas playing with the starters gives him better weapons to pass to, and it also means that we get into our offense quicker. Isaiah is also a much better first point of defense than Vasquez was, so while the Kings still aren't a great defensive team, they have a better foundation. Now that we are a full quarter of the season in, Isaiah Thomas is still in the top 15 in PER (10th), and Assist Rate (15th). He's also posting career high shooting percentages across the board and getting to the line at a phenomenal rate.

Cousins continues to be a beast around the basket and on the boards. Better than that in my mind though is how willing he's been to pass the ball. Cousins' current assist rate is 19.4%. That's top among Centers and second to Josh McRoberts in Power Forwards. Cousins probably won't make the All-Star team (see team's record) but he's definitely putting up All-Star numbers. He's 6th in the league in PER, just behind Kevin Durant in scoring rate, and 7th in rebounding average. The best part about Cousins to me is that he's still got a lot that he can improve. He needs to be a much better team defender, especially on Pick & Rolls. The Suns scored so many easy baskets this week simply by running Pick & Rolls. He needs to cut his techs (at this rate he'll be suspended before the All-Star break for reaching the tech limit). He needs to stop trying to run point unless there is nobody between him and the basket. The sky is the limit for Cousins, and I have to say that his contract extension (which I was against) is looking better all the time.

The other components of the Gay trade didn't get much hype, but it seems the Kings got two potential roleplayers with a little bit of upside in Acy's case. Gray was phenomenal against the Suns, grabbing boards, scoring around the hoop and setting amazing screens. Acy got the call against the smaller Rockets on Sunday, and he was active on both ends of the court.

I watch this guy play, and I see a fantastic athlete who can do a little bit of everything, and I wonder how Rick Adelman and Minnesota couldn't figure out how to use this guy. Williams is turning into a productive player for the Kings, and I for one would like him to be starting at PF over Jason Thompson. Williams had a career night against the Mavericks, scoring 31 points to go with 5 rebounds and 5 steals, missing just 4 shots the whole night. He wasn't that productive or efficient the rest of the week, but he's still giving us good minutes whenever he's in the game.

Malone doesn't seem to trust any of his backup PG options enough to give them meaningful time, but I think Jimmer Fredette has looked alright in spot minutes as a backup. In fact, I'd give him all the backup minutes as well as any minutes currently slated for Marcus Thornton at SG. I thought the lineup Malone showed off in the Rockets game with Gay as a ballhandling SG and Fredette as off-ball PG was interesting and perhaps a way for Jimmer to get more minutes. He can't be playing any worse than Thornton is now so I say why not give him a chance.

These were Sacramento's two best victories of the season-to-date. The Dallas game was a mixture of both the Mavericks playing awful and the Kings being on top of their game. Both Cousins and Williams scored 30 points, the first time that's happened for Sacramento since Martin and Bibby in 2007. Thomas chipped in 24 of his own with a career-high 12 assists. I thought the win against Houston was even more impressive though. The Kings were able to close out a tough opponent at home, and the outcome of the game wasn't really decided until the 4th quarter. It could have gone either way, but the Kings didn't suffer from too many lapses, responding almost every time Houston made a run of their own. It was a solid win at home against a top-notch opponent.

9. Jason Thompson against the Rockets

I think JT showed a little bit more of his old self than bad self this week, especially against the Rockets. He moved well off the ball, he ran in transition, and he had a couple of sweet blocks. That's the JT we need to see every night.

The defense in this game was atrocious. Nobody on the Kings could stop Goran Dragic or Eric Bledsoe. This game was a winnable one, but the Kings never figured out how to get a stop when they needed one.

Jason Thompson should never be allowed to talk to the officials ever.

I like that Travis has been making his shots this year. I just don't like where he takes them. He's a master of passing up wide open threes to take a contested 18 footer. Just shoot the three.

Ben McLemore shot the ball 25 times this week. He made four of those shots. Marcus Thornton wasn't much better at 6-25. I'm willing to give McLemore more rope because he's a rookie and he's still trying to figure out his spots and learn the NBA game, but Thornton is a veteran. This is a guy just a couple years removed from leading this team in scoring. He was never efficient, but he's never been this awful either. It seems that every time he puts the ball up, it caroms off the rim and it ends up being a wasted possession. Right now this spot is the new gaping hole for Sacramento (now that we have a couple productive wings in Gay/Outlaw).

2. Getting blown out by Utah at home

Easily the worst loss of the season. The team with the worst record in the NBA came into Sacramento and absolutely dominated the Kings in every aspect of the game. The defense in this game was even worse than against Phoenix. Almost every Jazz player with meaningful minutes scored at least 8 points. This was a bad game from everyone involved, including Coach Malone, who played Cousins just 23 minutes including inexplicably leaving him out the entire 2nd quarter when he had just 2 fouls.

If you wanted a reminder that the fight for the Kings isn't done just yet, STOP was kind enough to provide that answer by dropping off 35,000 signatures to put the arena on the June 2014 ballot. Crown Downtown and Region Builders supplied 15,000 petition withdrawal forms of their own. STOP needs 22,000 valid signatures to get the initiative they want. By all accounts, it will be close and we won't know for a month or so.

The Kings traded for Rudy Gay with the hope that in Sacramento, he could return to being the same kind of guy he was in Memphis: a talented scorer that could also contribute in other areas. So far, in the two games that he's been able to play for us, Gay has been phenomenal. I've heard both Jerry Reynolds and James Ham describe him as a "fluid athlete" and I couldn't agree more. Everything he does is just so smooth, especially when he takes the ball to the basket for an underhanded layup. He's big and strong enough to play the 3 or the 4, and we even saw the Kings playing him as a ballhandling 2 at times against the Rockets. There have been some glimpses of bad Rudy to be sure, taking an unnecessary long range bomb or two, but I can't argue with the results so far. I don't expect that he will be as efficient as he has been so far, but I also doubt that he will be shooting anywhere near as bad as he was in Toronto. Playing with an interior presence like Cousins and an attacking guard like Isaiah will open things up for everyone involved.

You guys were off the charts this week following the trade. Here are my favorites. 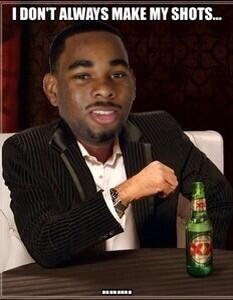 Sorry I'm late (I was at the game)

Just like the images, you guys were some funny S.O.B.s this week.

After the Mavs game:

Salmons, Hayes, PPat, and GV had their best game of the season tonight.

Still time before February to make a deal to get Salmons back!

I'm not convinced Rudy Gay is that good.

But I’m 100% sure he’s better than Vasquez, Salmons, Patterson and Hayes.

So what your saying...

Is we didn’t just trade Salmons, but we kicked him out of the country! Winning!

Yea maybe we can get a 3rd round pick for Thornton

Vasquez continues to slow down our offense.

Also be sure to check out all the fantastic nickname suggestions and photoshops in the nickname thread.

Just a banner week for you guys, multiple great FanPosts.

Kings Clinch Finals Berth With Victory Over Mavericks by beeradgee88

It's Rudy. I'm in Love by Widowwolf LBJ's "Crab dribble" ain't got nothing on Isaiah's "Snake dribble!" 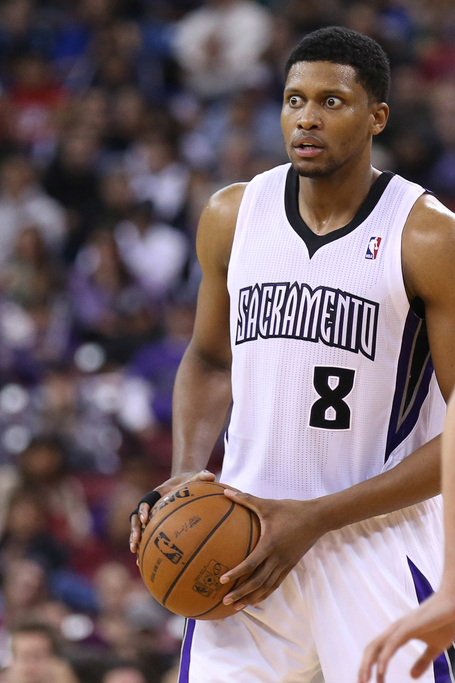 11/17 @ Charlotte W (The Bobcats are surprisingly one of the best defensive teams in the NBA, but they play in the East and I'm not sure they have someone to stop DeMarcus Cousins who has had big games against Jefferson before.)

11/20 @ Miami L (The Kings and Heat have had a couple of exciting games the last couple seasons in Miami, but I can't pick the Kings to beat the defending champs on their home floor)

11/21 @ Orlando W (The Magic's Arron Afflalo is quietly having an All-Star level season, but I feel like the Kings are overall the better team and should be able to pull this win out.)

Nostradumbass Record for the Year: 8-14 This team is super hard to predict.