Sacramento had two close games against two quality opponents but couldn't figure out a way to come out on top in either game.

I'm a fan of this trade, and not just because of Williams' highlight reel game against the Clippers.  I think the Kings gave up a player in Mbah a Moute who doesn't have much value for Sacramento long term for a guy in Williams that could be.  It's a trade that I don't think the last administration would have made, and if it works out, great, we have a solid player for a long time going forward.  If it doesn't, we didn't lose much.  For a team as bad as Sacramento, it's a risk worth taking.

3. Marcus Thornton and Patrick Patterson's breakout games against the Warriors

Boy was it good to see these two get going finally last night.  Thornton got back into the rotation against the Clippers but was a complete non-factor with more fouls (5) than points (4).  He was key in bringing us back into the game against Golden State though with 21 points (and 5 threes) but perhaps most impressively, he played some solid defense on Klay Thompson and Harrison Barnes.  This was the Marcus Thornton I'd like to see more consistently.

P-Patt meanwhile didn't miss at all against the Warriors, going 8-8 from the field for 18 points, including two big threes.  It was so nice seeing those threes fall because it's what we were expecting him to be able to do all season.  I also loved how hard he crashed the glass, and he got them in key moments.  He added 9 boards against the Clippers as well.

I know fans would have liked to see Sacramento take both of these games this week.  I'm right there with you.  But it was still nice to see the Kings hang in there and have a legitimate chance against the two best teams in the Pacific division.  They need to be able to come out like that against every team though, and not just the big names.

The Kings were better on the boards than both their opponents this week.  Derrick Williams really upgraded the rebounding at the SF spot, and Jason Thompson and Patrick Patterson are both rebounding like big men for once.

Ben still has great flashes, but he still looks out of place in the starting lineup.  He gets lost on defense easily, and left Klay Thompson wide open waaaaay too many times.  Offensively he seems to rush his shot, and often doesn't go for the easy attempt.  Ben still needs to slow his game down some, and I still think he'll be a very good player in this league.  But right now he isn't, and I'm not sure it's worth keeping him in the starting lineup much longer if Marcus Thornton can begin to play consistently well again.

A position of strength, at least offensively, for most of this season, the Kings Point Guards fared poorly this week.

Greivis Vasquez is a defensive sieve so great that opposing teams regularly set up plays to clear the lane for whoever Vasquez is guarding.  Combined with the fact that Sacramento has no shotblocker, this leads to a lot of easy layups.  Usually Greivis makes up for it by playing well offensively, but that wasn't the case in these two games either.  He had 7 assists again the Clippers, but shot just 4-12 from the field, and followed that up with a 2-8 performance against the Warriors.

Isaiah Thomas had probably his worst game of the season against the Clippers, scoring just 5 points in 17 minutes, but more importantly only 1 assist to 4 turnovers.  Isaiah's numbers looked much better against the Warriors with 19 points, but I bet if you asked him he'd tell you he played a bad game.  He was just 5-16 from the field and made repeated bad passes for 7 turnovers, 5 of which came in the first half.  His last second drive to the basket was also a poor decision with the paint so crowded and both Cousins and Thornton feeling it.  Instead he got his shot stuffed by Andrew Bogut and Sacramento lost the game.

I feel like Salmons is Malone's veteran crutch, but he's not good enough that he can be trusted night in and night out.  With Mbah a Moute gone, he's now our supposed defensive stopper, and Stephen Curry had no issues getting past him.  He did play well against the Clippers with 14 points, but that's not going to happen every night.  I would much rather play Travis Outlaw at SF than Salmons, especially since Travis has been shooting the ball much better.  He's also got greater length and better rebounding skills.

JT's hands have been absolutely awful lately.  He's missed several easy passes that should have led to point blank baskets but instead were bobbled and turned into turnovers.

The Kings game got delayed almost 20 minutes because the power went out during introductions.  That's not a good look, and just another reason as to why we need a new arena.  It was pretty interesting to watch the first part of the game with no music or other audio feedback, although I did miss Scott Moak's PA voice.

1. The ref that called a Flagrant-2 on DeMarcus for Bogut's flop

I'm just going to let Ziller take it away:

If you call a Flagrant 2 that gets downgraded to a personal foul, you did a bad job of reffing.

I feel like the Kings are one of the most inept teams at both setting and using screens in the NBA.  Especially in these last two games, Sacramento was called for way too many moving screen violations.  Patrick Patterson and Jason Thompson are the biggest culprits, but Sacramento's guards aren't doing them any favors by going before the screen is set.  This shouldn't be as big of a problem as it has been.

The Kings had been taking care of the ball exceedingly well so far this season but had 39 miscues in the last two games.  In games as close as these two, that's enough to change the outcome of both games.  The Kings need to be less sloppy.

Cousins played like a star down the stretch of both of these games and it was great to see.  Against the Clippers, he was Sacramento's primary weapon, and when Los Angeles sent a double team at him, he was quick to pass out of it and find the open man.  Against Golden State he was limited to just 21 minutes because of foul trouble, but still managed to score 24 points on Andrew Bogut, a premiere defender who has shut him down in the past.  He scored two key buckets late in the game as well.  Cousins, along with Isaiah Thomas, has been the only player on the Kings this season that can seemingly be counted on to produce night in and night out.   Eventually, this will start translating to wins.

The real image of the week was anthonysam's caption for last week's caption contest, but this is a good runner-up:

Aww shit… The mystery has been solved!!!

Scirocco did some serious research on D-Will after the trade went down and shared his thoughts with the rest of us.

Just got done watching a ton of Derrick Williams on Synergy (Sorry work, you’ll have to wait for another day)

From what I see, he’s at his best when he’s cutting off the ball around the rim. He’s really athletic and is adept at finishing with either hand. He also shows nice touch off the glass when he’s in motion. He’s also a good offensive rebounder who knows how to finish around the paint. He’s scoring 1.06 PPP on cuts on 54% shooting. That’s handy when you have Demarcus demanding double teams on the block.

His jumper is a mixed bag. I noticed when he’s moving without the ball, he can really shoot when he’s pulling up in rhythm, whether its after a couple of escape dribbles or if he just catches the ball in motion. When he spots up at a standstill is when his mechanics go to hell. Mediocre results but there’s something to work with there.

He’s terrible in isolation. He takes bad shots and lacks the ballhandling creativity to get to the rim consistently. He just lacks perimeter skills. For this reason, I would say he’s definitely a power forward. He just looks lost on the perimeter. But when he’s playing PF (and not posting up or facing his man), he moves without the ball, plays instinctively, and lets his natural ability take over.

Defensively he really lacks a position. He’s got the classic problem of being too slow to guard 3s while being too small to guard 4s. If we try to start him we’re really going to go to hell defensively. SFs are going to blow by him, PFs are going to overpower him, he can get lost in rotations, he doesn’t defend the rim very well because he’s too small and not very long. Honestly, he would have been an interesting fit NEXTto Mbah a Moute, but that’s a moot (Moute?) point.

Offensively, he could be a good fit next to Vasquez and Demarcus because he can just move around against double teams and make plays in space and in motion. Vasquez can find him in pick and rolls, and Demarcus is really starting to show good vision out of the post. It’ll be intriguing to watch a Vasquez/McLemore/Outlaw/Williams/Cousins lineup. Lots of athleticism and off-ball movement around a playmaker and a post-up center.

Things he needs to improve: He needs to become a better spot-up shooter (hopefully this is where Chris Jent comes in) and he needs to improve his defensive awareness. Hopefully we’ll keep his isolation opportunities to a minimum so he doesn’t have to make complicated decisions. I don’t see him as a small forward. The size problems as a PF defensively aren’t really fixable, but he could be at least a good offensive PF. As a SF he’ll likely be a liability on both offense and defense.

Honestly, if you go watch how Patrick Patterson played against the Clippers, I think that’s the best case scenario for Derrick Williams. Cut off the ball when Demarcus is double teamed. Play pick and roll with Vasquez. Crash the offensive glass. Play with energy.

and if that wasn't snarky enough for you guys, here's Andy Sims with his take on the Williams trade:

Summing up: This will probably cost us the title this season.

beeradgee88 has been producing several hits a week.  This week he brought us:

Derrick Williams' Kings debut was all kinds of exciting. 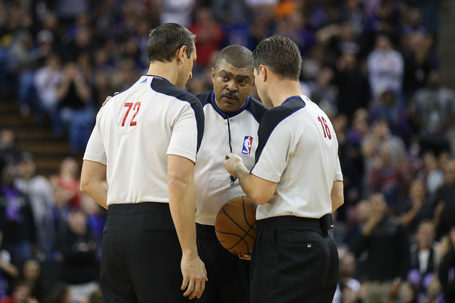 12/3 vs. Oklahoma City L (The Kings have been absolutely shredded by quick, athletic Point Guards this year, and OKC features perhaps the quickest and most athletic one in Russell Westbrook.  Backup Reggie Jackson has been pretty good too.  Not to mention the Thunder have that Kevin Durant guy as well, who I've heard is pretty good at this basketball thing.  I'll be happy if we just stay competitive)

12/6 vs. LA Lakers W (This is the rumored return date for Kobe Bryant.  Let's give him a proper Sactown welcome)

12/7 @ Utah W (This is the only team in the West worse than Sacramento.  The Kings have faced so many tough teams to start this season, they need to beat a team like the Jazz.)

Nostradumbass Record for the Year: 6-9