Isaiah Thomas and the benefits and perils of aggression

I.T. is being incredibly aggressive this season for the Kings. That has pros and cons.

Share All sharing options for: Isaiah Thomas and the benefits and perils of aggression

Isaiah Thomas has been really aggressive this season for the Kings. For the most part, it's worked out beautifully. His per-minute scoring numbers have exploded: he's currently averaging 22 points per 36 minutes, which is wildly high. His free throw rate has exploded as he gets to the rim more frequently: he's now earning one free throw for every two field goal attempts. That boosted free throw rate has bolstered his scoring efficiency, which is currently at a career high level. In addition to that, he's using the threat of his scoring to set up teammates: his assist rate (29.6 percent) and assists per minute (5.9/36) are at career-high levels.

But that aggression isn't on a toggle: it's been 'on' pretty consistently. And sometimes, that costs the Kings. Like in the final play in Sunday's loss to the Warriors. Down two with eight seconds left, no timeouts and the length of the court to go, Isaiah attacked and didn't seem to give much thought to alternate solutions.

Here he is after committing to driving the lane. 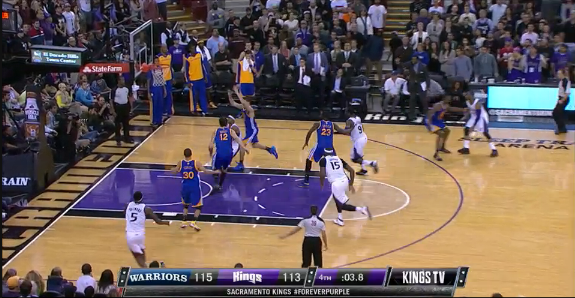 It's a nice thought: attack before the defense is set, get a shot up quickly enough for a potential offensive rebound, beat them with speed when you're the fastest guy on the floor. In execution, the Warriors swallowed it whole and seemed to know exactly what Isaiah would be doing: Andrew Bogut completely abandoned DeMarcus Cousins at the left elbow to get the block, and Stephen Curry came way off of John Salmons, who floated to the left corner.

With the benefit of a bird's eye view and replay, a pass out to Salmons or a stop-and-shovel to Cousins would be better attempts on this play. And Isaiah was 5-15 going into that play -- but he also had 10 FTAs and knew he could blow by Klay Thompson, which he did.

I don't have too much of a problem with the play. You can't turn off the spigot of aggression without losing the good it has created, and on the whole, Isaiah's aggression has been a net positive for the Kings this season.

Now, if we can find a way to let Isaiah (or anyone attainable) consistently guard Curry well ...