The road was not kind to the Kings this week but they did themselves few favors.

We did it. We got Sign Lady into the ESPN Hall of Fame with over 80,000 votes and I couldn't be happier to have Barbara represent this fanbase in Bristol.

This was probably the highlight of the road trip for me. Ben came into his own on this trip, starting in Atlanta. In the final three games this week, he shot a combined 16-22 for 39 points. He also hit 6-9 from downtown. The difference between his makes and misses are easily identifiable. He took his time this week, squared his shoulders to the basket, and didn't rush most of his looks. Hopefully "Flight 16", as he's been dubbed by Jerry, can maintain his good shooting on a more consistent basis going forward.

Gay had one bad game this week against the Bobcats and then followed it up with good offense the rest of the week. It's nice to have another threat that defenses have to key in on, and someone who can shoot from outside or take it to the rack. Rudy's also shown good court vision and has produced some nifty passes, along with a few unsavory turnovers. I can't help but think a lot of his mistakes come from being unfamiliar with his teammates.

I think Acy's going to be a fan favorite. He brings energy on and off the court, making hustle plays that most guys wouldn't do. It's also nice that he can step out and hit a jumper unlike most guys that play the way he does.

JT did a much better job this week of using the touches he did get, scoring a very efficient 35 points on 16-25 shooting. He did a particularly good job of moving off the ball to the rim and was rewarded.

Only one game this week that Isaiah had less than 7 assists, and it was against the Bobcats where the team as a whole shot just 37.5%, and an even worse 31.3% if you don't count Cousins. I heard Sam Amick on the radio this week and he mentioned that while the Kings love Isaiah, they probably will look for an upgrade at the position, either in the draft or trade. I'm just not sure how many attainable upgrades they're really are. Isaiah is pretty good already. My list of Point Guards I'd rather have than him is probably ten names or less. In case you're wondering: Paul, Westbrook, Irving, Wall, Teague, Lillard, Curry, Lawson, Bledsoe, Parker, Holiday and Conley. I guess that's 12. Normally I'd include Rose and Rondo but I'm not sure how either will look like coming back from injury and Deron Williams looks like a shell of his former self. If we're counting the NBA Draft, Marcus Smart (I don't know enough about Exum to make a good assessment) would be the only PGI'd consider as an upgrade, and that probably wouldn't be an immediate upgrade.

We've been here before with the games against Brooklyn and the Warriors, so that's why there's a question mark. The Kings need Thornton to be contributing because the other options aren't great. He was a key factor in the win against the Magic, and not only because of his hot shooting. He's been showing good defensive effort in the minutes he has been getting of late and that's good to see. If Marcus Thornton can become a threat again, that's a big boon to our bench.

1. Travis Outlaw regresses to the mean

Outlaw was doing great for a while there, but lately his shot hasn't been falling nearly as much. After hitting nearly 50% of his shots and 40% of his threes to start the season, he's now dipped back under the 40% mark overall and 32.4% from downtown. It's not just the fact that he's missing shots, it's the type of shots he takes. He has a really bad habit of passing up good shots to take bad ones (especially threes for contested 20 footers). I hope that part of his struggles came from having to play the two-guard spot due to Marcus Thornton's struggles. Hopefully Thornton can retake some of those minutes if he continues to play well.

The Kings don't really have a good option at backup Point Guard. So far, Jimmer Fredette has been getting most of those minutes and it hasn't worked well. Fredette is at his best when he's shooting the ball, and when he plays Point Guard, he tends to pass up a lot of open looks, instead trying to penetrate and find a teammate. While I like the mentality, he needs to be taking those shots because it's what he's good at. There's also the fact that even if he is hitting his shots, he's a liability on the other end of the floor. Rookie Ray McCallum clearly isn't ready for an increased load judging by the spot minutes that we've seen from him so far though, so at least for now, the Kings are a bit stuck.

3. Derrick Williams has a rough week

Williams probably had his worst week as a King this week, not scoring, rebounding or defending very well when he was in the game. He's been more good than bad since coming here though so I'm not super worried. I think he's still adjusting to his bench role after playing so well as a starter for us.

The Kings might as well be the Autobahn for how easily opponents have been getting into the lane and scoring baskets. Whenever the Kings do attempt to pack the paint, they do so at the expense of giving up open threes. It's one thing to help off of a big man who is on the perimeter, it's a whole other to leave a 50+% three point shooter like Kyle Korver open so many times. Just take a look at these pictures compiled by our own lottefits:

That's at least six wide open three point attempts for Korver. That's unacceptable. The team also has a really bad habit of leaving the guy with the ball, which cost them big time against the Heat. There was one particularly egregious possession where Ray Allen had the ball and made a beeline down the lane towards the basket. The Kings defense parted, opening the lane and giving Allen an easy dunk. I thought Malone's head was going to explode.

The defense did tighten up a bit in the final road game against the Magic, and it's not a coincidence that that was the sole victory.

It's one thing when random fans start asking about rumors from random websites, but it's a whole other when legitimate websites pick it up and run with it and fan the flames of a nonexistant fire.

Perhaps the best thing about this season so far has been DeMarcus Cousins' improvement. While Cousins still can improve, especially on the defensive end of things, his improvement on offense has been dramatic. He's now shooting almost exactly 50% from the field (he's one made field goal off), getting to the line more than ever, grabbing more boards, and passing at a Chris Webber-like rate. That's not an exaggeration; C-Webb's career assist rate was 20.2% and Cousins is at 21% (stat calculated before game against the Magic) for this season. I don't believe Cousins is going to make the All-Star game this season but he's playing at that level. In fact, the only two players in NBA history (there are other guys on that list from this season who will almost assuredly be All-Stars) that have had a PER as high as DeMarcus Cousins and not make the All-Star game were Kareem Abdul-Jabbar in 1978 (he missed the first 20 games due to a broken hand) and Shaquille O'Neal in 1999 (No All-Star game that year due to lockout). Cousins is currently 4th overall in the league in PER behind LeBron, Durant and Chris Paul. This is where I get to remind everyone that Cousins is just 23 and has his best years still ahead of him. Keep up the good work, big fella.

Nothing much to say about the game...

In regards to our defense being slightly better than last year:

Your diarrhea isn’t quite as watery as it has been.

Ben McLemore needs to be in the dunk contest. Look at this elevation.

My shooting percentage is how high??? 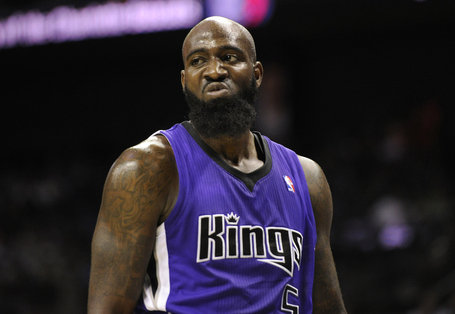 12/23 vs. New Orleans W (New Orleans is a good team, but I'm hoping for high energy from a good crowd and the team being rejuvenated after a long road trip)

Nostradumbass Record for the Year: 11-15