The Pelicans visit Sacramento on Monday before the Kings take a few days off for Christmas.

Share All sharing options for: Kings vs. Pelicans preview: Welcome back, Tyreke Evans!

Someday soon, the Kings will be playing on Christmas. Until then, they play on the Monday before Christmas and the Friday after Christmas, giving the team's bloggers so time off to relax and contemplate picking up a second sport, like international cricket.

Welcome back, Tyreke Evans! Tonight is officially StR Night II, though we haven't done much in the way of promotion. We're checking into the perk for ticket-buyers; stay tuned. If we reached the appropriate level, it'll be handled outside of today regardless.

MATCHUP OF THE GAME

Tyreke Evans vs. everybody

For what it's worth, Tyreke is being a total class act about everything. Really, he always was. But he's also a guy with pride, and a very good basketball player. I have a feeling he wants to show the new Kings management what they're missing, and Lord know the Sacramento defense has trouble stopping anyone.

Tyreke's putting up some decent numbers, though he's shooting just 40 percent from the floor and, uh, 8 percent from beyond the arc on very few threes. Per 36 minutes, he's averaging 17.4 points, 6.9 rebounds and 5.5 assists. If he can get efficient again, this is what, I think, New Orleans envisioned: a do-it-all reserve who prevents drop-off when Jrue Holiday or Eric Gordon sit. If he goes up against Ben McLemore, Marcus Thornton or Jimmer Fredette, it might be trouble.

1. New Orleans has the No. 7 offense in the NBA. But that's bolstered by a very low turnover rate and a very high offensive rebound percentage. They are No. 20 in shooting efficiency. That's where the Kings struggle most. So if the Kings can keep them shooting at an inefficient level, they may be able to restrict the o-boards and force some turnovers. We'll see!

2. Ryan Anderson is taking almost eight three-pointers per game and shooting 43 percent on them. The Kings have loads of trouble with stretch bigs. This is going to be a problem.

3. Jason Smith is questionable, so we might see Anthony Davis at center to battle DeMarcus Cousins. That would be quite fun indeed!

Welcome back, Tyreke!
Good to see you in Sactown.
Now: easy on Ben!

Is there a way I can just pick Ryan Anderson?

Everything you need to know about the post game photo opp for those of you who purchased your tix through the Sactown Royalty Night link: 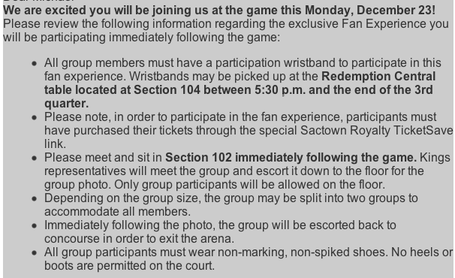