There was an exciting win this week, but the Kings are still suffering from the same ailments.

This was a remarkably fun game. The Sleep Train sold out, the crowd was rocking, and the Kings took the defending champs to extra time before holding on for the win. This was the kind of game that is going to encourage people to come to more games in the future.

I really like Quincy Acy. He's a hard-nosed hustle guy who can give you a little bit of everything. He defends, he rebounds, he dunks, he sets good screens and he can even step out and hit a jumper. Even if Gay ends up not being a part of the Kings future, Acy was a good pickup and he's still young and developing.

I honestly don't know how someone can watch Isaiah Thomas play and not be impressed. Thomas has come into his own this season and is posting career-highs across the board. His PER of 22.7 is in the top-20 of the league, and his assist rate of 33.8% is in the Top-10. The only players listed at 6'0 or shorter who have had a higher PER are Chris Paul, Allen Iverson, Terrell Brandon and Mark Price. That's heady company.

Jimmer has been doing a good job of finding the open man when he gets on the court and in particular has seemed to develop good chemistry with Acy. However, he still is passing up shots to do so. I applaud the effort though. Personally, I'd like the Kings to acquire a true backup PG so that Jimmer can get a real look at SG, where I think he'd be good in stretches, or at least more consistent than Marcus Thornton.

This isn't necessarily a bad thing, it just means that we're going to see a lot of bad and inconsistent play from the rookie this year. The experience he's getting is valuable for the long term, but in the short term, it's not going to be pretty. His defensive effort is great, but his rotations are terrible and that comes from inexperience. He has a lot to work on (shot consistency, ball handling/control, defense) and he seems like the type of guy that will work on it. I really do like the glimpses I see from him.

D-Thrill hasn't got nearly as many minutes since the Gay trade, and when he does play with the starters he's often the 4th or 5th option. I don't mind him as a bench player in the long term, but I'd like to see him used as more of a go-to guy for our bench unit because that's the mentality he seems to thrive with.

It tightened up for one game against the Heat, but the performances against the Spurs and Pelicans were abysmal. Sacramento's lack of a rim protector is killing them on this end. I expect this weakness to be addressed either via trade or the draft. The Kings are currently 29th in shot blocking, and I'm not sure how they're not 30th.

So far, I've been a fan of the Rudy Gay trade. For the most part, Gay's added another offensive threat for us, and he's not awful on defense (lazy yes, but not awful when he puts his mind to it). But some of his turnovers have been dreadful, especially the ones that come when he's handling the ball. I think it's partly because he's so tall and dribbles high that opponents can swipe the ball easily.

Last week we celebrated yet again at what we had hoped was the return of Marcus Thornton, but this week he returned to his dreadful shooting and awful defense. When he's not scoring, he's not giving you much of anything else.

I'm honestly not super sure why Jason Thompson is still starting. He has been trying to do less on offense, which has resulted in his efficiency going up, and that's good. But defensively he's been a disaster and he's turning the ball over at a career rate. His PER of 10.5 is a career-low (previous low of 13.6) and he's just not providing much that he couldn't bring off the bench. I'd much rather have Acy or Williams start at PF in his place (Acy would be my first preference because of the better rebounding and defense he'd provide, while Williams can focus on being a bench scorer).

Almost 40% of his shots coming from mid-range and as we know, most of those are about a foot or so in from the three point line, the worst shot in basketball. 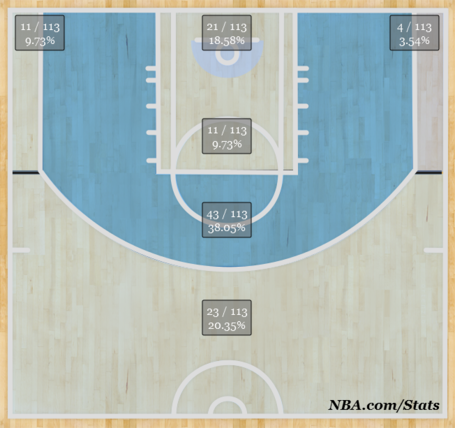 Cousins continues to play at an increasingly high level and that consistency is the best part. The word "dominant" was used a lot in Cousins first three years, but it's only really been true this year. Few teams have been able to stop him, and those that have mainly did so in the early part of the season. After the Heat game, LeBron said he thought Cousins was an All-Star and I agree. It just might not be until next year, when Sacramento hopefully starts to see some more wins.

First a serious note from section214

Did anyone really think that the Maloof stink would be off this team so soon?

I mean, I’m disappointed that this team is playing at its current level, but the club really isn’t all that far away from the (admitedly) low expectations that I had at the beginning of the season. The team has the 5th worst record in the league, and the 7th worse +/-. I would have figured them for about the 8th-9th worst team in the league this year, and with the roster turnover I can understand at least some of the offensive and defensive breakdowns.

This team is miles and miles and miles from being a competitive product. Fortunately (and very differently from the past several years), ownership and management is not satisfied with that.

This is going to take time. And while that does not mean that people have to be patient, the simple and irrefutible fact of the matter is that the shit sandwich of a team that Ranadivé purchased is going to have to be renovated over time.

Make no mistake – I’m not thrilled with the level of play right now. But I can’t fairly direct my angst towards ownership, management or the coaching staff, as they are still dealing out of an empty wagon. This thing is going to take some time.

and now some humor:

For some reason now, whenever I hear groin "pull" I think "Dennis Schröder" 12/31 @ Houston L (I think Houston wants revenge for our beatdown of them a short while ago.)

1/2 vs. Philadelphia W (The Sixers probably will play surprisingly well but I think they have no answer for Cousins)

1/4 vs. Charlotte W (Kings need to take care of business at home against a mediocre team for once)

Nostradumbass Record for the Year: 12-17