This week, this series couldn't be more aptly named.

1. Competing against the Thunder

This was an exciting game, and one that the Kings could have won. No DeMarcus Cousins and the Kings gave the Thunder everything they had. The Thunder eventually showed they were the better team, and then Isaiah Thomas happened. Thomas scored 21 points in the 4th quarter, and even had a chance to send the game into overtime. He got a good look, but it was just short. I wasn't expecting this result, and I'm glad the Kings were able to take it to the wire.

B-Mac looked much better this week. The Kings have moved him over to the Point Guard position on defense to stop penetration and while he's still showing a lot of inexperience, I like him getting that experience. It will only help him in the long run, where he has the potential to be a phenomenal defender thanks to his length and athleticism. McLemore also looked much better shooting the ball, and hit a huge three to send the Kings-Jazz game into overtime. Areas for Ben to work on include dribbling, shooting around the rim, and just being a little more patient with his shot selection. Still, I'm loving what I'm seeing from the rook so far and think he's going to be a stud.

This is the Cousins we want to carry our franchise. He's just unstoppable down low and powers his way to the basket with ease. Sure, it helps that the Jazz didn't have much big man depth but he still took advantage by going inside rather than settling for jumpers.

Thompson has looked much better this week, especially offensively where he's looked less like rookie JT and more like last year JT. I still would rather see him come off the bench since he's a better post presence than Patterson, but so far Patterson hasn't been able to hit shots at a consistent rate yet.

I'm loving the energy Derrick Williams brings as well as his ability to rebound at the three. So far, he hasn't shown an ability to knock down an outside shot consistently, but he's been able to get to the line and to the basket. He's also been able to stay in front of opposing wings which is rather pleasantly surprising. He had to face Kevin Durant this week and I think he did a pretty good job staying in front and contesting his shots. I don't think Williams is a long term starter at SF, but off the bench or as a PF I think he can have a role in this league for a long time.

Hayes comes in and is a professional every time he walks in the court. He's also pretty good around the basket when he gets the ball. My one criticism is that opposing bigs find it easy to grab offensive rebounds over him or lob it over him, but that's not his fault, just a practical fact because of his size.

We got good Cousins and bad Cousins this week. Cousins was terrible against the Lakers. Offensively he looked slow and he forced way too much. Perhaps it was his ankle flaring up, but he just looked a step slow. The worst part was his defense, where the Lakers repeatedly took advantage of him overhelping on Pick & Rolls. This allowed Robert Sacre (ROBERT FREAKING SACRE) to score 11 points on 5-7 shooting in 16 minutes. That's unacceptable.

I'm not sure why Travis Outlaw has seen his playing time disappear. Outlaw had been having his best season to date, and all of a sudden, he started racking up the DNP-CDs again. Considering that the bench has been in serious need of a scoring punch besides from just Isaiah, I'd like to see Outlaw get more minutes, especially over John Salmons.

Thornton may as well be nicknamed "No Buckets" this season. He has played 13 games and only two of those were above average or even average. Thornton's shooting just 38% from the field and less than 30% from three. He's missing wide open shots, and there doesn't seem to be an end to his struggles. He has been playing better defense lately, but even at his best, he's not a good defender. Thornton's strength is his offense, and without that, he might as well not be playing.

Since trading Mbah a Moute, the Kings have seemed to go to John Salmons as the "defensive stopper". It hasn't exactly worked out. Younger players have blown by Salmons regularly, and it's costing more productive players like Derrick Williams and Travis Outlaw minutes. Salmons is a crutch that doesn't help us walk.

Greivis' defense has gotten so bad that the Kings have tasked Ben McLemore with guarding opposing Point Guards so as to prevent penetration. It's a good lesson for Ben, but bad for the team that Vasquez can't guard his man. The thing is, I'm still not sure I'd bench Vasquez because then our bench would have no scorers instead of just one. Vasquez's strength is his passing, and putting him on the bench would weaken even that since he'd be passing to guys like Salmons and Thornton.

Sacramento seems to do an inordinately bad job of defending the three. Sacramento's three point defense is 28th in the league, as they're allowing teams to shoot 39.0% (This stat does not take into account the Utah game, where the Jazz shot 42.1%). Most of these threes seem to be wide open as the Kings rotate poorly. The Lakers especially made Sacramento pay for their mistakes.

I don't really have much else to say that I didn't already say in my recap. This quarter was just stupid, and I haven't left a game this angry since the blowout where Denver scored 90+ points in the paint.

This has been perhaps the most puzzling happening this year. Patterson was an excellent shooter last year, and is at nearly 50% from the field for his career. This year he's at barely over 40% from the field, and just under 25% from downtown. If Patterson can get out of his funk and hit his outside shot, Sacramento's offense will see a big boon. But if his struggles continue, the Kings won't be able to count on consistent production from a big man aside from Cousins.

3. The lineup from Hell

This lineup should absolutely never be in the game: Thomas-Thornton-Salmons-Patterson-Hayes. Thomas is the only true threat in the lineup. Thomas, Thornton and Salmons all tend to take a lot of time before taking shots, resulting in less ball movement. Patrick Patterson is in a big shooting funk. Hayes is too small to prevent offensive rebounds. There's no post threat. This is not a lineup that works.

Isaiah is not without his faults, much like most players. But Isaiah's pros have far outweighed the negatives so far in his career. He's an exceedingly talented scorer, and efficient as well. He's able to make plays for others through his aggressiveness, and he also manages to be a pest on the defensive end. You can't ask for more from someone that was taken last in his draft. This week we saw Thomas outscore the Oklahoma City by himself in the 4th quarter 21 to 19. He also kept Sacramento in the game against the Jazz. Thomas is leading the NBA in bench scoring, 4th quarter scoring and moxie (true story).

Couple good ones this week.  First, we found out who Marcus Thornton looks like:

A couple of phenomenal ones this one. First we have a response to someone calling Barbara (aka Sign Lady) the Michael Jordan of fans.

Michael Jordan: The Barbara Rust of the NBA.

The team I want to root for by CrossCausewayCaustic

Isaiah's 21 point 4th quarter against the Thunder was spectacular

Ref 1: "Ok, we have an ultimatum to eject Cousins. He is overdue this season."

Ref 2: "I got this. Guaranteed he'll post up next play. It's all the Kings got. I'll tell Bogut to sell it."

Ref 3: "What about instant replay? They'll catch us for sure!"

Ref 2: "Maybe we can kill the power again? No instant replay?"

"We are calling a flagrant 2 on number 15 for the power outage." 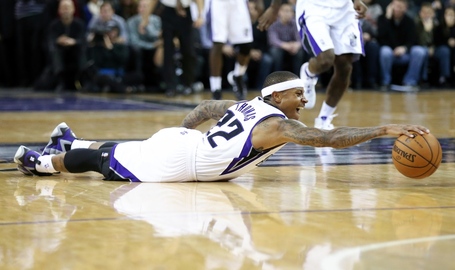 12/9 vs. Dallas L (Monta Ellis surprisingly looks really good when he doesn't have to be the #1 guy. He's having a career year, and the Kings will be hard pressed to stop both him and Nowitzki)

12/11 vs. Utah W (Utah simply isn't that good, and the Kings should be able to take advantage at home.)

12/13 @ Phoenix W (The Kings have beaten the Suns twice already, although both of those came with Eric Bledsoe out. I still think Cousins is a bigger matchup problem for Phoenix than Bledsoe is for Sacramento so the Kings should hopefully take this one as well)

12/15 vs. Houston L (The Rockets match up very well with the Kings. Howard is better than Cousins, Harden is better than anyone on Sacramento, and the supporting cast is deep.)

Nostradumbass Record for the Year: 8-10