"Sorry Kings fans. You guys are really fantastic and all, but the bottom line is the money to be made," they say.

It seems as if it is a forgone conclusion that there would easily be more money made by an NBA team in Seattle than a team in lowly Sacramento.

Well, prepare to have your mind blown.

And no, this is not an April Fools joke.

Each year since 2002 (at least that is the earliest year I could find still available on the internet) Forbes Magazine has published a ranking of NBA team valuations based on things like total revenue, operating income and debt/income ratios.

Dampania originally made us aware of this historical data so I decided to try to make the discovery of trends a little clearer by creating a spreadsheet to see what was going on over the years.

The non-intuitive results may surprise you.

In the below spreadsheet do you notice any trends as to who was worth more and made more money? ;) And remember, this is Forbes data, not mine or any other Kings fan's data. 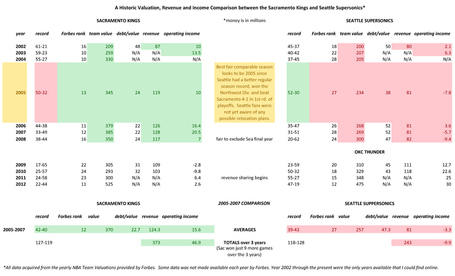 From the data, it looks like the Kings beat the Sonics in every financial category each year. This was with the Sonics playing in Key Arena which the Seattle fans and city leaders argued was still a perfectly useable arena at that time which had been recently enough renovated so the NBA should not have been requiring them to replace it. According to Forbes, the Sonics ranked near the very bottom in team value as well.

The data seems to speak for itself, but to try to be completely fair, perhaps we should look more narrowly at a season which by all rights should favor Seattle.

In the 2005 season, Seattle had a better regular season record, won the Northwest Division and beat Sacramento 4-1 in the first round of the playoffs. Seattle fans also were not yet aware of any possible relocation plans at that time so there would have been no "backlash" toward the team because of that.

Admittedly I am somewhat bound by the fact that I only have data for certain years, but if you take the averages and totals for, say, the 2005-2007 seasons for which there is full data (2008 should not be included as the data is probably skewed due to the Sonics announced move) in which the Kings won just 9 more games than the Sonics in 3 years, there is a $130M total difference in revenue in favor of the Kings, and a $56.8M difference in operating income favoring the Kings over the period.

I assure you, David Stern and the other NBA owners are NOT.

Remember, it was just a year ago on Feb 27, 2012 when David Stern affirmed to us, "The owners, from the board itself, to the relocation committee, to other committees have in effect authorized me to be as supportive as we can possibly be in this process so that we could cement the future of the NBA in Sacramento." via CSN

You may also remember that Stern once called Sacramento a "model franchise" and a "spectacular success story" over the years. Thoughts like that don't just disappear.

And when the stars align to bring together a fantastic new Kings ownership group, a beautiful new arena and a fully willing city in partnership with the NBA in the home that creates model franchises and higher NBA revenues than a competition city, the Sacramento Kings REMAINING in Sacramento now becomes what should be a foregone conclusion.

After all, the bottom line is the money to be made, right? ;-)

Disclosure: I am a Sacramento Kings fan foremost so if this seems slanted to you, it probably and unapologetically is so.

Dave Lack was the longtime webmaster of the Bleacher Mob and Kingsfanclub websites way back when before real life became too hectic.