Vivek Ranadivé is taking over a downtrodden NBA Franchise that needs a lot of fixing up and this summer will be crucial in laying a foundation for the future. The second among his priorities should be hiring a new Head Coach.

Yesterday we took at look at what should be the top priority for the new ownership group this offseason: overhauling the front office.

One step lower on the rung is making a decision regarding the Coaching Staff. Sacramento's Head Coaching job has been almost like a long drawn-out game of musical chairs since Rick Adelman left. In the last seven seasons the Kings have had five head coaches (Eric Musselman, Reggie Theus, Kenny Natt, Paul Westphal, and Keith Smart). Only Theus achieved some semblance of success in the 2007-08 season that saw the Kings win 38 games, but that was with a roster that featured a budding star in Kevin Martin, Ron Artest in his prime, and an aging but still good Brad Miller.

In 2011, the Kings brought Keith Smart on board as an assistant to Paul Westphal. At the time it felt as if this decision put Westphal on the hot seat because Smart had shown some promise as Head Coach of the Warriors during the 2010-11 season. As it turns out, Westphal did end up getting fired after a 2-5 start and a public dust-up with DeMarcus Cousins. Smart took over in the midst of a lockout shortened season and despite having not much preparation or practice time, he did well enough to earn a chance as the Head Coach for a full, regular season. He seemed to develop a bond with his players, particularly DeMarcus Cousins. He recognized the potential of Isaiah Thomas and took a chance on him as the starting PG. 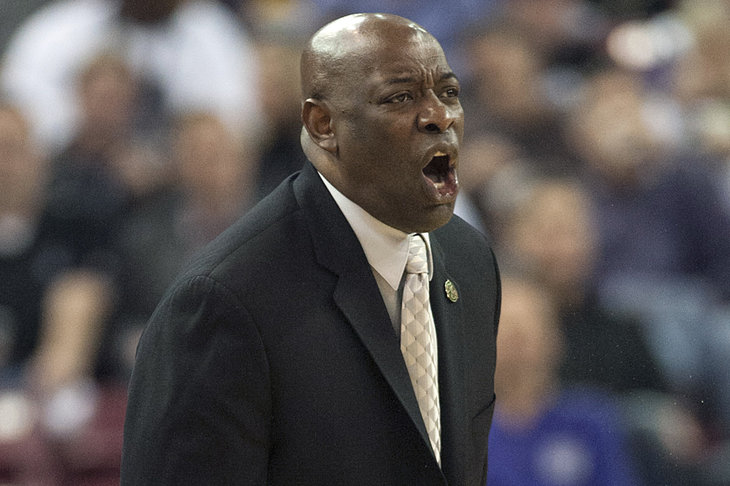 Last season we got to see what Keith Smart could do given a full season to prepare and a seemingly better roster. The Kings added veteran Aaron Brooks to the backcourt as well as intriguing young forward prospects James Johnson and Thomas Robinson. Smart spent the offseason developing a new offense and building team camaraderie. Nobody was expecting the team to make the playoffs, but there was some hope that the team would finally be able to make a significant leap.

They didn't, unless you count a winning percentage increase from .333 to .341 as significant.

Smart's new offense crashed and burned almost immediately as he a) wasn't able to get his players to buy into it and b) it wasn't suited for the roster he had in the first place.

The chemistry Smart had developed with DeMarcus Cousins, which was one of the biggest points in the decision to bring him back as Head Coach, disappeared almost as quickly. I don't blame Smart for this however. DeMarcus Cousins would be a handful for any coach in the league and I think Smart handled that situation as best he could. More surprising however was the fact that by the end of the season, he had seemingly lost the respect of many of his other players, as we heard frustration expressed from guys like Isaiah Thomas, Tyreke Evans and Jason Thompson.

The main source of everyone's frustration, from players to fans, were the rotations. Smart justified his rotations by saying that the Kings didn't have All-Stars that should be guaranteed playing time, and that he expected everyone on the bench to be ready when their number was called. But it's really hard for a player and team to grow together when things change constantly game to game and week to week. There was a significant stretch of games where Aaron Brooks took over the starting spot from Isaiah Thomas and Thomas even got a few DNP-CDs during this stretch. This decision was made all the more laughable when Brooks was later released by the Kings in March. Jimmer Fredette improved noticeably from his rookie year, yet he saw fewer minutes in more games. There was also little sense in how the players on the court paired with each other, as we saw nonsensical lineups that featured no outside shooters, or four guards, or Travis Outlaw.

No Kings player averaged more than 31 minutes a game and only three averaged more than 27.9. Every single other NBA team featured at least one player (most of the time two or more) that averaged more minutes per game than Sacramento's top player (Tyreke Evans). For significant periods of time, the Kings did not put their best players on the floor and that is solely on Smart and that adds up over time.

I like Keith Smart as a person and appreciate the fact that he tried to do the best with what he had. But just like with the ownership and front office, it's time for a fresh start. Smart is still under contract for next season thanks to a ridiculously early extension by the Maloofs, but that shouldn't stop the new ownership group from installing their own Coach. The only way I could see justifying Smart's return is if there is a true belief that he IS the coach we've been looking for. Unfortunately for Smart, the evidence suggests otherwise.

There are also plenty of choices out there for the new Ownership Group to sift through. I'll separate some of my favorites/notables into three categories. I am not listing them by any order of preference and am also not listing all the possible coaches out there.