ESPN's Marc Stein is reporting that Chris Wallace is the early favorite to become the first new GM of the Sacramento Kings in nearly 20 years.

Yesterday, Vivek Ranadivé quickly moved to lock in Mike Malone as Sacramento's next Head Coach, an unconventional move considering the team has yet to hire a new GM to replace Geoff Petrie. Petrie's contract is up at the end of June and it's been reported by several people that he has been informed he will not be with the team this next season.

Sacramento has interviewed two candidates for the General Manager spot: Travis Schlenk and Chris Wallace. According to ESPN's Marc Stein, Wallace has taken the early lead.

According to the report, Wallace has received the stamp of approval from Warriors consultant and former Memphis GM Jerry West, who has been counseling Ranadivé the past couple weeks.

Wallace has seen his role mitigated this past year with the additions of Jason Levien and John Hollinger, but he deserves the bulk of the credit for reshaping Memphis' roster from one of the worst to one of the best in the league.

It's unclear who else the Kings are set to interview for their GM position. San Antonio's R.C. Buford was among the candidates reported earlier this week, but he quickly came out to announce that he was not going to leave San Antonio. Ailene Voisin reports that there is some interest in former Pacers GM Larry Bird, among others.

The NBA Draft is coming up quickly and I don't foresee the search for a new GM dragging on too much longer. Vivek Ranadivé is expected to officially take control over the team at 5 p.m. today when escrow closes. The hiring of Mike Malone will be officially announced after that.

Marc added an addendum to his report via Twitter:

From TZ: A simple chart showing the fates of the Grizzlies and Kings since 2007-08, when Wallace took over Memphis. 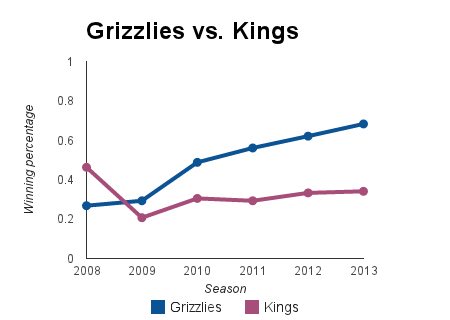