A graphic look at the Kings' offense by who was shooting and who was scoring.

Share All sharing options for: The efficient Kings and the Kings shooting the ball are not always the same

Talking so much about DeMarcus Cousins's efficiency (or lack thereof) lately has me thinking about the Kings' offense as a whole. While Cousins is not particularly efficient, he takes a huge chunk of shots. Is that smart? Do other Kings stand a better chance of turning shots into points?

Let's find out. Usage is the percentage of the team's possessions a player uses while on the court. The higher the rate, the more possessions used. True Shooting percentage is a shooting metric that accounts for the added value of three-pointers and incorporates free throws. Here's the 2012-13 season, taking out a few guys who played few minutes. 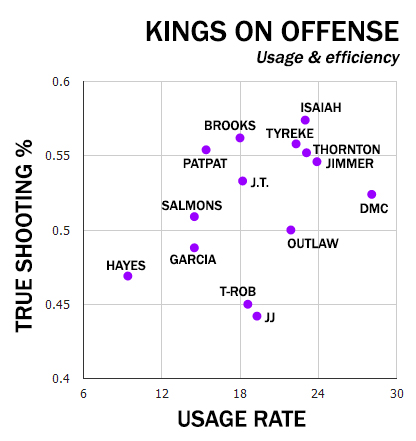 Cousins indeed far outstripped his teammates in shot frequency. And he was not among the most efficient Kings. And those less efficient than him largely fell out of the rotation or were traded. But the other options weren't huge beacons of efficiency, either. (Particularly notable to me is that Jason Thompson isn't much more efficient than Cousins despite a much, much lower usage rate.)

Remember, this offense finished No. 12 in the NBA. Without a single player you could call high-efficiency. More or less, the entire rotation with the exceptions of Cousins, John Salmons and James Johnson (who ended up 10th in minutes played despite being an early-season starter) was right around league-average efficiency. Some (like JT) were lower than average, some (Isaiah Thomas) were higher. But it's a pretty tight grouping for most of the players.

Of course, Aaron Brooks and Tyreke Evans (No. 2 and 3 in efficiency) are gone, replacing by a low-efficiency scorer (Greivis Vasquez) and a rookie (Ben McLemore). Those two guys are likely to play major minutes. That's going to affect the offense a great deal. The hope is that Vasquez's playmaking will boost the efficiency of the other players, especially Cousins, and that McLemore will become the type of scorer who can open up the floor and eventually be high-efficiency.

In the meantime, it look like Cousins will take a huge chunk of the shots, and the Kings will rely on Isaiah, Marcus Thornton and Patrick Patterson to be efficient. I hesitate to mention Jimmer Fredette if only because we have no idea what role he'll fill, if any.

• What cap space and exceptions do teams have left?