The Kings enjoyed their first undefeated week in a while, and are now 7-8 since trading for Rudy Gay.

The win against the Blazers was really nice, but I was more interested to see how the Kings would do against the Magic and Cavaliers. The Kings haven't done a good job of beating these lesser teams, but they did so handily this time. The Kings aren't good enough that they can take plays or nights off, and that was hopefully a tough lesson they learned after last week's losses to the Sixers and Bobcats.

I find it interesting after games to go read opposing team's game threads to see what they were saying about our players. Of late, I'm seeing a lot of respect for DeMarcus Cousins' talent, which as we know, has turned into big time production this year. While I'm not yet ready to call him the best center or big man in the NBA, I definitely think he can be one day. What he's been able to do this year is not a feat that has been matched very often in NBA history. Here's the complete list of players that have tallied 23 points, 11 rebounds and 3 assists a game by the age of 23: Kareem Abdul-Jabbar, Oscar Robertson, Tim Duncan, Charles Barkley, Bob Lanier, Sidney Wicks and DeMarcus Cousins. If you increase the age to 24 you only add Bob McAdoo, Elgin Baylor, Spencer Haywood, and Shaquille O'Neal. Cousins is turning into an elite player before our eyes.

Jason Thompson deserves a lot of credit for turning his season around these past couple weeks. Thompson has been very active on the defensive end lately and is racking up boards at an above average rate. Against the Cavaliers, Thompson set his season-high with 16. Jason is also being very efficient with his offensive looks, and is now at 52.0% for the season and climbing (he had been shooting a career-worst just a month ago). If Thompson can keep this up, it will be good for both him and the Kings.

When Isaiah moved to the starting lineup, the big question was who would handle the backup PG duties: Jimmer Fredete or rookie Ray McCallum. The answer at first didn't seem clear, with Fredette getting the main opportunities but doing so poorly that Malone was playing Isaiah Thomas 40 minutes a game and letting Rudy Gay handle the ball much of the time Jimmer was in. After a couple weeks of consistency though, Malone has grown to trust Fredette and he's getting a little more lee-way. Jimmer himself is looking much more confident and has really provided a spark off the bench. His per-minute scoring numbers are phenomenal and he's shooting at a good percentage as well. If he can keep it up, then the Kings probably don't need to go looking for another backup PG like Andre Miller (those talks appear to have gone nowhere), at least not this year.

Since Marcus Thornton has moved to the starting lineup, Derrick Williams has been the go-to guy for Sacramento's bench and it's been working. Williams scored in double-digits in each game this week (he came one point shy of having 14 in each game) and he did so by shooting 62.5% from the field. Williams is doing a good job of attacking the basket and getting to the line and when he's not doing that he's spotting up from three, where even though he isn't phenomenal there, he's enough of a threat that you have to respect his shot. This is a role that Williams can really blossom in, and there will still be opportunities for him to play with the starters when Michael Malone uses that big lineup with Thomas and Gay as the backcourt.

I really like what Quincy Acy has brought to the team. When there's a loose ball, he's usually the one diving to the floor to get it. It doesn't matter what end of the court it is, Quincy is bringing the energy regardless. He's a perfect bench big in that respect, and it's especially nice that he has some semblance of an offensive game, unlike most other guys that play his style of basketball.

8. Isaiah Thomas and co. stepping up their Defense

The Kings as a whole did a good job of stepping up their defensive intensity this week, but I thought Isaiah Thomas deserves an extra bit of credit for the job he did against Nelson and then Irving (Yes, I know Lillard scored 41 but he was hitting shots on everybody and from crazy spots). Those two guys combined for just 13 points on 5-25 shooting. With Thomas acting as the first line of defense, he needs to be playing defense like this on a consistent basis so this was good to see.

By all account, Carl Landry's rehabilitation is going well, and we could see him playing a game for the Kings before the end of the month. If Carl can bring what he does, he will add just another weapon to the Kings offense that already has so much. Him, Derrick Williams and Jimmer Fredette will be a nice bench for Mike Malone to play with, and that's assuming nobody else (like any of the SGs) steps up.

1. No consistency at SG

I think Marcus Thornton has been playing better as of late, but he still hasn't been able to find his shot from outside. Right now Marcus is shooting 37% from the field and just 31.0% from three. We know Marcus can shoot the ball, he's proven that in his first few years in the league. I don't know what's different this year but I hope he's able to find a way out of his rut soon.

As for Ben, he's still really raw, but it's disconcerting to see him miss so many wide open shots. It's way too early in his career to make a judgement of him, especially when there's solid data to show that shooters typically take a while to transition their game from college to the NBA. I guess I had just hoped that Ben would have been more NBA ready instead of how raw he really is.

The Kings win against the Blazers was indeed impressive, but man was that 4th quarter painful. For one, the Kings couldn't manage to definitively close out their opponent despite being up 18 points with just half a quarter left. Finally the refs were calling every little thing, whether it was a foul or not, and that turned a 12 minute long quarter into an hour long affair. There were 40+ free throws combined in the final quarter and it was just an exhausting affair. Fortunately for the Kings, they held on for the win.

I'm not putting this in the bad category because I think the Kings really needed Hamady N'Diaye, but only because I think he was a class act while he was here and gave a lot of effort whenever his number was called. Best of luck to Hamady for the rest of his career.

I won't speak too much on this because Greg said it better than I could in his own post on the matter. All I will say is that I hope the pro-arena group learns from this misstep so something like this doesn't happen again.

It's nice to see the Maloofs are spending their fortune wisely*

*said no one ever.

For as much as the national narrative has focused on how good the Raptors have been since they traded Rudy Gay, Gay himself is thriving in Sacramento. In his 15 games here, he's shooting at a career-high efficiency level and contributing in almost every other area of the game as well, from rebounding to passing to defending. I don't think Rudy will be able to sustain these percentages (the only SF shooting better right now is LeBron James), but I also don't think we'll ever see him as bad as he was in Toronto. Being able to play off of DeMarcus Cousins and Isaiah Thomas has taken Gay's game to another level, and Gay himself has upped his defensive intensity this week. If this is the Gay we get on a consistent basis, I have absolutely no problem with him being our SF long term.

Lot of good ones this week: One more thing on the refs

They better watch out for Rudy. 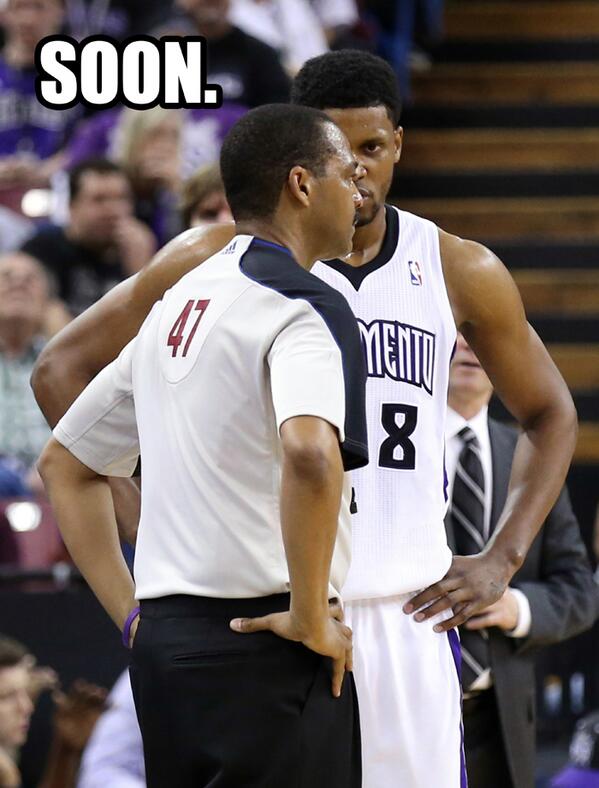 After researching the Maloof family, I can come to no other conclusion than I was wrong about the whole evolution thing. My bad. Sorry, and no hard feelings."

We disarmed Orlando's Magic with a counter spell!

re: Greg's Pete photoshop up there:

"Night gathers, and now my watch begins. It shall not end until my retirement. I shall take noPTO, claim no Outlaws, trade for no Salmons. I shall claim no attention and seek no glory. I shall live and die at my post. I am the voice in the darkness. I am the watcher in the halls. I am the shield that guards the realms of NBA 3.0. I pledge my life and honor to the Kings, for this night and all the nights to come."

and regarding the Jimmer to Denver rumors:

Big Cuz becomes the first player in NBA history to get a Flagrant Foul 2 against himself, he was promptly ejected.

Cuz gets angry at his headband for it's inability to defend him from sweat. 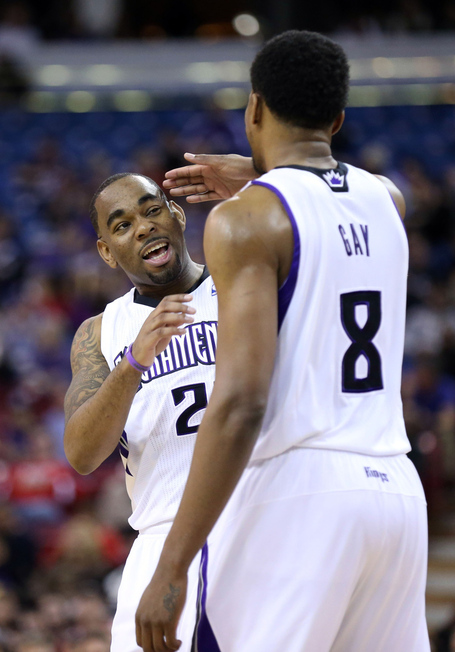 @ Indiana 1/14 L (The Pacers are an incredibly good and solid team and they match up well at almost every position against us. I will consider beating them in Indiana more shocking than the Kings beating the Heat)

@ Minnesota 1/15 L (The Timberwolves are a team that the Kings could beat, but I'm gonna give the advantage to the Wolves on the second night of a back to back for Sacramento. Cousins also always has trouble with Pekovic)

@ Oklahoma City 1/19 W (Shockingly I think the Kings can beat the Thunder, especially with Westbrook out. They don't have an answer for Cousins, and Durant will actually have to expend energy on the defensive end against Gay)

Nostradumbass Record for the Year: 14-21