The Kings almost came away with two road wins this week, but terrible late game execution cost them one (and nearly both)

2. Carl Landry is back

I'm honestly a bit surprised that Carl Landry is back as early as he is. I wasn't expecting him to rejoin the team until either right before or after the All-Star break, but now we will have him with us the majority of the season. That's good news for a team with a bench that has been inconsistent all year. Landry will hopefully provide a steady presence down low and reliable scoring both off the bench and in the 4th quarter.

JT has really been playing well these past few weeks, and I love how he's been fighting on the defensive end and on the glass. Against the Grizzlies in particular, he more than held his own against Zach Randolph, even with Z-Bo getting away with some fouls.

4. Ben getting some confidence back?

Ben McLemore has been uneven all year but the last couple games he's looked a bit better from the field. I don't even want or need Ben to develop into a star; I think if he can become a reliable 3 and D shooting guard (a la Danny Green), that's exactly what this team needs. With how much attention Cousins, Gay and Thomas draw, there will be open looks available.

5. Beating the Wolves and competing with the Grizz

The Kings nearly came away with two wins against two very solid Western Conference opponents this week, but poor late game execution almost cost them both (and did cost them one). Still, for the majority of both those games, the Kings looked and played like the better team. It was a team effort too. Rudy Gay went off against Minnesota, but we got big games from Isaiah, Cousins and D-Will too.

It was cool to open the Wall Street Journal this week and see the Kings on the front page because they had struck a deal to become the first professional sports franchise to accept bitcoin. The Kings will also be using Google Glass in an upcoming game to provide fans with a unique view of the game.

As this road trip has progressed, there have been some interesting trends in terms of the rotation. For one, Jimmer Fredette, who had been having a solid amount of games as a backup PG, has seen his minutes and role diminished in the past three games. Isaiah has been playing nearly 40 minutes a night because of it. There was also the perplexing decision to reinsert Marcus Thornton for Derrick Williams against the Grizzlies in the final minutes.

DeMarcus Cousins got off to a great start on this road trip, absolutely dominating Roy Hibbert in the first game and then out-battling Pekovic in the next one. But his games against the Grizzlies and the Thunder were subpar from what we've come to expect of him, with lines that remind of years past (12-37 combined shooting in those two games). If Cousins truly is an All-Star, he can't have consecutive games where he gets shut down because the Kings need him. To be fair to Cousins, this road trip is the big man meat grinder of the NBA (Hibbert, Pekovic, Gasol, Perkins, Ibaka, Davis, Dwight).

3. Rudy Gay gets outshone by other wings

Gay wasn't awful this week, and was indeed spectacular against the Timberwolves. But in the other three games, he was either a non-factor or limited. Kevin Durant killed him on his way to 30 points, and Gay even got ejected. Paul George erupted as well, and while Tayshaun Prince didn't score much, he did a good job defensively on Gay.

The Kings were awful in the 4th quarter this week, particularly late in the game. The Kings beat the Wolves, but nearly surrendered an 11 point lead with just over 3 minutes left because of poor execution. The same thing happened against the Grizzlies, except Memphis actually did pull off the comeback. The Kings had just three quarters all week where they scored under 20 points, and all three were fourth quarters.

News came this week that STOP had enough signatures to put the arena on the ballot. However that doesn't necessarily mean that the arena will come to a vote. As Blake explains, there are several things that can occur. For one, the City Clerk can throw out any petitions that didn't meet the election code. By some reports there are as many as 8 different petitions that were circulation, all with different language. Regardless of what the City Clerk decides, it's likely that these petitions will be taken to court either by the pro-arena or anti-arena sides at some point.

I would hardly call this a great week for Isaiah, and I'm sure if someone asked him he'd say the same. He set a career-high mark for turnovers in a game at 7 against Minnesota, and his decision making down the stretch of both the Memphis and Minnesota games was questionable at best. Still, Isaiah has been phenomenal this year and I think that because he's been playing so well (and he played 3 years in college) it's easy to forget that this is just Isaiah's 3rd year in the league. Yes, he'll make mistakes at times. That's what young players do. Thomas has already played for 3 coaches in 3 years and went through rotational hell (along with the rest of the team) under Keith Smart. I see talk from fans who want an upgrade to Isaiah, and that's easier said than done, because right now, there aren't all that many that are better (or available). Here's a link to the complete list of players who averaged at least 19 points on 45% from the field and at least 6 assists a game by their third year. There's only two guys on that list (Larry Drew and Ray Williams) that didn't become All-Stars.

In other news, sometimes my GIF experiments go horribly wrong

In reply to someone predicting that Thornton "finds a rhythm"

then he can go join a band and retire from basketball

Kings vs. Pacers Recap: Confusion Erupts as Demarcus Cousins the Only Player to Show Up to Game vs. Pacers by beeradgee88

"Cheer up, Marcus. Hey look! What's that behind your ear?"

The Great Rudini does it again. 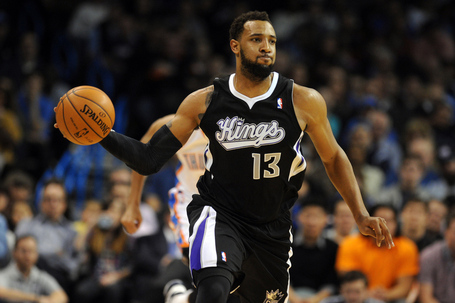 @ New Orleans 1/21 W (The Kings have to take advantage of all of New Orleans' injuries and win this game. It's their best remaining chance to get another road win)

@ Houston 1/22 L (I didn't think the Kings were going to beat the Rockets once, let alone twice this season. Three times is just crazy talk)

vs. Indiana 1/24 L (The Pacers are just too freaking good)

Nostradumbass Record for the Year: 16-23