The gradual erosion of the Kings' narrative

For every good win the Kings can muster, so fades the shine off their ever-relevant social stigma.

Share All sharing options for: The gradual erosion of the Kings' narrative

It's typical of me, as a die-hard Kings fan, to look at Rudy Gay's night and get giddy with excitement with what could be. And why not? After all, the 41 points, 8 rebounds and 5 assists that Gay tallied on both efficient and exciting means of scoring (a rare combination) came on a night where the Kings as a whole were clicking on all cylinders as well.

This in itself is in stark contrast to how things were supposed to go.  When Rudy Gay was dealt to Sacramento, his presence was supposed to lend itself to poor performances that led to inefficient losses or good performances that led to lost touches for the young and developing players.  Up to this point (and believe me I remain as cautious as anybody in getting too used to this style of play) that hasn't been the case for this team.

In the first quarter, the Kings' offense was humming.  DeMarcus Cousins looked to be well on his way to amassing a triple double (eventually falling short by four assists), the Kings were the far more aggressive team to start and as a result of their efforts they took a 38-20 lead on a dysfunctional-looking Pelicans team.

(By the way, a case that undermines the Kings' play on this road-trip can be built around the fact that both of their wins have come against two teams in the T-Wolves and Pellies that were probably self combusting at the time that we played them.  The Pelicans have lost 9 of their last 10.  And to that I say, "hey, shut up.")

Now, of course there are the reasons that the Kings' social stigmas exist in the first place and those found themselves a comfortable place to appear at around the midway point of the second quarter.

DeMarcus Cousins, from a purely on-the-court perspective, has received criticism for his lack of defensive effort and his inability to contain his emotions when handling both the officials and opposing players.  The play in the second quarter that resulted in his benching was the manifestation of those two qualities.  With 5:09 remaining in the first half, DeMarcus Cousins made a block attempt on Anthony Davis that was the result of a heady, but albeit late defensive rotation.  It was called a foul.  Upon further review, this foul call was reaffirmed, as Cousins had clearly gotten Davis with a forearm to the chest, but Cousins saw things a particularly different way and was rewarded a technical for his, uh...brashness? His way of handling the situation shifted the focus from that of sympathy ("Aw shucks, Cousins! You'll get that call next time!", they'd say) to that of pigeonholing ("well there's typical Cousins, can't handle both making and not making the play.")

Isaiah Thomas and Rudy Gay, in Cousins' absence, both contributed to the stagnant Kings' offense that allowed the Pelicans to trim a twenty-one point deficit at the time of Cousins' departure into a considerably more manageable eight by halftime.  Thomas was unable to pull the Kings out of an isolation-heavy offense that failed to put up points as consistently as earlier in the game while Rudy Gay midrange post-ups comprised a lot of the meat of those offensive sets.

The second half looked nothing like that second quarter, however, as the Kings jumped on the Pelicans early to put away the game. 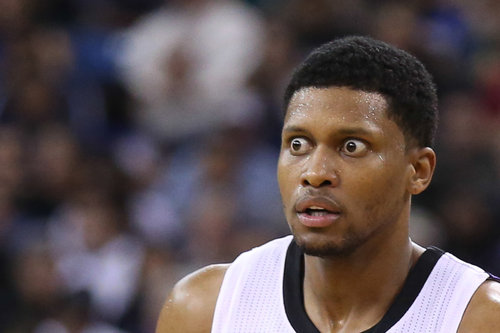 Rudy Gay had an otherworldly game, for Sacramento Kings' Small Forward standards, and an awesome game by any other measure.  He scored his points in a variety of ways, and demonstrated an efficiency that he's now kept up for over a month.  Maybe it's time to revisit the familiar confines of his national narrative.

DeMarcus Cousins finished the game with 18 points, 11 rebounds, 6 assists, 7 blocks/steals on 60% shooting.  With defensive inefficiencies that may lend themselves more to the fact that he's learning what might be his first actual defensive system in his 4 years in the league rather than that lack of effort, maybe it's time to do the same to the narrative of his.

But then again, maybe it's not.  Maybe Rudy Gay has turned up the attention towards his efficiency in the hopes of securing one last lavish contract extension.  Maybe DeMarcus Cousins really is an unreachable headcase, and what's become the norm for so long was really all there was all along.

But for the Ranadivé-era Sacramento Kings, this rebranding issue isn't a foreign concept at all.  It's clear that the more they can turn stretches like the last half of the second quarter versus the Pelicans into nothing more than an aberration, the farther they can go in removing the stigma that may be their largest roadblock in endearing themselves to the masses.