The Kings were featured in two blowouts (on the opposite sides of each), lost their two best players to injury and played one of their grittiest games of the past few years this week.

2. Good news all around on the Arena front.

First the Bee broke the news that the Kings had finalized a deal to buy the Downtown Plaza from JMA, a negotiation that had been going on for months. Then on Friday, the City Clerk rejected STOP's petitions on the grounds that they were fundamentally flawed, calling them some of the most flawed petitions she had seen. This will almost definitely be taken to court soon and we'll see if a judge is willing to overturn the Clerk's decision. Michael McCann tweets that that doesn't seem like a good possibility.

The Kings faced an undermanned New Orleans team and were able to take care of business. Rudy Gay had an awesome performance, scoring 41 points to go with 8 rebounds and 5 assists, the only Kings since Chris Webber to do that.

The Kings should have won this game, but the fact that they didn't doesn't take away from the incredible performance they put together. Marcus Thornton was fire incarnate, scoring 22 points in the 1st quarter and ending up with 42, tying his career-high. Thomas joined him with 38 points and while nobody else on the Kings scored that much, everyone who played contributed the same incredible effort with both Cousins and Gay out. As I wrote earlier, the Kings should be proud of the way they played.

DeMarcus Cousins was announced this week as a member of the 28 player pool for Team USA for 2014-16. That's a big honor for him and even while it's unlikely he'll play for Team USA in the next couple years, it's good for him to stay in the program and continue to practice and learn from the best of the best.

We had recently seen Jimmer start to get a bit more of a rhythm as a backup Point Guard but in the last couple weeks, his minutes have been reduced despite relatively solid play during his time on the court. Right now we could use a little bit more time from Jimmer if only to give Isaiah Thomas a bit of a break. Thomas played around 40 minutes a game this week, and that's too much for my liking.

2. Riding the starters down the stretch against New Orleans

Coach Malone did something strange this week when he kept his starters in for most of the fourth quarter against New Orleans despite being up around 20 points. I heard some arguments from fans that this was so they could learn how to close out games, but how much can you learn about closing games out when you're up by 20 points and the risk of getting injury to one of your players isn't worth it at that point.

3. Boogie and Gay out with injuries

The Houston game was a loss in more ways than one as both DeMarcus and Rudy suffered injuries early on. From that point on, the Kings were out of it. Fortunately for the Kings, the injuries aren't too serious, and they should hopefully be back sooner rather than later.

I didn't harp on this too much in my recap, rather focusing on the recap, but there's no question that this possibly cost the Kings the game (there was still enough time that it wasn't set in stone). I'm not sure why that play can't be reviewed when Jason Thompson's off-ball foul a few plays earlier was. If there was a foul, it was either before the shot as Williams fought through the screen or on David West for setting a moving screen, but not on the shot.

Isaiah didn't have the best shooting week, but he still managed to be very effective. In terms of scoring guards in the NBA, Isaiah has grown to be one of the best. The Kings really do need a reliable backup Point Guard though, as Isaiah has definitely looked a bit gassed as of late playing heavy minutes. Jimmer Fredette had seemingly picked up that role, but his minutes have been reduced as of late.

Since this is Akis first written post game recap since being editor of StR, I'm blaming him Hey, didn't somebody predict Rudy Gay with 41 for the Kings season high in the preseason Nostradumbass thread?

And he actually did. Of course Marcus Thornton has to go blow it up with 42 points later on in the same week.

Even at our current pace

1) Games that are enjoyable to watch. The last couple of years, by this point in the season I was wishing I hadn’t paid for league pass. That is not the case this year. So that would be a check.

2) Hope for the future. Is there a light at the end of the tunnel? Ever since Adelaman left, the most excitement has been how soon will the team change coaches, what stupid stunt will the Maloofs try now, and who will we draft. I’m still excited to see where we draft, but I love talking basketball this time of year. Check.

3) Are we playing at a playoff level. I really hate when people make the argument, "Yeah, but player x is not going to take us to a championship." Guys, none of our players have taken us to a championship. But just watching the old Kings get into the playoffs was awesome. I can’t wait to see the purple and black there again. I know we won’t make it this year. But I honestly think if we played all year the way we are right now, we would have a good shot at a post season. Check.

4) Finally do we have some long term pieces from a player, coach, GM, and ownership perspective? Owners? Check. Players, arguably at least a couple of checks. Coach and GM? Both up in the air, but I would be willing to give the the benefit of the doubt based on what I’ve see so far. Incomplete.

Bottom line, it is actually pretty darn fun to be a Kings fan again.

(Thanks to Carmichael Dave for the recording)

"I just want to throw this ball right at Blake Griffin's stupid face."

Derrick Williams prepares to throw the ball at Tom Ziller's cat upon hearing of his departure from Sactown Royalty. 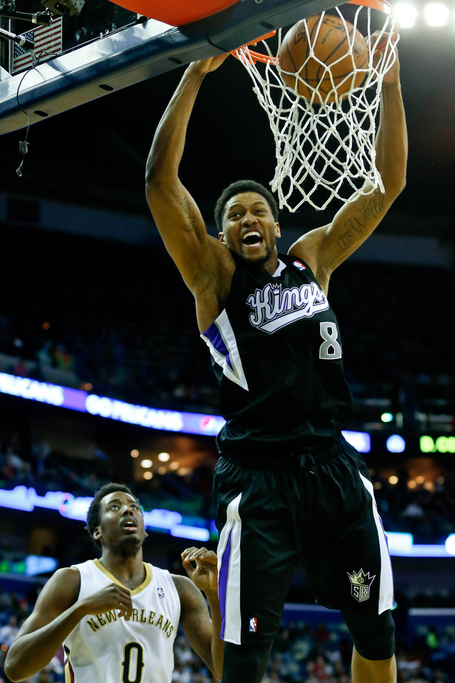 1/26 vs. Denver W (The Kings will probably still be without Gay and Cousins and they will really want this one after getting robbed against Indiana. Denver isn't nearly as good of a team as Indiana and we already beat them once this season. Let's do it again)

1/27 @ Utah W (Another case of vengeance as the Kings were blown out by the Jazz at home in their worst loss of the year. At least one of Gay or Cousins should hopefully be back by then)

1/29 vs. Memphis W (Revenge week! Kings lost to Memphis by 1 in a game that was again decided by a questionable whistle.)

2/1 @ San Antonio L (No Leonard but the Spurs are still an amazing team. The Kings played them tough last time, and that's all I can ask for again. I hope to see many of you at O'Malley's in Old Sac as we celebrate our first ever away-game StR Night!)

Nostradumbass Record for the Year: 19-23