We've seen a lot of versions over the last couple of years, but here is a peek at what the new downtown Sacramento arena will actually look like. Kings President Chris Granger joins us to chat about it.

Released shortly after midnight to Kings season ticket holders first, the public now has a complete view of what the arena, which is slated to be opened at the Downtown Plaza site in October 2016, will look like in the heart of downtown Sacramento.

Assistant city manager John Dangberg and developer Mark Friedman have stated their goal to make the arena a "grand civic space," and the renderings certainly demonstrate that by illustrating the idea of creating an indoor/indoor facility. 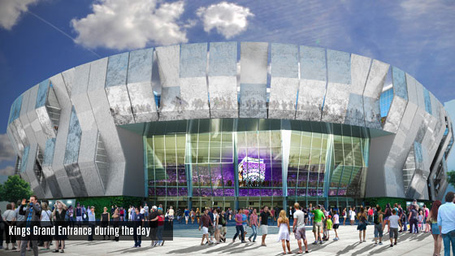 The glass "Grand Entrance," pictured above, will measure 50 x 150 feet (five stories high) and open up. The arena will also have multiple balconies, feature Farm-To-Fork programming throughout the facility and the skin of the arena will be constructed using materials such as glass, recycled aluminum and precast concrete.

The new arena would be larger than Sleep Train Arena (650,000 square feet, according to The Sacramento Bee - Sleep Train Arena is 442,000 square feet). The Bee also states that the new arena will have fewer seats than Sleep Train Arena (between 17,000-17,300). But the building would be constructed to allow more people to view the games through standing-room only spots and viewing opportunities. The design of the interior calls for "bridges" that will connect the horseshoe-shaped upper bowl and suite level. These bridges could also be used for standing-room only seating.

Kings President Chris Granger told Sactown Royalty that the arena will utilize other unique seating arrangements for both Kings games and concerts. In terms of concerts, the arena will be built to include rigging capabilities on both sides of the facility, allowing for a stage in more than one area.

"You could have a traditional stage set up that holds 17,000 or you could have a stage set up on this side where you have an entire building full, as well as our grand entrance open; and now you have 17,000 inside, 10,000 outside listening to the same music," Granger said.

"We're not putting the concessions on the inside of the bowl as you see in every other venue in the world. Our concessions are on the outside, so literally, anywhere you walk on the concourse you will be able to have a direct view into the bowl itself," Granger said. 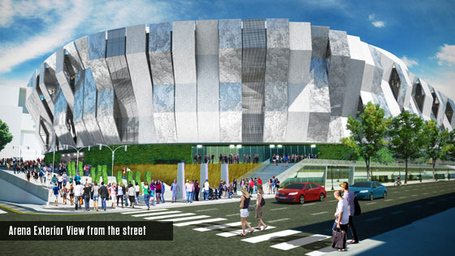 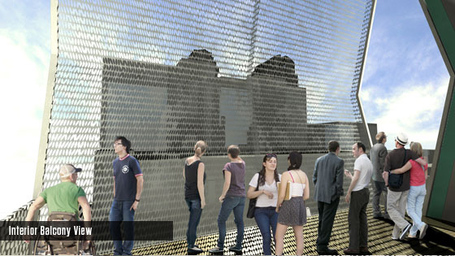 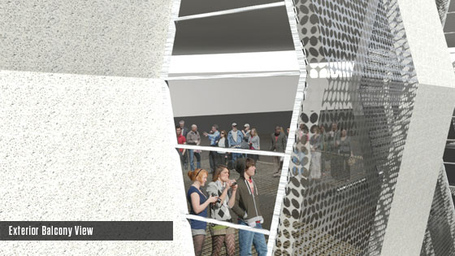 Here are a few renderings of the bowl. 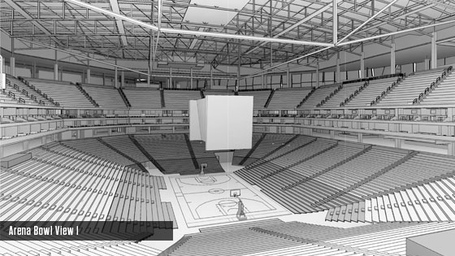 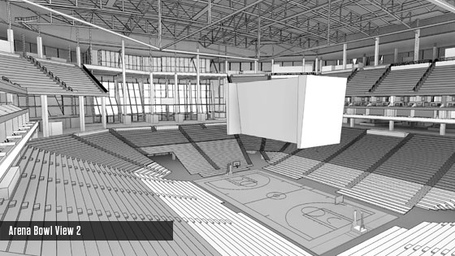 Other plans for the area surrounding the arena include a hotel, an office tower and apartments. While official details regarding these developments are unavailable at the moment, Granger hopes to have more information in the coming months.

"We're working with our partner JMA on that right now in terms of a business plan for the surrounding development," Granger told Sactown Royalty. "I would be guessing within the next eight weeks or so we'll have a greater sense of vision about how we will be distributing parcels between all of the space that we have right now."

Here is a video from Granger and Kings Owner Vivek Ranadive about the new renderings.

The city is expected to contribute $258 million toward the $448 million arena.

Last Friday, the Sacramento city clerk rejected Sacramento Taxpayers Opposed to Pork's (STOP) petition to put the city's financing plan on the ballot, citing numerous errors that violated election code. STOP has been mulling over whether to take legal action against the city clerk's decision, but no formal suit has been filed yet. Ryan Lillis of The Sacramento Bee reported Monday that the suit is expected soon, however.

Reports from election law experts say that any suit against the city clerk will have little chance of success. Here is Monday's report on this from Ben van der Meer of the Sacramento Business Journal.

And then there is this from Michael McCann, legal analyst for Sports Illustrated and NBA TV.

When asked on Tuesday if the city had had any communication with STOP since its petition was disqualified, the city clerk responded with: "Nothing."