Joel Embiid really would be a perfect fit for the Kings

Share All sharing options for: Joel Embiid really would be a perfect fit for the Kings

So long as the Kings star Isaiah Thomas, Rudy Gay and DeMarcus Cousins, rim protection is a huge, glaring need. Thomas and Gay allow guard/wing penetration with regularity. Cousins still struggles to make the right decision in guarding the pick and roll, and isn't any sort of shotblocker at the rim. Ben McLemore has also been troubling as a defender, but he's so danged young that you hope it's an experience issue. The other three have been around long enough that it doesn't seem like being a plus defender is in the cards.

The limitless potential of Joel Embiid

The limitless potential of Joel Embiid

I don't blame Jason Thompson for not being a stud defensive big man: that's not what he's ever been billed to be. I don't blame Michael Malone for not playing Hamady N'Diaye more frequently, because N'Diaye, bless him, has some other on-court issues and might not even be a plus defender in total. I don't blame Pete D'Alessandro for not having addressed this problem because he's already addressed a few other problems and there's plenty of time still.

But put all of it together, look at a game like the Kings' loss to Philadelphia, and it's plainly obvious that Joel Embiid would be perfect for Sacramento. Or at least the idea of Embiid would be a perfect match.

Embiid is the 7-footer from Cameroon who has perhaps been Kansas' best freshman this season, despite the presence of, you know, Andrew Freaking Wiggins. Embiid has a 7'5 wingspan and is considered a basketball savant; despite being introduced to organized basketball at age 16, he's quite skilled. This Bleacher Report piece by Jason King will make you lose saliva in envy. A key passage:

"He can do things that only a few people in the world can do," one NBA scout said.

It's no stretch to say Embiid is a basketball savant. Self calls him a "sponge" because he soaks up so much information. No college player in America has a higher ceiling than Embiid, and that's if he has one at all.

"It comes easy to him," Self said. "He moves like a 6-footer with his feet. He can move in a way that very few guys in the past have been able to move. There's a skill set there that very few 7-footers have.

"He has a natural feel, natural instincts. Of all the guys on our team, he's the most instinctive basketball guy we have."

Interestingly enough, Luc Richard Mbah a Moute "discovered" Embiid at a camp in Cameroon, where the former King is from. Embiid, who had no experience with organized basketball -- he was on track to play volleyball professionally, perhaps -- was good enough to make the team of five Mbah a Moute sent to South Africa for the big Basketball Without Borders confab in 2011. He was so good there against seasoned African prospects that he ended up leaving a comfortable life in Cameroon for a prep academy in Florida. That was three years ago. Now he's one of the best players in college basketball.

The top four defenses this season feature Roy Hibbert, Joakim Noah, Serge Ibaka and Andrew Bogut. All four are smart, skilled players. Their respective wingspans are 7'4, 7'1, 7'4 and 7'3. Again, Embiid's wingspan is 7'5. That's right in line with some of the best paint defenders in the world.

No prospect is a sure thing; Hasheem Thabeet was sure as heck long and had a record of successfully defending the rim. It didn't work out too well for him (or the team that spent the No. 2 pick on him). Notably, of the four paint anchors mentioned above, only one was a top-5 pick (Bogut, No. 1) and only two were even top-10 (Noah, No. 9). But based on the Kings' acute need for a defender who erases mistakes and Embiid's incredible promise ... man, that's a match made in heaven.

And yes, this is in fact a Sixers vs. Kings recap. Check out how many shots the Sixers got in the restricted area on Thursday. 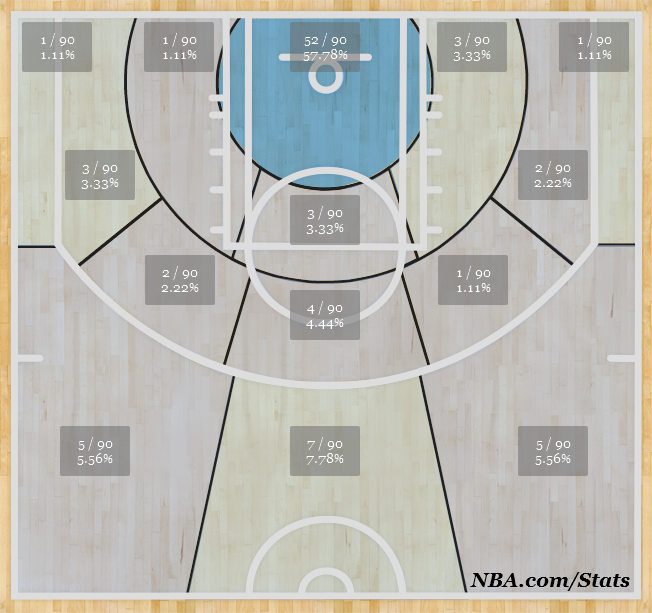