Share All sharing options for: The Good, the Bad, and the Ugly: 2014-15 Season Premiere

We're back!  Your favorite weekly series returns with a recap of what the Kings did this offseason, and a look forward to next week as the Kings begin the season this week.

1. Arena is full speed ahead

Last year we were just glad that the team stayed.  We still had to go forward with a new downtown arena though.  Fast forward a year and we're not just close to an arena, we're a few days away from shovels in the freaking ground.  Demolition is all but done and we'll start to see actual construction in a few short months.  We've come a long way.

The biggest question going into the offseason was whether or not Rudy Gay would opt in to the final year of his contract.  The $19.3 million was much more than he would have gotten on the open market but he would have been able to get some more long term security by heading to free agency.  Fortunately for the Kings he decided to stay for at least one more year.

See Player of the Offseason

When the Kings drafted Nik Stauskas, the general reaction was "Huh?".  Stauskas wasn't on most Kings fans' radar at the 8th pick, especially with Noah Vonleh and Elfrid Payton available.  The pick was even more surprising given the fact that the Kings used the 7th pick in the 2013 draft on Ben McLemore, the same position.  McLemore hadn't exactly lit the world on fire though, so adding Stauskas made more sense than many realized.  Stauskas also fit the needs of being able to shoot (44% from three in two years of college), pass and contribute immediately.

The Kings were one of only two teams with multiple players on Team USA for the FIBA World Cup: Rudy Gay and DeMarcus Cousins.  Both Gay and Cousins were active roleplayers in Team USA's gold medal run and it was an experience that will hopefully carry over into the regular season with improved focus on defense and the little things.

6. Mitch Richmond enshrined in the Hall of Fame

The Rock finally got the recognition he deserved, becoming the first NBA player enshrined in the Hall of Fame mainly for his contributions as a Sacramento King.  Mitch was one of the most underappreciated stars of his era, a time before NBA league pass and social media.  While he wasn't able to enjoy the success on the court that his talent warranted, it's nice to know that there were people that noticed.

7. Kings get a fresh new look

With new ownership, there's bound to be some overhauls of the team identity and such.  While the product on the floor is the most important thing, the Kings also made some changes to the floor itself, as well as giving the Kings some spiffy new uniforms with a retro-inspiration.

The Kings didn't make any splashy signings or trades this summer, they did manage to add depth at each position.  With Isaiah Thomas gone, the Kings added two very solid Point Guards in Darren Collison and Ramon Sessions along with Nik Stauskas to fill out their backcourt.  They also added a couple shotblocking big men in Ryan Hollins and Eric Moreland, as well as bringing back Omri Casspi for some wing depth.  Carl Landry is also gearing up for a healthy year, so the Kings could have more depth than they've had in years.  It remains to be seen if that will translate to more wins though.

Summer League is even more meaningless than Preseason, but it was still nice to see the young guys make an impact and win it all.  Ray McCallum, Ben McLemore and Nik Stauskas all had their moments to shine, and the Kings also found a potential gem in undrafted rookie Eric Moreland.

1. I hate the NBA lottery

For the upteenth year, the Kings dropped in the lottery, even though the odds of that happening were lower than usual.  Instead the freaking Cleveland Cavaliers win the lottery for the 3rd time in 4 years, and then used those picks to get Kevin Love while LeBron James came back.  Ugh.

The one bad side of Rudy Gay staying is that his $19.3 million player option killed the Kings cap flexibility for this season.  As such the Kings needed to make some trades to alleviate some of that cap pain.  To rid themselves of Travis Outlaw's contract and to make room for Omri Casspi, the Kings ended up using Quincy Acy as a sweetener in a trade with New York.  The Kings also had to give up two future 2nd round picks in another trade to rid themselves of Jason Terry.  These moves were necessary, but they weren't the sexiest of moves.

We heard a lot this offseason, particularly in the lead up to the draft, that the Kings were looking to make another big move.  That move didn't happen, even as the rumors continue to persist.  It's still possible the Kings will make such a trade this season, but right now nothing appears close to happening.

The Kings still don't have a real solution at Power Forward.  All the options (Jason Thompson, Reggie Evans, Carl Landry, Eric Moreland) are more suitable to bench roles.  To make matters worse the Kings have a lot of money tied up in both Thompson and Landry.  Of course, one or two of these guys could end up stepping up in a big way this season, but right now I think the Kings would still like to upgrade at the position while reducing some of the logjam.

The decision to not re-sign Isaiah Thomas was nothing short of baffling.  Even if the Kings didn't consider him anything more than a backup, to let one of the few assets you do have walk away for nothing seems pretty irresponsible.  Thomas would have been one of the best trade assets the Kings could have had, but instead they walked away with the draft rights of someone who will probably never play in the NBA and a small trade exception.  That's also completely ignoring the fact that Thomas simply is a better player than both Collison and Sessions.  Now the early returns on Collison and Sessions have been good, but hopefully this isn't a decision that comes back to bite the Kings on the ass in future years.

Player of the Offseason:

Boogie's spent most of this summer repairing his image, with appearances on Jimmy Kimmel, the B.S. Report and others.  He also proved to be a key cog on both ends of the floor for Team USA and the national media has started to take notice of his huge talent more than just his sulky demeanor. This is setting up to be a huge season for Boogie, and hopefully for the Kings.

FanPost of the Offseason:

Bigger than Basketball by HITMEN17

Highlights of the Offseason: 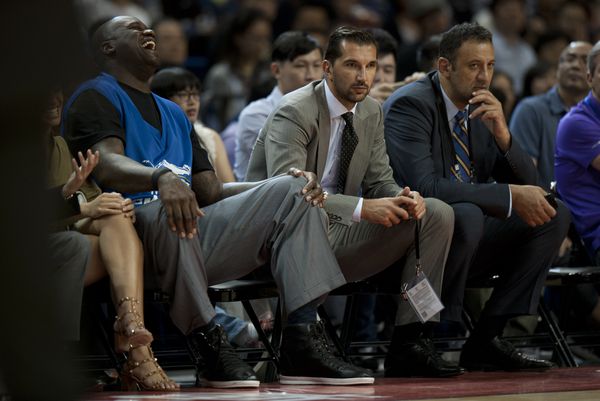 Nostradumbass Prediction for the Season:

My prediction is that Sacramento will finish 34-48. 22 of those wins will be at home as the revitalized fanbase carries the team to a few wins just through sheer energy. The Kings will still struggle on the road, but hopefully with their increased depth from last year they'll be able to pull off a few more wins. (This may or may not have been my exact prediction, word for word, from last season).

As for next week's games:

10/29 vs. Warriors W (The Kings are outmatched in terms of talent here, but the Kings tend to play the Warriors well and there's going to be a hyped home crowd for opening night. Let's go with the upset)

11/2 @ L.A. Clippers L (The Clippers are too good.  Also DeMarcus Cousins might get all five of his technical fouls for the season in this game alone.)

11/3 @ Denver Nuggets L (second night of a back to back in Denver? Yeah that's a tough trip)