It was another good week for Sacramento even though it ended on a sour note.  The Kings went 2-1, with their sole loss being against a very scrappy Oklahoma City team without their main stars.  Sacramento still ends the week at 5-2, a better record than any of us expected at this point, but the rest of the month is a meat grinder so we'll see what this team is truly made of in the next couple weeks.

Cousins has been playing on another level lately, and although the Thunder did a good job of containing him, he was a force in the other two games, only limited by foul trouble (he fouled out both games).  When Cousins gets position down low, it's really hard to stop him, and he's drawing fouls at a ridiculous rate.  Cousins' improvement has been the biggest reason for Sacramento's early success.

The Kings did a much better job of taking care of the ball this week.  They had turnover totals of 13, 15 and 10 (funnily enough the 10 turnover game was the only loss).  Darren Collison has been an excellent floor general so far, averaging 6.3 assists a game to just 1.7 turnovers.

Although he got into a little bit of trouble with Serge Ibaka on Sunday, Thompson deserves some credit for his excellent defense, particularly in the paint.  The only guys that really seem to bother JT are the ones that can take it outside, as we saw in parts with Darrell Arthur, Markieff Morris and Ibaka.  Still, he's worked hard on that end of the court and deserves recognition.

5. Omri Casspi and Carl Landry off the bench

Sacramento's bench has been pretty bad this season, but Casspi and Landry have proven to be valuable contributors.  Casspi is shooting over 50% from the field and not settling for jumpers while also pushing the pace and moving the ball well.  Landry has settled into the post and is shooting over 60% from the field, and probably should be getting even more touches than he is.  Both players are also doing a good job of getting to the line.

Rudy only had one bad game this week, a 5-22 outing against the Suns.  However he was dealing with a stomach virus all game and still toughed out 47 and a half minutes of play and hit what would be the eventual game winning bucket.  Rudy's currently averaging 22.3 points a game on 45.6% from the field and 37.5% from three and is also hitting the glass (7.1 rebounds) and passing (2.7 assists).  Rudy will have off-nights, but as long as his good nights continue to be as good as they have been, we can deal with it.

In three games this week, Cousins fouled out twice and reached 5 in the other game.  He needs to curtail these fouls and stay in the game.  Sacramento's so much better with him on the floor.

2. Nik Stauskas is coming along slowly

Nik had a better week this week but it still wasn't great.  His shot isn't falling with any consistency (32.3% from the field and 25% from three) and teams continue to attack him night after night in the post.  I thought he did a pretty good job in stretches against the Suns, but he's still got a long way to go.  Hopefully as the season progresses we'll see those shooting numbers go up, because Sacramento is still in desperate need of shooting.

1.  Kings get off to slow starts in Phoenix and Oklahoma City

The Kings probably should have been 1-2 this week, losing both against the Suns and Thunder.  Both games saw the Kings get off to terrible starts, and while they were able to grit it out and come back against Phoenix, they weren't able to do so against Oklahoma City.  That was a game the Kings should have won and could have won, and even though the refs were bad, you can't expect to play only one good half and win a game against any NBA team.

2. What's wrong with Ramon Sessions and why is Ray McCallum not playing ahead of him?

To put it bluntly, Ramon Sessions has been awful to start this season.  He had his best game of this season against the Suns on Friday and that was only a 9 point, 4 assist effort that still saw him with a negative +/-.  Sacramento gets noticeably worse on both ends when Sessions comes in, and on the season he's shooting just 23.3%, with a lot of those coming right around the basket.  This is abnormal for Sessions, who was pretty good in preseason and has been good during his career.  However, I don't understand why his leash is so long, especially when the Kings have Ray McCallum on the bench.  McCallum has been called "one of our best defenders" by Coach Malone in various radio interviews, and he gets put in for defense at the end of quarters, so I don't understand why he's seeing time ahead of McCallum.  McCallum has also proven to be versatile offensively, and I'd rather see him develop.

Pizza Guy 2.0 found his offense this week and it was a breath of fresh air.  McLemore came out this week much more aggressive, and continued to play very good defense.  Against Denver he helped hold Arron Afflalo to just 2 points.  In Phoenix, he hit some clutch shots in the overtime periods to help Sacramento win the game and against Oklahoma City he was the only one hitting shots down the stretch, including some pretty difficult step backs.  McLemore was once considered a top 3 pick for a reason, and we're finally seeing him hit his stride a little bit.  Now we'll need to see consistency, something he hasn't been able to do for long stretches yet.  If he can do that, we have a very promising young player on our hands.

Guess I was pretty excited 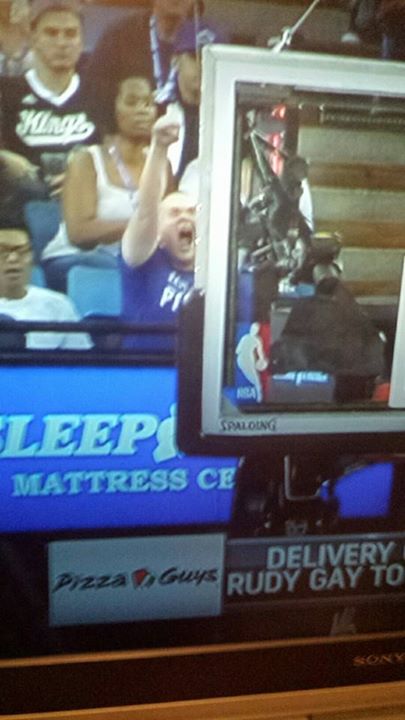 There are no words, only primal grunts for victory

I was at the game tonight in the upper section, great win!!

Couple things I noticed while attending that stood out for me.Reggie Evans It’s hard sometimes to watch him have the ball in his hands on offense but i fully understand now as to why he is given the ball. Yes it is to run the offense, but the guy has a knack for drawing fouls. It had to have been late in the third quarter where he drew something around 3 fouls on their bigs and got to go to the charity stripe to shoot two, two times. I think Pete loves that about him because it starts to put the Suns at a disadvantage when you are forced to play guys like Shavlik Randolph.

Boogie Cousins Good job for not being suckered into getting angry by the cheap out of bounds box out by the Morris Brother (Still don’t know which one it was if yall can help me out with that), Of course being in Phoenix the Jumbo tron focused on Cousins grabbing him by the neck and not the initial point of contact. Boogie may have retaliated or not but I’d like to see more videos before I make a decision. Also saw him pull Malone over for the 20 second timeout after that BOGUS blocking call, he’s bought into the system and I love it!!

Phoenix Arena When I first moved out here to Phoenix back in 2005 it was definitely a Suns town, stadium would always be packed and they were the best sport team to watch in town. Now almost 10 years later, Cardinals own Phoenix. Now a Friday night in Phoenix is is a tough sell to fans out here. Literally just across the street Krewella (EDM Concert) was also taking place, ASU students have been for the past week camping out in front of Wells Fargo Arena for the ASU vs Notre Dame game. And it’s also friday night, Old town Scottsdale and Mill Ave’s Bars are packed. Considering all of that, it was a little disheartening seeing A TON of empty seats. It was also never loud like howARCO was back in the day. They literally turned up the volume in the Arena to make it seem like its louder. Just a little disappointed in that. How ever some of the Suns fans I talked to are great people. Nicest fans to talk to.

Omer Khan is picked up by STR. Kings subsequently go 4-1. Aykis is looking like a genius.

Too early to dream about a Warriors-Kings first round matchup?

What you think the warriors are gonna fall to the 8th seed? 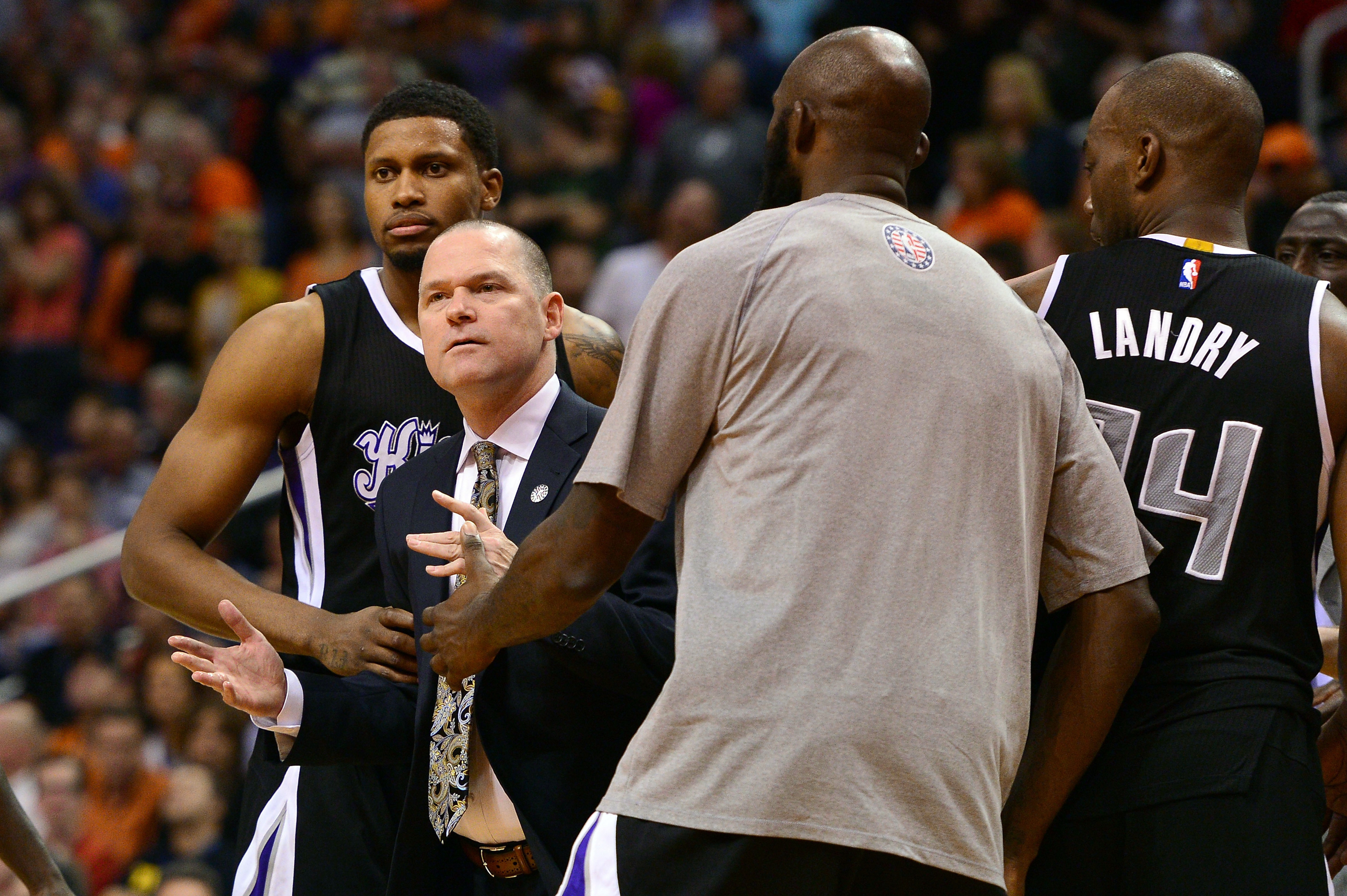 11/11 @ Dallas W (The Mavericks have the best offense in the league to start this season, but one of the worst defenses.  Hopefully the Kings can show some fortitude and bounce back from their loss to the Thunder to win in Dallas for the first time in forever.)

11/13 @ Memphis L (The Grizzlies are a very tough matchup for the Kings, matching up well at every position.)

11/15 vs. San Antonio W (It's StR night and the Kings have played the Spurs very close the last couple years, only to fumble at the end.  The Spurs are also playing Friday night, so perhaps they rest some of their big names on Saturday. Here's hoping the Kings have grown up a little bit and can figure out how to close this game)

Nostradumbass Record for the Year: 2-4