The Memphis Grizzlies pulled off an unlikely last millisecond play to steal a win from the Sacramento Kings. With only .3 seconds left in the game, Vince Carter inbounded the ball to Courtney Lee who had got himself free for a layup. Whether or not he actually shot the ball in .3 seconds is a discussion for another day, but there was also controversy at the time as to whether Ryan Hollins, who was guarding the inbound pass, was able to tip the ball as it traveled to Lee. If Hollins touched it, the play clock should have started at that touch and by definition Lee would have not had time to make the hero shot. The refs studied the replay film available to them and could not conclude that he touched it and so counted the basket.

But did the Sacramento Kings' Ryan Hollins really tip the ball or not? From the camera angles they showed on television replay it was hard to tell, but more video has emerged.

On the NBA's own Instagram page there is a video of the final play shown from a different angle which seems to shed a little more light on the answer to that question.

Unfortunitely the top of the video is cropped (on purpose or not) so that the actual tip attempt by Hollins is not shown. It does show, however, what the ball was doing as it left Vince's hands and then almost directly after it would have touched Ryan's hand.

If the ball changes it's motion, then Hollins touched it and the clock should have started at that moment and Lee never makes the shot because the clock would have expired. Kings win.

So does the ball movement change?

Here is a slowed down GIF of what the ball does immediately after it leaves Vince's hands:

Here is the first and last frame: 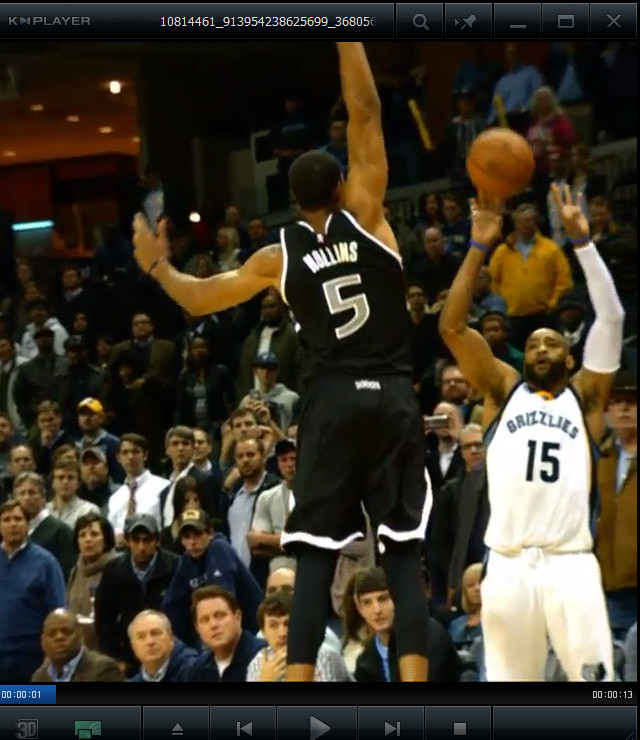 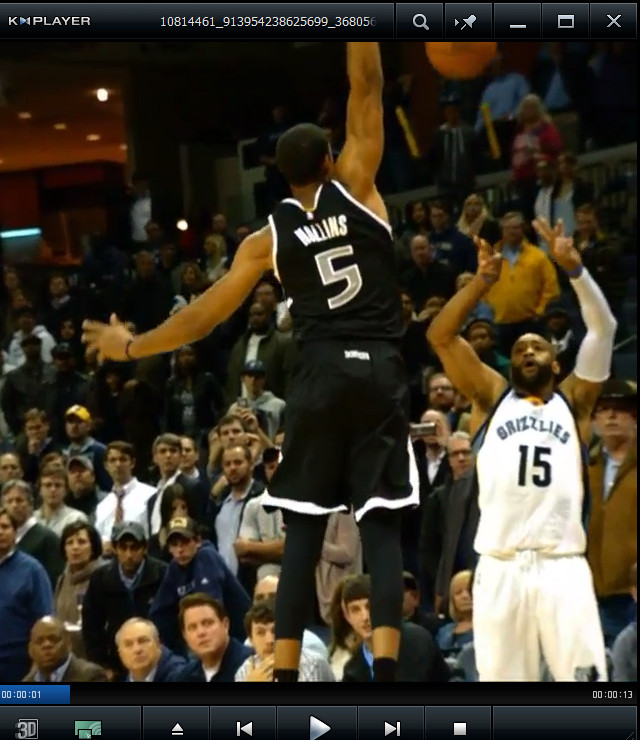 In the couple of feet that we are able to see the ball travel the logo stays pretty much centered and the seams are basically horizontal. It is almost a knuckleball with perhaps a very slight movement of the visible logo from the left to the right and a barely there counter clockwise rotation of the ball as it faces us, so slight that in 2 feet the ball has only rotated at most 20 to 30 degrees. There is no rotation from the right to the left.

So what do we see at our first chance to see the ball after the ball has passed Hollins' hand?

The ball has traveled another 4 to 5 feet and somehow the seams are now vertical! If Hollins didn't touch the ball, somehow in those 4 feet in mid air the ball decided to transform from a horizontal seamed barely moving knuckleball, to a vertical seamed ball.

And there is more:

The ball now not only has a quicker counter-clockwise spin, but it also now has a right to left rotational spin across the ball's equator as we look at it. A ball that was barely moving on one plane is now moving noticeably quicker on two planes. There is simply no way that the ball movement when the ball left Vince's hands could become the ball movement after it passed Hollins without something acting on the ball to change the movement.

So unless this is a magic ball (and I have no way to visually rule that out) then the evidence on the NBA's own Instagram page clearly shows that Ryan Hollins did make the hero play to save the game and was simply denied it because the replay evidence available at the time to the refs wasn't clear enough.

I don't know if the NBA will make a change or not (I've heard that the Kings are protesting the game to the league) but whether the result is changed or not, even as poorly as the Kings played they technically did not deserve to lose the game.

A Grizzlies fan posted a cell phone video in 1080P of the final throw-in from almost the perfect angle right behind Vince Carter looking towards the basket.

The Video can be seen here.

From that video I made a couple more pictures to look at. First I made a GIF of the actual tip zoomed in. You can decide if you can tell if Hollins' hand goes through the ball.

If you look closely you can see that the seams I talked about which were horizontal out of Vince's hands are turned vertical almost immediately after Hollins touches the ball.

But here is the ultimate proof that Hollins tipped the ball.

I took the video and captured the individual frames from when the ball left Vince's hands to when it reached the highest point. I then magnified them 200% and superimposed them on top of each other. I corrected for hand shake by making the backboard and shot clock in exactly the same point in relation to the other frames. Finally I plotted the ball in each frame. For the background picture, as a point of reference, I used the last frame in which Hollins had yet to touch the ball. The lowest 4 balls are before the tip, the highest 5 balls are after the tip.

From the resulting plot of basketballs it becomes undeniable that the ball indeed changed trajectory when it reached Hollins' hand. See for yourself. 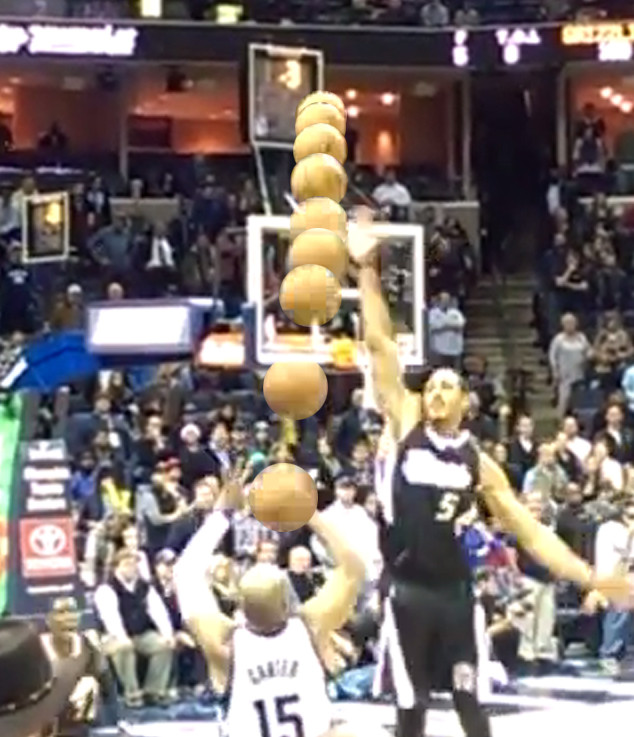 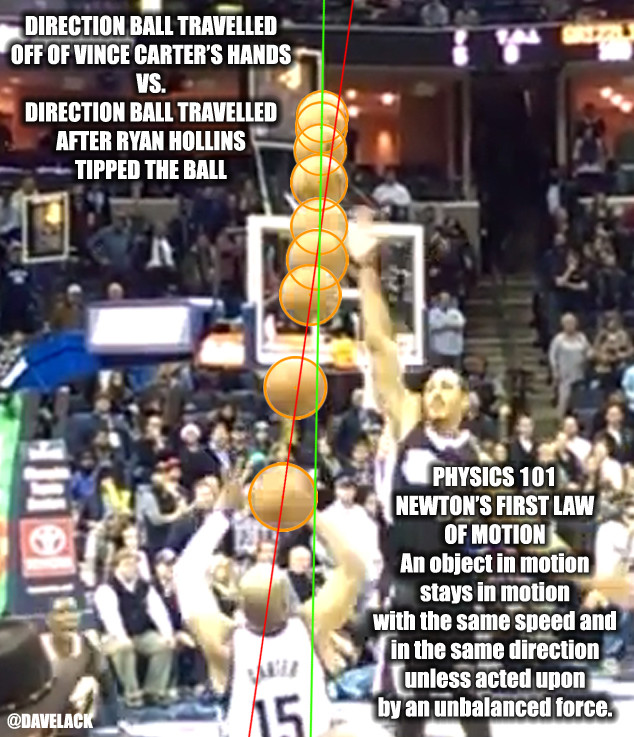 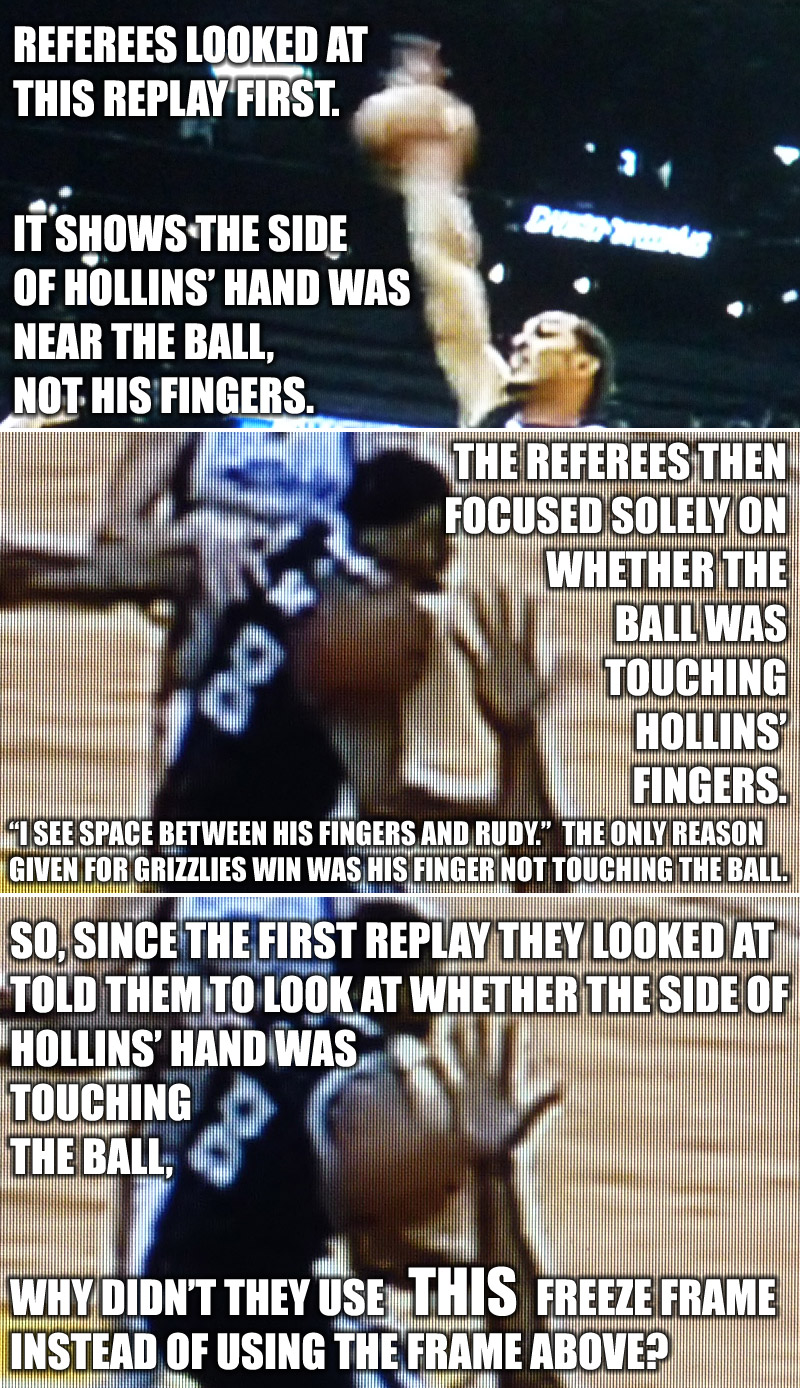 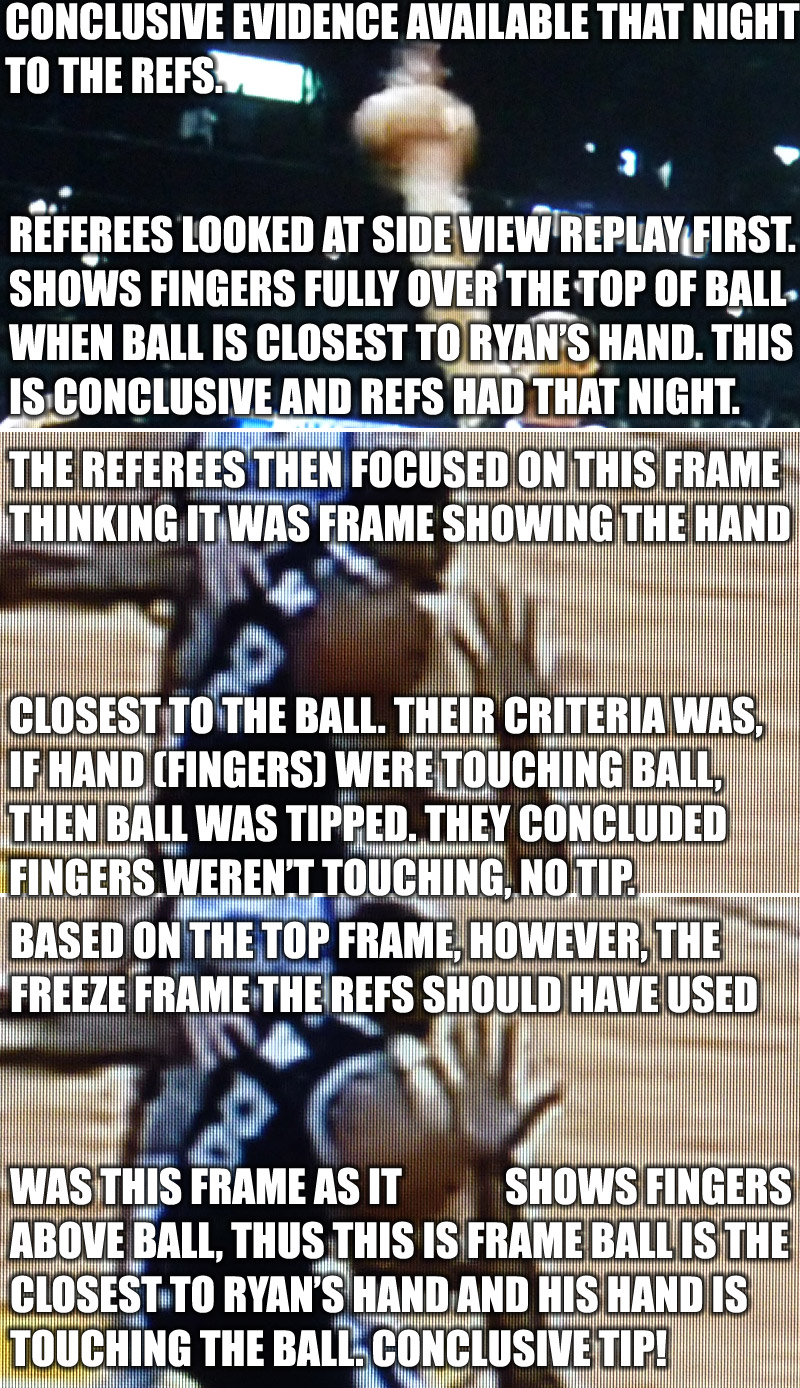 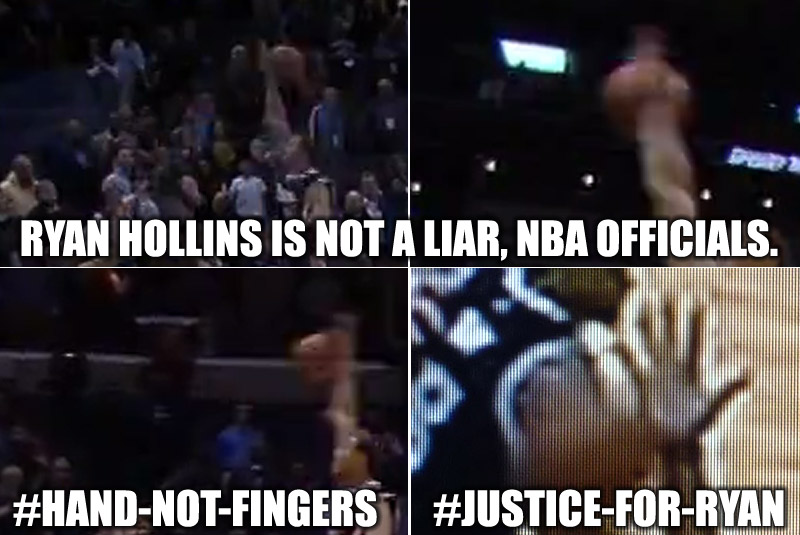 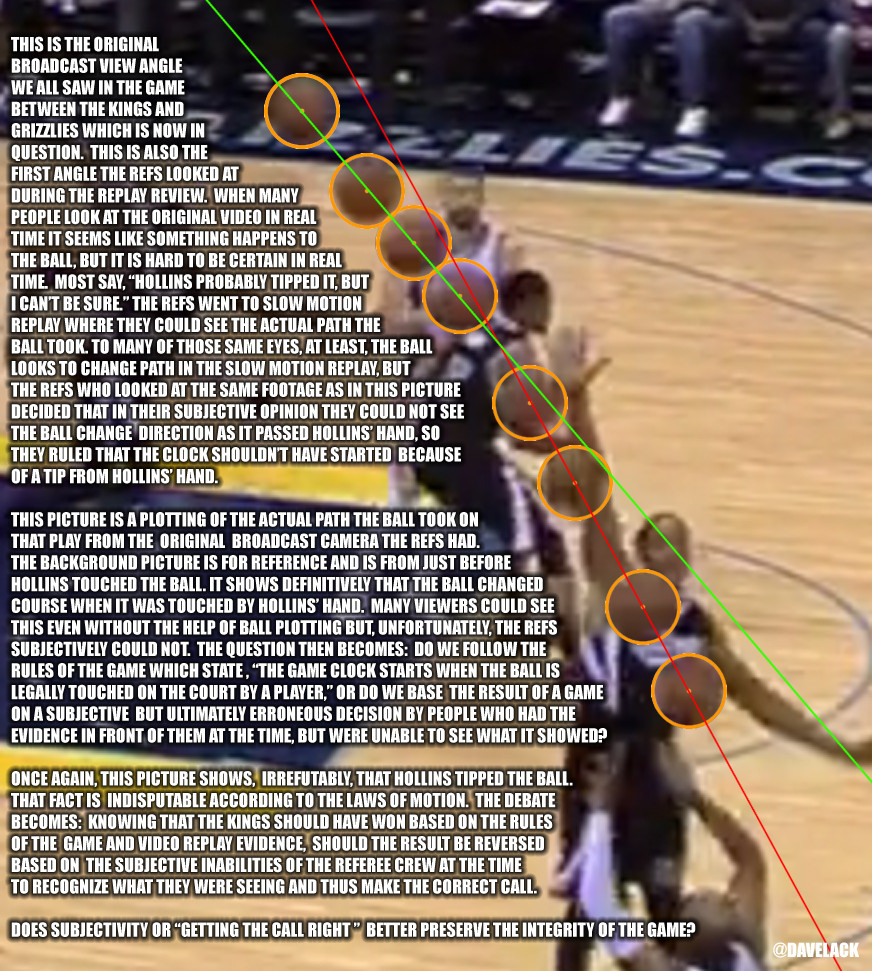 Kings should have won the game.

Other Fanposts by Dave Lack