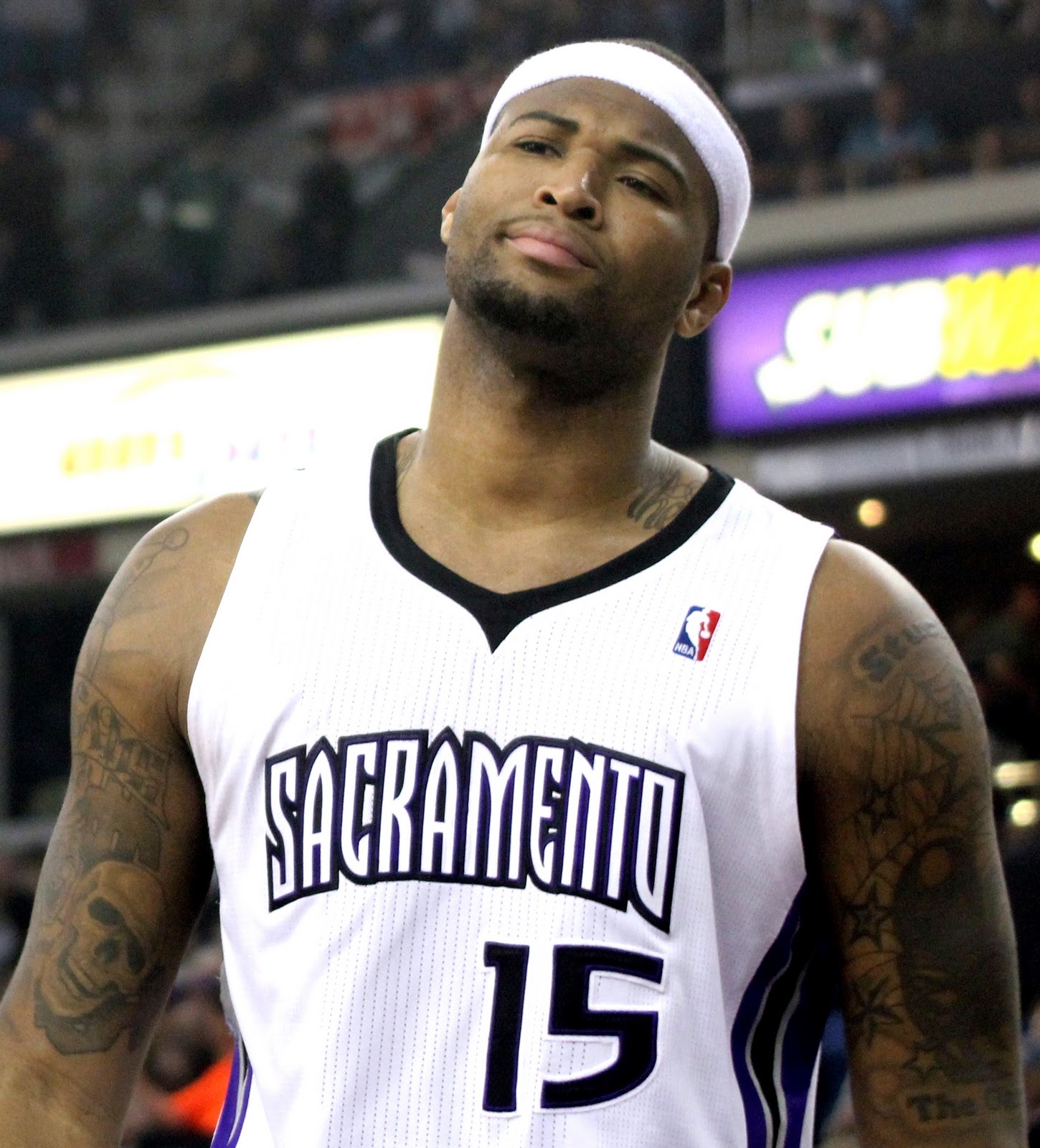 Before last season I wrote a post Evaluating The Kings Post Players that compared DeMarcus Cousins against the NBA post players that were selected to the 2013 All-Star Game. That piece showed statistically Demarcus was in the conversation but still broadly deficient statistically amongst his peers. I wanted to update how he performed last season against those who were selected in the West for the 2014 NBA All-Star Game. I also wanted to see how his season is shaping up against that same group of All-Star Bigs. I chose Per 36 stats to normalize the group as there were 4 minutes per game separating everyone.

For those that do not remember, or do not care to read my prequel, the list of Bigs included: Anthony Davis, Dirk Nowitzki, Dwight Howard, Blake Griffin, Kevin Love and LeMarcus Aldridge. I created a baseline that averaged the Per 36 stats across this group. Then I compared Boogie's numbers last year ranking him against the group. Below are the results:

Some obvious observations about his offensive performance. DeMarcus was last in minutes played mostly because of his injury but also because he averages 2 minutes less per game than the mean. Since only Kevin Love and Dirk Nowitzki can shoot from beyond the arc in this group it does not really matter Boogie was technically last in 3s attempted as the rest of the group lacked sufficient attempts to make any legitimate comparisons. While he improved significantly last season, his 2P% was 6th in this group and this to me is a key metric that needs to improve for him to be undeniably considered an All-Star caliber player. Turnovers were also a big problem for Cuz but I would expect more stability in the roster this season and as he and his teammates learn their roles and get comfortable in Malone/Corbin's offense and with each other, his turnovers should go down a bit. Given his high utilization though, he will naturally turn the ball over more due to the offensive going through him and teams being forced to double and sometimes triple team him.

Attacking the basket, forces fouls and subsequently depleting the other team's defense is an important strategy and Boogie is the best in the league. His Per 36 has him attempting free throws 9.3 times a game while converting 6.8. Although his free throw percentage was slightly below average last year at 72.6% his trend seems to indicate 3 tenths improvement per year and if he reverts should see him a respectable average of around 79%.

Rebounding was where DeMarcus really made his mark. And while it has been attributed to DeMarcus that his offensive rebounding has been inflated because of his own missed shots, Grantland debunked this recently in a great article called When A Miss Because A Rebound last week. In summary, a player who missed a shot, scoops up that miss and scores 5% of the time--DeMarcus led the league at 13%. That accounted for 78 of his missed shots last season. Over 71 games that equates to 1.1 self-generated rebounds per game without accounting for anyone else taking and missing a shot that he also might have gobbled up the offensive rebound which he averaged 10.6 last year. Net net, Whether or not he rebounded his own missed shot or a teammate's, only Dwight Howard edged DeMarcus out on the offensive glass at 3.5 to 3.4 and despite Dwight's amazing 71% career average inside 3 feet where 57% of his shots occur, it was Boogie last year that led the league in converting those misses into a score.

What is interesting to me is despite some chronicled selfish play on the Kings last year and horrific shooting from their wings, Cousins was still 3rd in assists out of these guys and I would be surprised if he doesn't lead this pack this season even if he never becomes a Joakim Noah.

Adding to his solid overall offensive performance last year, DeMarcus improved defensively as well leading the group in defensive (and overall) rebounding. While it should be no surprise DeMarcus' takes chances on D he still was rewarded with 1.7 steals per game substantially higher than the group's average of 1.0. I contend that even if it is not as sexy as a block, it is more effective since a turnover is the goal of playing defense. In fact Blocks are entirely overrated. Not to go too far on a tangent but Blocks should be categorized differently. Blocks that lead to a turnover should count as a Block. Blocks that go out of bound or led to a score by the offense should actually be considered a negative. DeMarcus being active while in the post guarding his man including, pushing, poking and swiping at the ball which contributes to his leading 4.2 fouls or 1.5 fouls more than the average--something he absolutely needs to improve on. I personally can live with the post plays where he is going to occasionally pick up a foul when his man makes a move to the basket, but after a turnover or missed shot where he lingers in a feeble attempt to take the ball from an opposing ball handler is ludicrous. DeMarcus...forget the goal of 5 technical fouls, how about no stupid fouls in the backcourt? I would love to see where his fouls occur (SportsVu hook this up please) and expect they would be around 1.5 fouls a game and are of the desperate swipe in the backcourt against the other teams better ball handler variety.

Rounding out his defensive strengths that often is over-looked is Charges Taken. His footwork is amazing and demonstrates his high BBIQ as he is able to anticipate, move, get set and take on the contact--which doesn't even show up on the stats above. Last season DeMarcus drew 36 charges which led the NBA and was as many as the next two namely Blake Griffin and Kevin Love combined. The other bigs don't even try to take the charges. This is arguably is better than a steal because it's a forced turnover and a foul on the other team.

Besmirched for his lack of rim protection, DeMarcus was much improved improving to 3rd on the list with 1.4 blocks allowing just 51.1% of shot attempts inside of 3 feet. There is a great article called 2014 Best Rim Protectors worth reading. Here is the highlighted chart of Rim Protectors in the NBA:

Looking at this chart you should be able to discern the horizontal axis measures what percentage an opposing players shoots while guarded by the named player within 3 feet of the rim. The vertical axis measures the average number of attempts at that range against the named player per game. DeMarcus while not an elite Rim Protector is also not deficient either. On top of the food chain is Roy Hibbert who's stingy defense allows only 41.4% shots made while Thaddeus Young at the other end of the spectrum allows a porous 60.2%. DeMarcus is a little better than average at 51.5%. In terms of number of field goal attempts I interpret this to vary based on pace by the opposition and the post combination. Two defensive anchors playing slower paced offensives will have fewer attempts against while a post player without strong counterpart playing higher paced offensives will have more attempts. So I am not sure it provides as much value as the the other but still shows how often opposing teams are attacking the paint against that player. I would argue that the fewer the number if adjusted for pace the better as teams or players are avoid the paint when that post player is there.In general it seems that too much emphasis on blocks in determining who is a solid rim protector perhaps because its a stat that shows up in the box score. I think this stat is more telling and a better indication of defensive skills. To take it one step further I can see a Defensive PER someday that incorporates steals, blocks that result in a turnover and charges taken to determine a more comprehensive view of defensive skill. This bears its own post but wanted to point out the issues with how define rim protection given the necessity of multiple data points to create a complete picture.

Although objectively it may be difficult to say unanimously that DeMarcus' performance so far this season will guarantee his selection to the next All-Star Game, It is fairly concluded by most in the sports media nationally after reading a number of articles as well as listening to the visiting team's broadcasters during the games that he should be voted in with some even saying he is on the short list of MVP Candidates. While it is way too early to declare anything, I ran DeMarcus' Cousins per 36 numbers this year through 13 games to see how his performance would have ranked against those same All Star peers last year and Demarcus has further closed the gap between himself and the that group of bigs. Take a look:

When you see DeMarcus' current production and see how it ranks against the average stats of last year's All-Star Bigs you can see that he has definitely made a case. As of yesterday he leads the league in rebounding at 12.3 per game. He is second amongst Bigs in scoring at 23.2 to Anthony Davis who has 26.3. When you look at the league leaders that have played at least 10 games and 30 minutes per game averaging over 20 points, 10 rebounds, 1 block and 1 steal per game that list is only two: Demarcus Cousins and Anthony Davis. I am happy to entertain anyone's analytical angle that says he is not an All Star in terms of overall production.

While his turnovers and fouls dilute his overall stellar performance this year, should he make improvements here and get his minutes per game up to 36, he will likely be in the running for MVP. He won't win but, I can see Most Improved Player being in the cards. Oh yeah, his one Technical in 13 games this season equates to 6.3 technicals for the season. That is a pace we can all live with.

In conclusion, DeMarcus Cousins has grown and evolved into one of the most dominant players in the NBA and while last year you could debate his exclusion, this season DeMarcus will be an All Star. It may not because the fans vote him in but he will likely be selected by the coaches.

Do you agree that DeMarcus Cousins is an All-Star now?