In the iconic finale of Dead Poet's Society, the student followers of John Keating demonstrate that they have bought in to his ideas by standing on their desks in solidarity with him. It has been a long haul, but the Kings players and fans have begun climbing on their desks in support of the new direction the team is taking.

We all know what happened during the off-season. Isaiah Thomas was let go as the starting point guard, Darren Collison was brought in as the new floor leader, and a whole lot of uncertainty and second guessing ensued. Five games in to the season it is, of course, too early to make any final decisions as to whether the move has paid off for the Kings, but Darren Collison is making a compelling case to that effect especially on the defensive end of the floor. And we all know that "Defensive Team" has been Coach Malone's stated wish for the Kings identity from the beginning. If the Kings starting the season at 4-1 isn't enough, then perhaps a few new stats will make a convincing case that Darren is currently playing, and leading by example for his teammates, as perhaps the best defensive point guard in the entire league right now.

At http://stats.nba.com the NBA has listed the sortable results of a new player tracking system. Using six cameras installed in the catwalks of every NBA arena, SportVU software tracks the movements of every player on the court and the basketball 25 times per second. The data collected provides a plethora of innovative statistics based around speed, distance, player separation and ball possession.

The following is a statement on defense. It makes no determination as to other valuable attributes of a team's or player's game.

The NBA has come up with what they call a Defense Dashboard. They use the cameras to determine a few things:

Defended Field Goals - The number of opponent's field goals made when a specific player is defending the shot.

Defended Field Goals Attempted - The number of opponent's field goals attempted when the player is defending the shot.

Defended Field Goal Percentage - The field goal percentage of the opponent when the player is defending the shot.

Frequency - Measures the frequency of a shot attempted within a specific area of the floor.

FG% - The usual field goal percentage of the shooter when defended by all players in the league.

And finally, the number that tells the story....

NET FG% - This is the difference between the FG% a player usually shoots and the FG% the player was able to shoot when defended by a specific player.

Since the cameras are able to determine exactly which shots are taken with which players defending closest, this makes it a pretty true measure of a player's one-on-one defensive prowess.

So let's look at Darren's numbers so far this year. 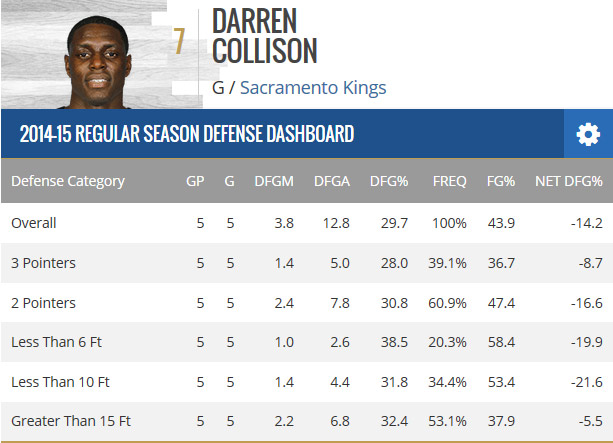 As we can see, the players that Darren is guarding normally average this season a 43.9 FG% overall. Darren has held them to only a 29.7 FG% overall. That means he is holding his opponents 14.2 percentage points lower than average, which is stellar.

How stellar, you ask?

Well, here is a list I compiled of all the starting point guards in the league right now (with a couple extra names of note.) ;)

Darren is leading them all in defense at an elite level.

Equally impressive is the fact that he has a negative NET DFG% in every category and in every position on the floor. If you look at most other players (and I invite you to go look for yourself) you will find that most who excel defending, say, 3 point shots end up defending poorly in the post and vice versa.

For example (since I KNOW everyone here is curious anyway how he is doing) here is Isaiah Thomas' defensive breakdown so far this year: 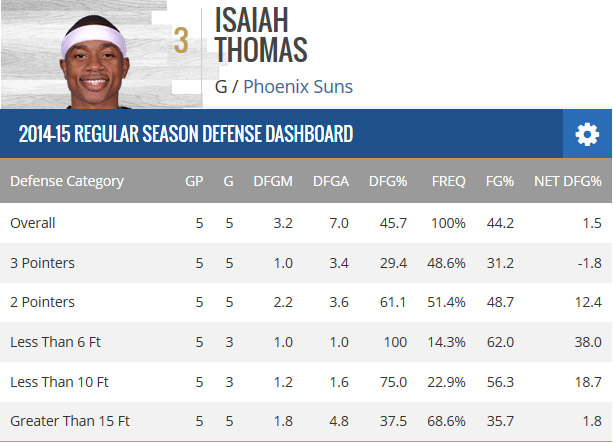 Important to note, though, is that Isaiah is by no means a poor defender overall and is right there at the league average for starting point guards.

Last year both Darren and Isaiah had nearly identical defensive numbers, so who knows what other means the Kings used to decide that Darren would be able to be the Captain of Defense that he has become for the Kings this year, but he has certainly become the perfect piece of the defensive puzzle for Coach Malone at least so far at this early juncture.

For a team preaching that they wish to be known for their defense, and knowing that defense starts in the perimeter, Darren seems to be the perfect fit.

Passes Per Possession - Where did Kings' ball go to Die

What the Kings are Thinking... but Can't Say Out Loud

It's OK, LeBron, To Be Afraid of the Biggest Challenge

Why the Sonics Left and the Kings are Staying

Does Kings' future hinge on NBA's willingness to admit a mistake?

SAC or SEA, the choice that benefits ALL owners more