This was probably the first truly bad week for Kings fans this year, which isn't bad considering we're almost a month and a half into the season.  The Kings went just 1-2 at home, and almost went 0-3 if not for a Carl Landry tip back.  All that's topped off with the news that DeMarcus Cousins has viral meningitis and won't be coming back any soon.  We could be in for a rough few weeks ahead while he recovers.

The Kings almost had another meltdown of epic proportions after the shorthanded Indiana Pacers fought back from 17 points down to send the game into Overtime and even took the lead in the extra period.  Rudy Gay and Darren Collison were being completely shut down after hot starts for both of them, so when Landry came up with the clutch basket, the sound that erupted through the arena was one of both joy and relief.

3. They call him Thriller

Derrick Williams has been playing a lot better lately as he's tapped into his aggressive nature.  Against both the Raptors and Magic, Williams provided a spark off the bench to help the Kings get back into games.  While the team lost both, it was not for a lack of effort from Williams.  With Cousins gone, the Kings need to find offense wherever they can get it and Williams has done a good job of stepping up in his absence.

Ben ended the week on a sour note with his worst performance in a while, but he was on fire against the Raptors and early against Indiana.  Ben's improved so much from last year and it's very exciting to think about the future possibilities given that this is just his second year.

Jason Thompson deserves so much credit for Sacramento's early season success, particularly with his dedication to defense.  He helped hold David West to just 6 of 16 shooting in the Pacers game and against Orlando he brought the offense to the tune of 18 points on 9 of 12 shooting.  JT is a key cog of this team and I don't see anybody clamoring to trade him right now, nor do I think we should.  He's proven his importance to the team thus far.

The Kings have not been able to keep opposing teams off the glass with DeMarcus Cousins gone.  The Raptors had a whopping 38.2% offensive rebound rate against the Kings and Orlando was at 27.8%.  Funnily enough, the one game the Kings did manage to keep the other team from getting a bunch of offensive boards was the sole victory this week.

I hesitated to put this in the "Ugly" category only because they came through against Toronto, where even Sessions had an alright game.  Still, the bench hasn't been able to provide consistent production all year and whenever they come into the game, the momentum seems to instantly change towards the opponent.  I think it's time we consider not playing all our bench players at the same time because it's killed us so far this year.

1. Boogie out even more

This is not what Kings fans wanted to hear.  When we first heard that Cousins would be out with a virus, most fans thought he'd miss a game or two and be right back.  Unfortunately, he's got viral meningitis which is going to keep him sidelined for at least a week more at the minimum, even after he's missed 6 games already.  Boogie just takes this team to another level and without him we're not as fun or competitive.  The Kings did luck out timing-wise in that their schedule is relatively soft, but as the loss to Orlando shows, even the soft schedule is no joke without Boogie.  Get well soon big fella.

I'm still not worried about Nik, but it's getting harder to ignore how much he's struggling.  We're basically a quarter of the way through the season now and he's shooting just 29.7% from the field and 22% from three.  This is not what we were expecting from Nik this year, especially after his strong preseason where he looked better than Ben McLemore.  Nik's confidence is clearly shook, and defensively he's providing less than nothing.  I wonder if a stint in the D-League with Reno where he can see the ball go through the net a lot will do him some good.

With DeMarcus Cousins out, the burden of carrying the Kings falls on Rudy's shoulders.  Rudy wasn't perfect in this regard (especially down the stretch of the Indiana game) but he still managed to put up some very impressive numbers, particularly in terms of efficiency and getting the team involved.  You couldn't really have asked more from Rudy than what he was able to do this week, DeMarcus is out, but what about...

Warriors have the Splash Brothers, we have the Clank Brothers

Carl's game winner was fun but I have to give it to Ben's throwdown:

DMC "OK, no technical for this finger. Lets try the next one." 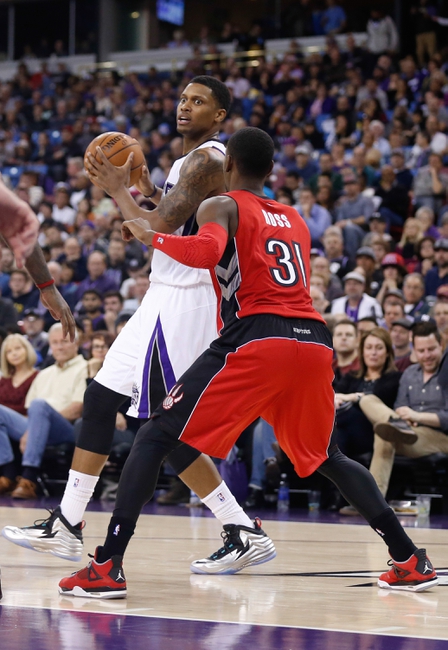 12/8 vs. Utah W (No Boogie makes this tougher, but the Kings have to protect homecourt against bad teams and Utah is a bad team.)

12/9 at L.A. Lakers W (The Kings are just a flat out better team than the Lakers, even without Boogie.)

12/11 vs. Houston L (Houston is a very tough matchup for Sacramento, and they should be healthier by the time they play this game.)

12/13 vs. Detroit L (Normally I'd give this to the Kings easily, but without Boogie, the Pistons have a major size advantage and the Kings have had trouble with them in past seasons even with Boogie.)

Nostradumbass Record for the Year: 9-11