The mayor delivered his State of the City address Wednesday night. He labeled 2014 the "Year of Groundbreakings." New arena renderings also were released.

Mayor Kevin Johnson highlighted the programs tied to the new downtown arena that will benefit the community and took a swipe at the group trying to put the brakes on the project Wednesday night during his State of the City address.

The mayor spoke for more than 40 minutes at the Memorial Auditorium, reminiscing on where Sacramento was just a year ago after it was announced that the Kings may relocate to Seattle.

"I remember looking out a year ago, the mood was a little somber," Johnson said. "But look at you now, you got a little pep in your step, looks like your mojo's back."

The mayor had his mojo going as he spelled out several benefits of the new downtown arena.

Specifically, he announced an "apprentice program" that would provide arena construction jobs to local individuals from disadvantaged backgrounds such as veterans and single parents as a "path to the middle class." He also said there will be a program in the new arena where unsold food after a game will be sent to the local food bank and homeless shelters. As far as art goes, Mayor Johnson said there will be a "public place program" where the arena will be used as a showcase for local artists.

He also reiterated that he wants to make sure at least 60 percent of the $300 million in work that is bid out on the new arena goes to local businesses.

Now that Sacramento has kept the Kings, Mayor Johnson said the city needs to keep its end of the bargain and build the new arena, and in the process, he took a shot at Sacramento Taxpayers Opposed to Pork (STOP), the group trying to force a vote on the city's $258 million contribution to the $448 million project.

"If we're able to keep the Kings in Sacramento it will be largely because it's a promise that we made to build an arena. Now we have to stay true to our word and build it. But we have to finish what we started and we must ensure that nothing stops us," the mayor said. "I said nothing will stop us; pun intended."

He went on to highlight how there will not be any new taxes as a result of the arena deal, saying that the city turned parking facilities that were not being used at night and on the weekends into an asset to finance the arena plan.

"This $258 million that we are talking about? It's not a subsidy. We aren't talking about writing a check or giving a handout to someone else and hoping good things happen. No, this an investment," Johnson said. "This building will be publicly owned, it will be owned by you, the citizens of Sacramento."

Further bringing the point home, he highlighted the ways in which the deal protects the city from risk.

Going back to the fight against Seattle to keep the Kings, Johnson recalled his feelings as the price of the franchise kept going up.

"I was a little worried when the number went from $450 [million] to $525 [million] and then I got a call from Vivek [Ranadive] one day, he said ‘I will do whatever it takes to keep the Kings in Sacramento,'" Johnson said with Ranadive in the crowd.

The arena is expected to break ground in September.

New arena renderings were released at the event as well. One is pictured above and others of the street view are below. 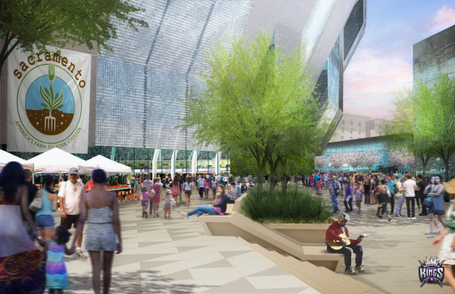