3-3 doesn't look so bad on the face of it, but the Kings wasted a valuable opportunity to get some more wins on a rather easy Eastern Conference trip.

I'm very proud of you guys for helping to donate 275 tickets to kids for Forever Silver Night, and that the Kings matched to make the total number 550. Those kids were treated to a great game and a sellout crowd, and those are experience and memories worth far more than the $10 it took to donate.

2. Ben McLemore in the dunk contest

The Kings will at least have one representative in New Orleans this weekend, with Ben McLemore set to be the first King in the dunk contest since Gerald Wallace. I'm actually kind of glad for the new format as well, because I think it suits Ben better than the previous one. Here's hoping he puts on a great show.

Player of the Week

4. Solid wins against the Bulls and Raptors

The Bulls and Raptors are two of the better teams in the East, and the Kings came in and played like the better team. Chicago was completely shut down from start to finish, as were nearly the Raptors, despite a late flurry of threes in the fourth quarter. These wins should have led into some good momentum for the road trip. Unfortunately it did not, but the two wins were impressive nonetheless.

Aggressive Jimmer is the best Jimmer and he came out to play in New York. He was hitting shots from all over the floor, and this one was my favorite:

It was nice to see Jimmer get going like that, and if he is still a King after the trade deadline, I would hope he takes the lesson he learned in New York to heart and guns it as much as possible. The guy is shooting almost 50% from three (#1 in the NBA) and he doesn't need much space to do it. If that was the last game for Jimmer as a King, it was a great way to go out and a good start to the rest of his career.

1. Rudy Gay's shooting has fallen down to earth

Hopefully it's just the flu that knocked him out for a game, but Rudy's shooting has been off since he came back. He was especially awful against the Wizards where he shot just 2-11 from the field. When Rudy isn't producing, the Kings' offense falls apart.

DeMarcus came back from his ankle injury and played two phenomenal games against the Bulls and the Raptors. Against the Bulls especially, he played some of the best basketball I've seen him play yet, completely dominating Joakim Noah on both ends. However, once the Kings got on the road trip, he looked different. He looked slow, especially on the defensive end where he gave up big games to the likes of Jared Sullinger, Anthony Bennett, Marcin Gortat and Tyson Chandler, none of whom are offensive powerhouses. I think this break might have come at the perfect time for Cousins, letting him rest up and hopefully get back to his usual self to end the season.

The Kings played 6 games in the past week and a half. In those games, the opposing teams bench scored more than Sacramento's bench 3 times, and one of the times they didn't, the other team (Washington), played just 3 bench players to Sacramento's 6 and produced just 2 fewer points. The Kings don't have a consistent scoring punch off the bench, and it clearly shows when most of the bench is in the game. Jimmer, while he had a great game against the Knicks, was miserable in most of the other games. Ben McLemore is raw. Derrick Williams is inconsistent. There's some potential here, but it's long term promise.

Despite the great win against the Knicks heading into the break, this was an awful road trip. Most teams couldn't ask for an easier trip, with 4 games against sub-.500 teams in the much weaker Eastern Conference with teams missing key players. For a Kings team coming off two very solid wins against the Bulls and Raptors, this road trip was a chance to get some wins before the break, and were it not for some clutch shooting and a career performance from Jimmer, it might have been a winless one.

Of Sacramento's three top scorers, Thomas was the only one that came out to play consistently in all six games. For his faults (and he does have them), Thomas' effort is never in question. I also thought he and DeMarcus did a good job of playing the Pick & Roll this week, something that I'd like to see them continue, although perhaps with a bit more emphasis of DeMarcus rolling to the rim so as to avoid awkward backward passes. Thomas is perhaps the King in need of the All-Star break the most, as he's healing a sprained left wrist as well as having played the most minutes of any King. He, Jason Thompson and Ben McLemore are the only Kings to have played all 53 games but Thomas has played nearly 300 more minutes than the next highest King (DeMarcus Cousins).

Looks like we rattled Joakim quite a bit tonight.

Yeh, that's Cuz taking the bull by the horns...It's a metaphor. But that actually happened though. 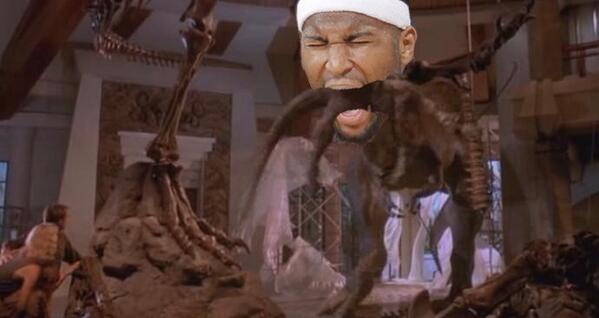 In regards to Williams not being a wing defender:

Did you see him put a stop to that break away dunk attempt last night?

On what Ben should do in the dunk contest:

IT dresses in a ref uniform

Cousins argues with him, holding a basketball. Isaiah calls a technical on Cousins, who gets pissed and angrily throws the ball over his shoulder. The ball goes high, bounces once, and sets up a perfect McLemore alley-oop.

Now take a piece of cake and pass it down. No, don’t eat that piece…oh well, pass the next piece. Dammit! You’ve eaten two pieces now and no one else at the table has cake yet. Now let’s try cutting another piece and let’s see if you can pass that one…oh for f*ck’s sake! One more time and I’m taking your booster chair away. No, Jimmer dear – thanks for the offer but if we let you pass the cake out it will wind up all over the floor. But we better get this resolved fast – if DeMarcus doesn’t get his cake soon there’s going to be trouble. Ben, can you put the empty cups in the trash can, please? No dear – in the can…in the can…oh forget it.

Among the slow-footed bearded brotherhood of pale-complected players whose shorts hit above the knee, good sportsmanship is always in-style.

Aaron Gray sets the greatest screen of all time. 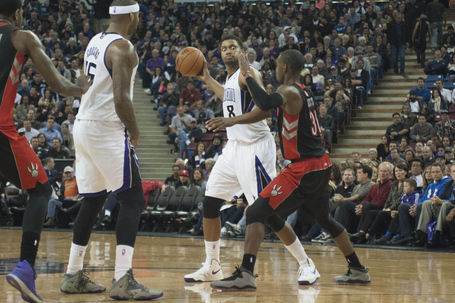 v. Golden State 2/19 L (The Kings and Warriors traditionally play close, but I think the Warriors have the decided advantage now. I also think the Kings will be a tad shorthanded with the trade deadline on Thursday)

v. Boston 2/22 W (Michael Malone will not let his team forget the embarrassing loss to the Celtics last week. Also they should be infused with energy from new guys.)

Nostradumbass Record for the Year: 23-30