How will the Kings approach the upcoming trade deadline?

Sacramento has been more active than ever in trade talks this year and have already made a couple of big moves, but will any more come this week as the trade deadline approaches?

Share All sharing options for: How will the Kings approach the upcoming trade deadline?

This Thursday at noon is the NBA's trade deadline. As we've discussed before, the Kings have plenty of holes to fill. The defense needs an upgrade, a secondary point guard would be nice, as would some consistent bench depth.

But despite those holes, and the desire of the Kings to rid themselves of one of their bigger contracts (Jason Thompson, Marcus Thornton and dare I say it Carl Landry), I could see this being a quiet deadline for the Sacramento Kings.

For one, the Kings have already given up a lot of their more valuable assets in trades to acquire Derrick Williams and Rudy Gay. The most valuable assets the Kings have left are DeMarcus Cousins (the closest thing to untradeable on this roster, since the only guys that the team would trade him for are likely untradeable themselves), Isaiah Thomas, and Ben McLemore, none of which I foresee the Kings wanting to trade unless the return is good.

Also, trading Thornton, Thompson or Landry will not be easy. In this new CBA, flexibility is paramount, and those players take that away with their own contracts. Thornton's is the easiest to move as it ends after next season, but even so, why would a team want to get rid of one of their own expirings for Thornton? Is there a team out there in desperate need of an inconsistent scorer who needs to be a focal point of the offense to be effective? Thornton's value has sunk to the point that I'm not sure the Kings could get rid of him unless they take on a contract with more money or years on. For example, I could see a Thornton for O.J. Mayo trade working for both teams if the Kings believe he could also double as that secondary ballhandler and bench scorer, while it cuts some salary for the Bucks and gives them a scorer on a team with none.

Thompson is a much move valuable player, in that he can play both PF and Center, rebounds well, scores efficiently enough, and isn't a complete disaster on defense. The problem with trading JT however is that his contract lasts for 3 more years, although the last year is just $2.65 million guaranteed. The team that trades for him would have to see him as a viable long term piece, which he could be in the right situation. One trade I've batted around for a few weeks now is Thompson to the Clippers for Jared Dudley and one of Ryan Hollins/Antawn Jamison/Byron Mullens. The Clippers need a reliable bench big and Thompson is much better than the Hollins/Jamison/Mullens hydra they're tossing out now, while Dudley, who has fallen out of favor with Doc Rivers, would be a solid 3 and D two guard for the Kings.

The one consistent thing we've heard from the Kings is that they want another ball handler aside from Isaiah Thomas. Andre Miller is the biggest name that's been mentioned, as has Luke Ridnour. But who would Sacramento give up to get one of those guys? Jimmer Fredette? In my personal opinion, the Kings shouldn't bother trading for an asset like Miller/Ridnour that would make them better now (and in the case of Ridnour, becoming better now is not assured) if it's not going to make them better in the long run.

Thunder searching for a shooter 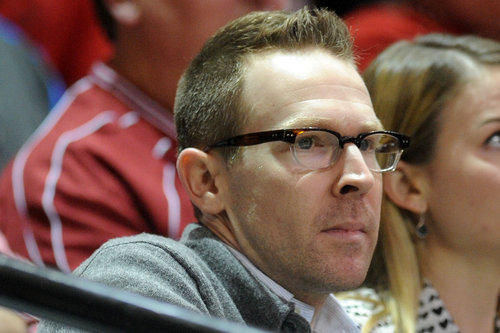 The Thunder are exploring trade options. Could Sam Presti have something up his sleeve?

In the case of Jimmer Fredette, I'm not sure what kind of trade value he holds either. He's an expiring contract, meaning any team that trades for him now could simply go after him this summer when he's a free agent. The only teams that I could see trading for him now are those that believe he could help them in the playoffs. Oklahoma City perhaps? They're rumored to be looking for another shooter (Jimmer currently leads the league from three) and he'd be an upgrade over Derek Fisher's mummy at least, and could play next to Russell Westbrook when he came back. But what would they give us in return? Said mummy? No thanks. If they offered the 2014 1st rounder (top 20 protected for next 3 years) they have from Dallas too? That's another story.

Then there's Isaiah Thomas. It's kind of hard to get a read on how the Kings feel about Thomas. We've heard persistent rumors that the team would like a more pure distributor, and they did make sure to get Greivis Vasquez back. D'Alessandro's trade history (small sample size institute approved) has been of the buy low variety. There's two sides to that strategy though, with the other being sell high. Thomas' trade value has never been higher and likely never will be again since he's set to get a good sized contract this summer. Personally, I want to keep Thomas, and I don't think the Point Guards that would be an upgrade to him are attainable. I also think his restricted status, as well as the lack of potential suitors in need of a PG this summer, will allow the Kings to keep him at a reasonable price. But if the Kings were to trade him? There wouldn't be a better time to do it. Who would they go for? If the Kings would rather sacrifice some scoring for a more pure point guard, there's a couple potential candidates: Jeff Teague and Ricky Rubio.

Teague is the superior of the two options, with his excellent athleticism and ability to get to the rim. He excels playing with a big man that draws attention, as evidenced by his diminished production this year with Al Horford out. Rumor has it that Danny Ferry isn't all that enamored with his contract (4 years at $8 million each) which I personally find very reasonable. The Hawks also have rookie Dennis Schroeder waiting in the wings who they have high hopes for.

Rubio is someone I hadn't considered as available until someone tweeted an Isaiah for Ricky swap suggestion at me. The Wolves are a team that desperately wants to make the playoffs so that they can convince Kevin Love to stay, and right now they're on the outside looking in. There is absolutely no doubt in my mind that Thomas is the better player right now and probably for the near future, especially considering that Rubio is in his third year and shooting a career-high 36.1% from the field. But this would be a big "buy low and sell high" trade (and a big gamble that Rubio will fulfill his potential) for the Kings to make, and it would give them the type of PG that they're seemingly searching for.

Whatever the Kings do this trade deadline, it should be with the future in mind. There are good pieces, but not enough to complete the puzzle. Come Thursday, I'll be ready for anything, but I also won't be surprised to see nothing, given the difficulties in trading certain players as mentioned above. Rebuilding doesn't have to happen all at once, and the Kings shouldn't make moves for the sake of making moves. More opportunities will come, and the Kings are a team that can afford to be patient.

News and Rumors from the 2014 NBA Trade Deadline