I just heard the news you have gone to the Nets. While I am sure many others here are happy you are gone, I’m sad to see you go.

Ever since you got here in 2011, I loved watching you play. The way you could single handily effect the momentum of a game in the matter of one of two minutes was always so incredibly exciting for Kings fans. I got to you meet you on a practice day after you signed your contract for 4 years. I remember saying "thanks for signing here with us." And you just said in response "Hey, the fans here have been great to me. I love you guys."

In 2012, I went to the blackout game against the overwhelming favorite Thunder. We were down by four with about 2 minutes to go, and you just hit back to back 3 balls like it was nothing to give us a two point lead. We ended up going on to win that game, completing an amazing night at Arco Arena.

Then there was the game in Miami in early 2013 when I thought my phone was broken when I saw:

I was in class refreshing my phone. We went from being down 9 with a 1:20 to go in the 4th to making it a tie ball game. I immediately ran out of class to my car to listen to the remainder of the game. While we still lost in double overtime, I can’t believe we almost stopped the Heat in the midst of their 27 win run.

Then there was that Clippers game in 2013 at the final hurrah in Sacramento to keep our team there. We were down by 16 or 17 I believe when Thornton caught fire. He sparked a run that put us up by 2 late in the 4th quarter before we gave the game away at the end. I’ve never heard it louder at our arena when Thornton kicked it out to Patterson for that wide open three. In all the chaos of whether we would keep our team or not, I sat down for a moment and just cried.

I remember during that very timeout they gave away some oil paintings to the most dedicated fans. I had my face painted for the game, and somehow the dance team came to the upper level into my section. They gave me the painting. And what do you know? It was a Marcus Thornton painting. After the game, he even signed it for me. 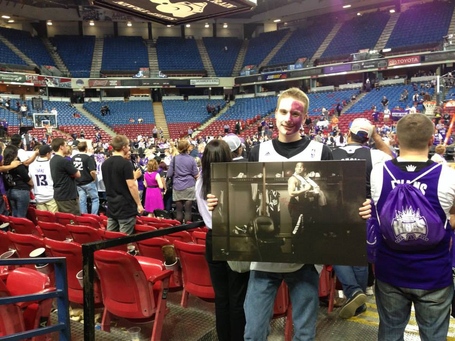 I know a lot of you disliked Thornton for the body language, the fact he had a horrible year, or just because you think he looked like a dog. Personally I think he has had such a bad season because of his mom’s cancer. But for me, he was my favorite player in these last couple years of turmoil.

Thank you for your time in Sacramento Marcus Thornton. I wish you the best of luck on your next journey.