The view from Section 140

I went to the Kings game in Denver, and watched the Kings get a rare win in the Mile High City.

Share All sharing options for: The view from Section 140

I love when the Denver Nuggets are a bad team.  Not because I hold any particular ill will towards the Nuggets.  Living in Colorado, the Nuggets are a team I pay attention to, and it's fun to go to their games.  But when the Nuggets are bad, I can get awesome seats for very little money.  I was lucky enough to enjoy Sunday's Kings game against the Nuggets from the lower level. 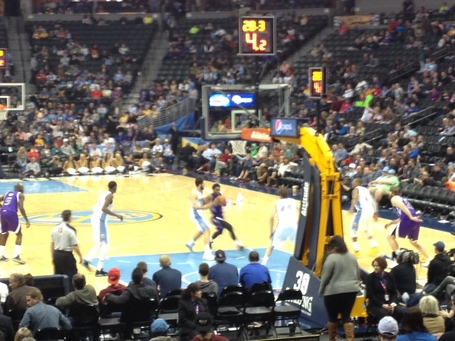 The Kings started out strong.  DeMarcus Cousins had 9 points halfway through the first quarter.  Unfortunately he also had two quick fouls.  Whether the calls were good or not is negligible.  But in the NBA, you generally spend the first quarter figuring out how the refs are going to call the night's action.  DeMarcus, however, immediately went to work jawing at the refs.  And wouldn't you know it, they became more reticent to call fouls in his favor.  Weird.

Isaiah Thomas was magnificent.  I went to the game with a friend who is a casual Nuggets fan.  He was blown away by Isaiah.  Luckily Denver was without Ty Lawson, who missed the game with injured ribs, so I didn't have to explain why the other team's point guard was scoring so much.

Rudy Gay was also very impressive.  Some nifty moves to shake defenders, and some nice finishes along the way.

For the Nuggets, Evan Fournier was fantastic.  I love Fournier, and can't believe how good he is at such a young age.  Kenneth Faried was also really active in the game.  I understand that he isn't the type of player Brian Shaw wants, but man I think it would be a mistake for Denver to get rid of him.

After the game, I saw a group of Kings fans chanting "Sa-cra-men-to" and waving a Kings banner, so I wandered over to enjoy their company.  Turned out they were right behind Grant and Jerry.  We ended up on the Sacramento broadcast, which my mom really enjoyed. 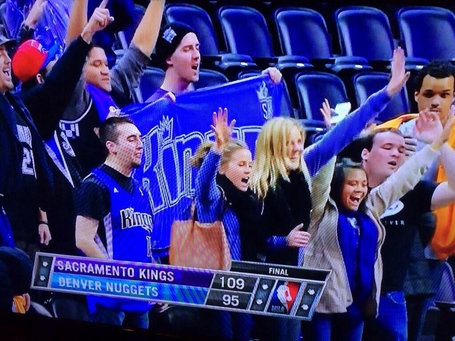 I really enjoyed getting to meet some fellow Kings fans, and was impressed by the turnout.  Grant and Jerry appreciated us as well.  Sorry it's blurry, my phone is incapable of a clear picture, it seems. 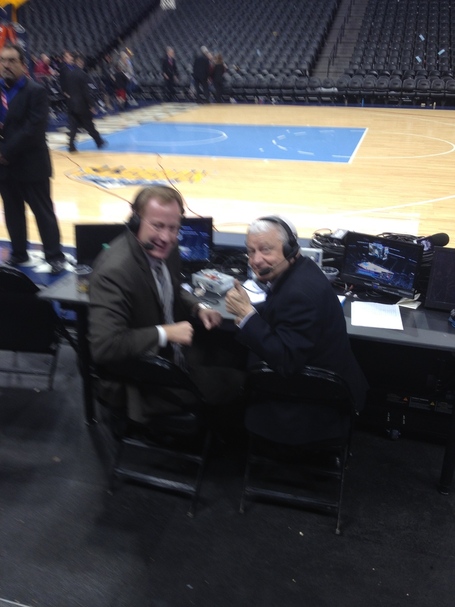 In the end, it was simply a joy to watch the Kings win the game.  This was Sacramento's first win in Denver since 2008 (This previously said 2002, hat tip to BloodyNate for looking into it and correcting me).  I've gone to a lot of those losses.  A win, especially in the midst of yet another lost season, was pretty fun. 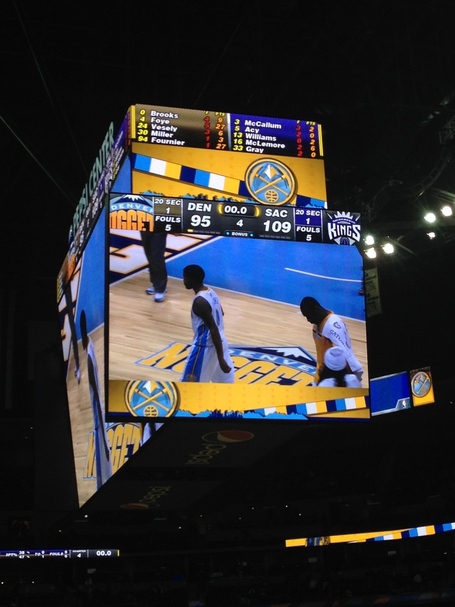