The Kings released arena renderings this week, and they look beautiful. Check out the full gallery of pictures here.

Our first away game was a big success, even though the Kings didn't win. I want to thank HumboldtCPA for hosting us at his parent's bar. The Irish Tacos definitely lived up to the hype. It was nice seeing old friends, meeting new ones and confirming that Robby Biegler is in fact a real human being. We'll definitely be having more of these type of nights in the future.

4. Ray McCallum gets a meaningful stint

With Jimmer out against San Antonio due to illness, Ray McCallum got some meaningful playing time for once and I think he did a decent job, particularly defensively. I'll be interested to see if Coach Malone gives him more of a look this week.

5. Jason Thompson continues to be a workhorse

Ever since that player-only meeting a month or so ago, Jason Thompson has turned his season around after a disappointing start. This week he had his best game of the year against Utah, with 19 points, 11 rebounds and 2 blocks. He's hustling on both ends of the floor and it was noticeable (especially against Dallas) that the team was much better with him on the floor at some points.

1. Boogie misses out on All-Star team

It was unfortunate to hear that DeMarcus Cousins was not selected to his first All-Star team with the year he'd been having, but it's also understandable given the Kings' record and the fact that the West is so deep. If Cousins continues to play the way he has this year and improve on that, there's no way he won't be a multiple-time All-Star in the future. The fact that he's legitimately worthy of that status this year is good enough for me.

2. No McLemore in Rookie Challenge

I'm less upset about this than Boogie's snub, but it's still worth mentioning. Ben definitely has proven to be more of a project than some of us thought he'd be. This week, he had two very good games against Denver and Utah before falling back down to earth the next few games. There have been improvements already though: he's been more selective with his shots lately, more aggressive attacking the basket, and also utilizing the mid-range when it's available. I also think Ben's got decent court vision but doesn't yet possess the handle to utilize it.

One thing that couldn't be said of Isaiah for most of his first three years is that he was inefficient. Without Cousins and Gay however, that has changed as Thomas has tried to take over the team and hasn't been shooting nearly as well. His 3P%, almost in the mid-40s before those injuries, has now dipped almost 7 percentage points to 37.4%. His usage rates in the 7 Kings losses: 26.7%, 37.7%, 32.3%, 23.5% (the Utah game where he played sick and left early), 29.1%, 27.6%, 35.7%. In those games he shot above 42% just once and below 40% four times. He also had more than 6 assists in just one game. Hopefully with Cousins and Gay both back this week, Thomas will settle back down and get back some of his efficiency.

What had seemed a promising sign when Thornton went off two games in a row last week disappeared almost as suddenly when Rudy Gay came back. Thornton doesn't seem to know how to involve himself in the offense unless he's a featured part of it. Against Memphis, he shot the ball just twice, or half the amount of times that Aaron Gray shot it. That's not a trend I like seeing. The fact that Thornton needs the ball in his hands a lot on offense to be effective doesn't help out a Kings team that has so many offensive weapons already; I'll be surprised if Thornton is still a Sacramento King past the deadline as someone who lacks offensive weapons could use him.

At times, Derrick looks amazing, while at others he's completely lost. He had games this week where he scored 17 points with 15 rebounds, only to follow it up with 8 points and 1 rebound. He's definitely got a lot of talent, but also a ways to go before he becomes a really solid rotation player. He definitely needs to work on his spot-up shooting, because right now the only real go-to move he has is to attack the basket (where he's phenomenal at drawing fouls).

We knew it was going to happen but it doesn't make it any less crappy. The case will be heard by a judge this month, and we'll likely have a final answer within 30 days since the deadline to get on the June Ballot is in early March.

2. Execution down the stretch

In two games this week, (Dallas and San Antonio) the Kings frittered away a 4th quarter lead thanks to terrible offensive execution and some bad defense to boot. These problems have existed all season, with Cousins and without. As a fan, it's frustrating to see this team lose so many close games but it is a learning process. The Kings have the least playoff experience of any team in the league (only Gay, Outlaw, Landry and Gray) but in order to get to the playoffs and earn that experience, they have to figure out how to win close games.

Sacramento now officially has the worst defense in the league with a defensive rating of 109.8. Amazingly, that's somehow better than last year's 111.4 which was 29th. The Kings allow the 2nd best FG%, 4th best 3P%, 3rd most FTA, and are 1st in the league in fouls committed.

How amazing has this guy been? We go from having some of the worst Small Forwards in the league to one of the best. Rudy has been doing it all, from scoring efficiently (now at 53.1% as a King and 46.2% for the year which includes his crappy Toronto stats), rebounding, passing and stealing. If Rudy were to opt out this summer and sign a long term extension from the Kings (the only scenario where I see him opting out is if it's agreed beforehand with Sacramento that he's getting an extension) I wouldn't be mad. This is a guy, if he continues to play this way, that I want around for a long time. 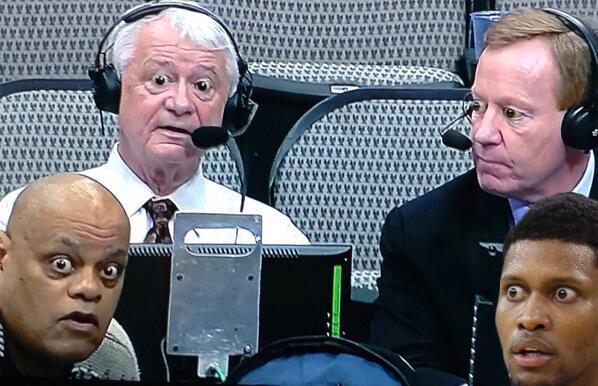 This is how Rudy Gay felt when he Dunked on his former team... (Congrats to Seattle on their 1st Super Bowl win by the way. Just demolished the Broncos)

"all star worthy" and "moral victories"

The calling cards of YOUR Sacramentoooooo Kings!

The Rising Stars game is nothing but 3s and dunks

I have no idea how McLemore isn’t considered a prime candidate for the game. It’s like it was designed just for him.

Last Week's Winner: kfipp (even though he doesn't know it's Pierre, not Hugo)

Rudy Gay spots Hugo the Pelican from an elevated position and is overcome with fear. Gay's achilles was injured on the play. Team doctors surmised the tendon was actually trying to flee from Gay's body out of fear for it's own personal safety.

This is the 14th "Hugo the Pelican" related injury this year. 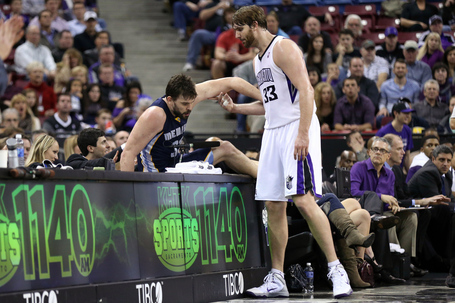 2/3 vs. Bulls L (I just don't even know anymore. This seems like the type of team that would eat Sacramento alive, and yet last year we beat them by 40 or something. So yeah)

2/5 vs. Raptors W (Just like with the Bulls I don't even know. I know Rudy will be amped because of all the hate he got from his time with Toronto. This is Forever Silver night by the way, we still need donations!)

2/7 @ Celtics W (This is the start of a pretty favorable four-game road trip. The Celtics are a prime target for Boogie devastation with no real interior presence)

2/9 @ Wizards L (The Wizards are the toughest team the Kings play on this trip. They're fighting for playoff positioning and they actually have some depth. I expect this to be a close loss)

Nostradumbass Record for the Year: 21-27