The week started well, but it quickly soured with bad losses against Toronto and Brooklyn as well as the loss of Carl Landry for the season.

The Kings signed Royce White to a 10-day contract and immediately sent him to the D-League for a test run. To me, this was the perfect way to handle the signing. White definitely has talent, but he needs to prove he's ready to play basketball at a high level before he gets a shot at the big league, and the D-League is perfect for that. In fact, under better circumstances, I think Ben McLemore would have spent some time down there himself. Who knows if White will make the team or if he does well, but on a team like the Kings, these are low-risk moves to try to acquire talent.

3. Beating the other bad teams

The Kings are better than their record indicates, so it's nice to see them actually play like it against teams like the Pelicans and Bucks. Neither game was ever in any real doubt as the Kings big three of Cousins, Gay and Thomas was able to get whatever they wanted.

Ray McCallum has been fun to watch lately. He's aggressive, confident and even when his shot's not falling, he tries his hardest, especially on the defensive end. The one thing that I would like to see Ray improve on is setting up his teammates, because right now he's more of a scoring guard.

Reggie Evans has been a breath of fresh air since being traded to the Kings. He's quickly becoming a fan favorite thanks to his hustle and the energy he brings to the team on the court. He's got a real nose for the ball, and he's even shown a surprising touch around the basket. Evans isn't a long term fit for this team, but I'm glad to have him as long as he's here.

1. Effort against Toronto and Brooklyn

When any one of Sacramento's big three is off their game like Isaiah Thomas was in both of these and Rudy Gay was against Toronto, Sacramento's offense falls apart. The Kings lack guys that can really step up aside from those three. Double that with a lack of effort, particularly on the defensive end, and you have a disaster on your hands.

Derrick Williams has gone from a promising role player to almost an afterthought. Williams hasn't been playing much, and when he has, he looks lost on both ends of the floor. The Rudy trade kind of killed a lot of his playing time, but he needs to figure out a way to contribute in the minutes he does get.

Sacramento's three point shooting has fallen off a cliff lately, especially since they traded away most of their shooters and their existing ones have stopped hitting their own. This week the Kings went just 15-63 from three (.237), and in the last two games, Isaiah went just 2 for 15.

Top Hat's season has been a disaster from the get-go, what with him sustaining a hip flexor injury in training camp that knocked him out most of the first half of the season. Then when he did come back, he didn't look like himself and now we know that he's torn the meniscus in his right knee. Carl will be able to come back next season, but who knows if he will ever get back to playing like himself after a lost season. We can only hope for the best and wish him a full and speedy recovery.

Sacramento's turnover problems have grown, culminating in an 11 assist to 25 turnover effort against Brooklyn. As we explored yesterday, this is a trend that has gotten worse month after month.

After blowing up last week and getting himself suspended, Cousins came back a bit calmer and it resulted in better play. Even in the games in which Sacramento lost, Cousins was still a force to be reckoned with. There's absolutely no reason why Cousins can't play like this all the time, and there have even been stretches throughout the season where he's done it. He needs to make the time between bad stretches and emotional outbursts longer and longer until eventually they disappear. Will that ever happen? There's only one person who knows, and it's Cousins himself.

I think Reggie's smile is infecting the other teammates.

Reke with another solid game against the Kings Tank as a team, Pick up each other as a team

In regards to Carl's season-ending injury

There go our playoff hopes.

In regards to why ESPN's box score of the Kings-Bucks game was wrong:

DeMarcus Cousins is your favorite player by Jim Les

Jordan Farmar was unhappy to learn the capital of Thailand. 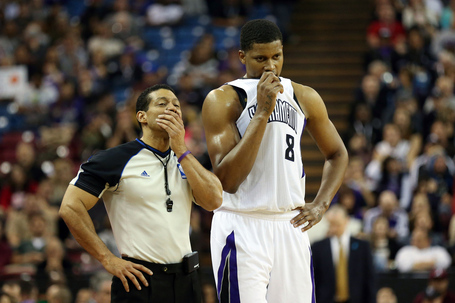 3/11 @ Detroit L (The Pistons have been struggling lately but I feel they match up well against the Kings with their size and athleticism. The way the Kings have been playing lately I don't see this going our way)

3/12 @ Philadelphia W (The Sixers on the other hand are a complete mess, entirely by design. They've lost 16 straight and it wouldn't be all that surprising if they didn't win a single game the rest of the way. This is a team that lost to the Bucks by 20. If the Kings don't win this game, it will be depressing)

3/15 @ Chicago L (The Bulls are playing great lately, led by Joakim Noah. He'll want some revenge after getting whooped by Cousins last month, a game in which he got ejected)

3/16 @ Minnesota L (Minnesota's playoff hopes are slim, but they get much slimmer if they don't beat teams like the Kings so I expect them to come out strong)

Nostradumbass Record for the Year: 31-32