How Has DeMarcus Cousins Improved?

DeMarcus Cousins' improvement has been obvious, but where specifically has he improved?

Share All sharing options for: How Has DeMarcus Cousins Improved?

DeMarcus Cousins has improved this season. This article will operate under this premise. I think it's a premise that most everyone can agree with, even if you don't particularly like Cousins. He has flaws still, and still has a lot of room for improvement. Some believe he's worth building the Kings around, some disagree. Some disagree strongly. But I think, I hope, that for the sake of this article we can at least agree that he's played a little bit better this season.

I would argue that he's improved on defense, but that his effort on defense is still very inconsistent and seems to have declined as the season went on. You may disagree, I'm not going to refute that. This is simply observational. I don't have stats to back this up, perhaps another time.

What I see as Cousins' biggest area of improvement has been his offense. Cousins seems to be shooting better, scoring more. So it came as quite a shock to me the other day when I looked at his shot charts on NBA.com/stats.  I went ahead and put them side by side for easy comparison (click to embiggen): 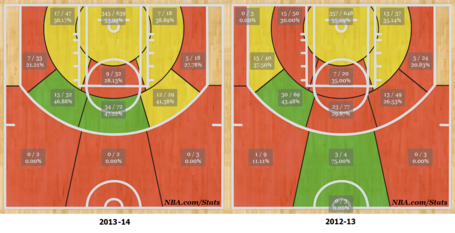 What I found surprising is that Cousins' shot selection doesn't seem to have changed much at all. And his efficiency hasn't changed dramatically either. The biggest differences are the left block (a welcome sign!), and from the top of the key.  But those two areas make up such a small percentage of his overall attempts that I decided to dig a little deeper. If it isn't shot location, what it is?

I turned to Synergy Sports. The next screen shot show part of the data available for Cousins. I was interested in his differences year over year (again, click to embiggen): 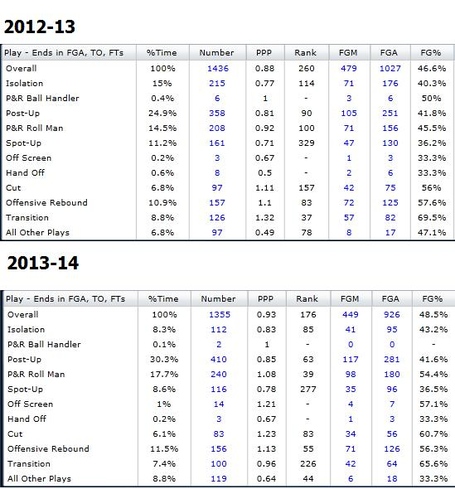 Here the differences become clear. Cousins has increased the types of plays where he's best at scoring, and has become more efficient at those plays.  Cousins was the 90th ranked post-up player last season, scoring 0.81 Points Per Possession (PPP), and he attempted post-ups 24.9% of his plays last season. This year he's posting up over 30% of the time, and is scoring 0.85 PPP, placing him 63rd in the league. Keep in mind, those rankings are of all NBA players, not just big men.

Similarly, Cousins was solid as the roll man in pick and roll plays last season. He scored 0.92 PPP on those plays, 100th in the league, and was the roll man in 14.5% of his scoring opportunities. This season he's operating as the roll man 17.7% of the time, scoring an absurd 1.08 PPP, good for 39th overall.

And where Cousins isn't as effective? Too often last season we watched Cousins spot up.  11.2% of the time, to be specific. More than once every ten plays. He scored just 0.71 PPP in those situations, ranking him 329th in the NBA. That's awful. This season he's still spotting up more than I would prefer, but he's down to 8.6% of his plays, and seems to be picking his spots a little better, converting for 0.78 PPP. It's still not good, but he's now ranked 277th. Again, not good, but moving in the right direction.

The trend continues. He's operating less out of isolation. And when he is he's scoring at a better rate. The one area that seems to be trending in the wrong direction is his transition scoring. I haven't watched the video to back this up, but I'd venture a guess that this is largely due to Cousins' inexplicable insistence on running the point on fast breaks.

Overall, why has Cousins' offense improved? He's operating more often in plays where he's more efficient. And he's increased his efficiency across the board in the plays where he's most often used. It's a credit to both DeMarcus and to Michael Malone.

Cousins isn't a finished product. But he's improving. And now we know exactly how he's improved.