The Kings lost three of four to end the road trip, but they had a chance to win each game which is all we can ask for at this point of the season.

Is Ben finally figuring it out? I wouldn't go as far as saying that, but his March has been better.  He's averaging 8.6 points on 46% from the field over 9 games so far this month.  One poor shooting game dropped his three point percentage from 41% for March to 28.6% but other than that, there's been some progress.

The Kings lost three of four last week, but lack of effort was definitely not the reason.  For whatever faults this team has, Michael Malone has been able to keep them seemingly engaged most of the season, and I can't remember a season in a while where the Kings have managed to keep this many games close.  Sacramento hasn't gotten blown out much at all this year:  Only 8 losses this year have been by 15 points or more, compared to 18 last year.  Defensively they've been doing better as well, now at 108.7 Defensive Rating for the year, 24th in the league.  That's not good, but that's also the best Defensive Rating this team has had since the 2006-07 season (when it was 108.0).  The point differential of -2.4 this year is the best since 2007-08 when it was -2.3 (that team finished 38-44).  For reference, the six seasons of point differential between this season and 2007-08: -4.9, -5.7, -5.3, -4.4, and -8.8.  So despite the Kings' record staying pretty much the same, this is a better team than last year.

Derrick Williams came to play against his former team in Minnesota, scoring 26 points to go with 11 rebounds.  Williams is at his best when he's allowed to attack and when he's aggressive.  I don't like it when Williams settles for jumpers because he's so good at getting to the rim and drawing contact.  That should be his bread and butter until his jumper comes around to the point where it can be considered a legitimate threat.

Is it just me, or has anyone else been completely shocked that Reggie Evans is actually kind of capable of scoring the ball?  He's got surprisingly good touch around the basket, and that's not something I was ever expecting when we got him.  All I'd ever heard about him was that he was an offensive zero that could get boards and bring energy.  In Sacramento though, he's also been able to contribute offensively.

DeMarcus was a healthy scratch against the Timberwolves, in a game the Kings could have easily won.  Michael Malone said it was to give Cousins a break and allow other guys a chance to play.  Do we really need to give Aaron Gray a chance to play (he started and played 19 minutes). That's probably the only blatant form of tanking I've seen from the Kings this year.  Sacramento is now 0-10 without Cousins, and that doesn't count the Rockets game he missed where he was injured early.

Rudy did not have a great week shooting the ball, making just 40% of his shots and 12.5% of his threes.  He was able to get to the line a bunch, which is good.  However, too often does Rudy settle for a long contested jumper instead of moving the ball and trying to get open for a better look.  My hope is that if Rudy stays (which I hope he does) that a full training camp next year will allow the Kings to maximize the talent they do have, because they've managed to be pretty good this year when Rudy/Isaiah/DeMarcus have all been on; It's just been working everyone else into it that's been missing, especially when someone has an off night.

This doesn't appear to be a problem that's going away anytime soon.  The Kings had at least 16 turnovers in every game this week, topped by 21 to the Sixers.  They also only had 12 assists in a game against the Bulls.

Jason Thompson's frustrating career took another turn this week as he lost his starting role to Reggie Evans this week.  He vented to the media a little bit afterwards, but as we discussed earlier this week, he has a right to be frustrated.  Also, while I like Evans, I'm not sure why he's getting the starting role when he's not really a part of this team's future. I'd rather see Williams or Acy get the role, although I can understand wanting to bring Williams off the bench so he can be more of a focal point with the bench unit.

I still can't get over how many people think Isaiah Thomas can't be a starting Point Guard in this league.  Night after night he brings constant energy and an aggressive mentality.  That's why I scoff at reports from anonymous GMs that they wouldn't give Thomas more than $4.5 million a year or a mid-level contract.  Is there anyone out there that thinks Thomas is a worse player than say, Brandon Jennings?  Jennings got 3 years, $24 million.  If the Kings can manage to re-sign Isaiah for less than that, that will be one of the better extensions they've signed in recent memory.

I'm a Kings fan for life

And I think I gotta long way to go. So…

Malone reading the stat sheet for Sacramento's "only three" after the game.

After the Bulls game in which Jimmer got a DNP-CD

Why does that always happen when we play against ex-players?

Looking Towards the Future: Noah Vonleh by 10KingsFan10

Ref: it's not just you, it's your whole team

Ref: What is Aaron Gray doing over there?Gay: That's his Sharon Stone impression from Basic Instinct.Ref: ...Gay:...Ref:...Gay:...Ref: That makes Quincy Acy's beard look like stubble.Gay: Like two raccoons fighting over a discarded fruit roll.Ref: I am repulsed, yet I cannot look away.Gay: It's hypnotic.Ref: I think it just winked at me.Gay: He did this in Toronto, too. He called it "The Bearded Mountie."Ref: (Shudder)Gay: (Shudder) 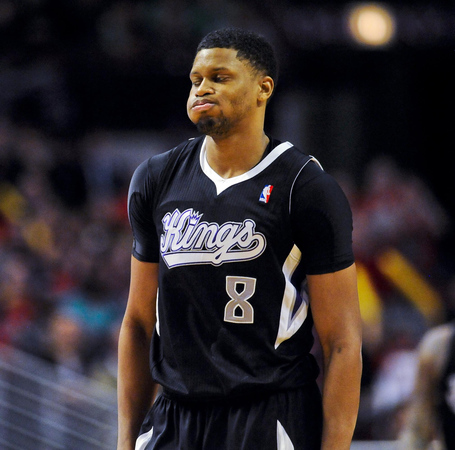 3/18 vs. Washington W (It's the first game back after a long road trip, which typically isn't good, but the Kings have given good effort lately, so hopefully they can take advantage of the home crowd's energy and win one)

3/21 vs. San Antonio L (The Spurs are finally getting healthy again, and they've been beating teams up left and right since Kawhi Leonard came back.  They've already reached 50 wins on the year and have won 10 in a row as of this article)

Nostradumbass Record for the Year: 35-32