The Kings have been playing some good basketball lately, and aside from a hiccup against the Spurs, had a good week.

The Kings were trailing the Washington Wizards by double digits in the 4th quarter early last week, and both DeMarcus Cousins and Rudy Gay had been struggling. Then DeMarcus and Rudy came alive, carrying the Kings back into the game. Rudy hit some incredible shots, including the game-tying floater to send the game into overtime. Once it got into OT, it was the Rudy Gay show, as he hit jumper after jumper. The Kings are now 4-2 in overtime games this season, and I think it's partially because now that the Kings have Gay, there are finally multiple legitimate go-to options at the end of games with Thomas, Cousins and Gay, rather than the infamous 1-4 flat we'd been running the last 4 years. Rudy's been a phenomenal addition to this team, and I hope that he'll end up staying.

We all know Thomas can score, but this week he stepped up his passing game as well. His low numbers from the Spurs game hurt, but against the Wizards and the Bucks, Thomas totalled 18 assists to just 5 turnovers. One trend I really liked seeing (and I know HighTops did too) was Thomas getting the ball to his big men near the basket. Great point guards don't just get assists, they set up their teammates for easy shots.

We've been calling the trio of DeMarcus/Rudy/Isaiah "the Only Three" but Jerry Reynolds' "Three Basketeers" is much catchier.

As Greg pointed out yesterday, the Kings defense still isn't great, but it's been better this season, and much better as of late. The last 10-game stretch was the best 10-game defensive stretch the Kings have had all season. That bodes well for what Malone can do if given enough time. There's been so much roster turnover this season, it's a shock they've been playing as competitively as they have been.

In three games this week, the Kings had two players score in double digits: Travis Outlaw against the Spurs (13 points) and Jason Thompson against the Wizards (10 points). No other King scored more than 7. The dropoff in quality between Sacramento's starters and the bench has been drastic. Against the Bucks, a 40 point lead dwindled to just 15 at one point because the bench could not get anything going. I'd especially like to see Derrick Williams assert himself more when he comes in with the bench.

I've mentioned this a lot lately, but the Kings really don't have many legitimate three point threats. Isaiah's our best, but he's been hampered by a wrist injury. Ben McLemore is getting better but is inconsistent. Travis Outlaw is Travis Outlaw. While the Kings defense is a more pressing concern, I'd definitely like to see the Kings add some shooting this summer as well to help space the floor.

1. Sacramento's offense against the Spurs

The Kings could not buy a basket against the Spurs, shooting 40%, turning it over 15 times and scoring a season-low 79 points. It's too bad too, because they did a decent job defensively against San Antonio.

I'll admit, I didn't have the highest expectations for Royce White when we signed him to a 10-day contract. Yet the whole point of these 10-day contracts is usually to try these guys out in game situations to see if they're worth signing for a longer period of time. That being said, it's extremely peculiar that in a game the Kings led by as much as 40 points that White didn't get off the bench until there was less than a minute left. That seems like the perfect situation to give a guy like White some run, especially with the rest of our bench severely underperforming.

Cousins came up big for us this week, coming back from a slow start against the Wizards to score 19 points in the 4th quarter and overtime. Against the Spurs he couldn't get his shot to fall, but neither could anyone on the Kings. He contributed in other areas though, blocking shots, passing, rebounding and playing stout defense of his own. Against Milwaukee, he looked like a superstar, partly because it was the Bucks, but even against the Bucks there aren't too many big men that could have performed like he did. Then there's the nice gesture off the court where he went up to Sean Elliott on Friday and apologized for his actions last year. By all accounts it was Cousins idea and nobody else's, and that's a step in the right direction. On Royce White's lack of any positive or negative stat during his brief first NBA appearance.

I think we're all overlooking how good his defense was...

While White was on the floor… NO ONE SCORED.

In regards to the city winning the eminent domain case:

Just another example of big government trying to keep the helpless banks down.

On Cousins' dislike of Chris Paul:

I don’t think Cousins would follow Paul out of a burning building.

3 Best Case Scenarios for the Future after This Year's Draft by Mr. Hashtag

Rudy Gay finds the stash of Twinkies that he inherited when he was given Chuck Hayes' locker. 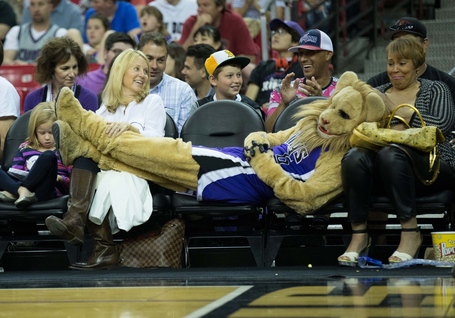 3/26 v. New York W (The Knicks have been playing a lot better lately, but so have the Kings. This is their last home game before going back on the road, and I think they'll be trying really hard to finish this homestand 3-1)

3/28 @ Oklahoma City L (The Thunder as simply better than us, and Durant is on another level right now.)

3/29 @ Dallas L (The Mavericks match up well with the Kings, and being the second game of a back to back, it will be tough to beat the Mavs on their home floor.)