The Kings had a rough time with Isaiah Thomas' injury, but there were still some good signs, particularly from the young players.

So when news broke that the Kings were signing Willie Reed to a contract, I was a little surprised because the last thing the Kings need is yet another big man.  After all, the Kings do only have three guards on the active roster right now and one of them (Thomas) is injured.  The Kings have been forced to play Travis Outlaw and Rudy Gay at Shooting Guard.  But it turns out the Kings weren't signing Reed to help this team, but to help the Bighorns.  The Bighorns were fighting for the 8th seed in the D-League playoffs, and were in need of another big man.  Acquiring Reed's rights from the Armor and moving him to the Bighorns has allowed them to secure their playoff spot and potentially play even longer.  It goes to show that the Kings are intent on developing a two-way relationship with Reno, where they don't just help the Kings, but the Kings also help Reno.

3. Ray McCallum does as best he can

The raw numbers don't look particularly kind for Ray this week after being given heavy minutes in Isaiah's absence, but I think he did as well as can be expected, and more importantly improved as the week went on.  He started really slow against the Knicks, but finished it up with an excellent performance against Dallas in which he was heavily responsible for Sacramento's near comeback.  McCallum still has a lot of work to do, but there's definitely potential here.

Perhaps the best part of Ben's March is that he's been able to have some sustained success.  His only poor shooting performance this week was against the Thunder, but he still led the Kings in scoring with 18 points.  He also was excellent from three point range all week, hitting 8 of 16 of his threes.  One big change I've noticed recently is that the Kings seem to be making a conscious effort of giving Ben the ball in the corner for three.  When I wrote the post about diagnosing his shot selection, I noted that he's already very good from there, so it's good to see that the Kings have been playing to his strength.

Travis Outlaw was phenomenal this week.  Yes, Travis Outlaw.  Travis led Sacramento's bench in scoring in all but one game, and shot nearly 50% from the field this week.  He's been forced to play out of position at two-guard as well.  Travis has gotten a lot of flak since coming here, and I'll admit I've been hard on him too.  But you can't ever call Travis a quitter, and he's been having his best year as a King.

J.R. Smith hit a Knicks franchise record for threes in a game with 9.  I almost feel as if the Kings have an NBA record for giving up NBA records from three point range.  We've seen Chalmers hit 10 threes, we've seen the Magic hit more than 20, we've seen the Lakers hit almost 90% of their attempts and those are only the ones I can remember off the top of my head.

Derrick has been pretty disappointing lately.  We have needed someone from our bench to step up, and Williams should be that guy.  Instead it's been guys like Outlaw or Jason Thompson.  Williams almost seems too unselfish at times, when I think his strengths lie in being aggressive.

The Kings turned to Rudy Gay to play some backup Point Guard this week, and it didn't really work that well.  In three games, Rudy had just 4 assists to a whopping 15 turnovers.  That's a terrible rate.  Rudy has good vision, but he also tends to wait too long to make a pass until he's in trouble, and he also has a really high dribble that gets him into trouble when he gets into traffic.  To me, Rudy's at his worst when he's dominating the ball.  I'd rather see him make a quick, aggressive move.  Having additional ballhandlers would help that.

1. The Kings without Isaiah Thomas

Re-signing Isaiah may have become more of a priority this week after he missed each game with a bruised thigh.  In Thomas' offense, the reins were handed over to rookie Ray McCallum, who was forced to play heavy minutes as the only guard that could reliably handle the ball available.  Sacramento trailed by double digits in each game, and only managed to come back in two games thanks to late second half flurries.

The Kings could not keep up with the Oklahoma City Thunder at all.  The only reason the Kings lost by just 13 was because the Thunder were able to play out their string for the entire 4th quarter.  DeMarcus Cousins barely played, and didn't make much of an impact in the time he did, Rudy couldn't hit a shot, and the Thunder blew it open in the first quarter.

Discounting a poor performance against the Oklahoma City Thunder (and the whole team was awful against the Thunder), DeMarcus did everything he could to try to carry an extra load in Isaiah Thomas' absence.  Against the Knicks he was incredible, posting a near triple-double and nearly leading the Kings to a 24 point comeback.  Perhaps most impressive about Cousins' performance this week was his passing, although I can live without him trying to play Point Guard on fastbreaks.  For the season, Cousins now has an assist rate of 17.9%, a phenomenal rate for a big man.  Only Pau Gasol, Blake Griffin, Kevin Love, Josh McRoberts and Joakim Noah have higher rates among big men.

Well, that Thunderstorm ran right over us tonight.

I'm a little out of the loop

Is Orlando Johnson still playing out his second 10-day?

Because I have to be honest here. I’m not sure I can handle two Johnsons at the same time.

(In an excited Australian accented whisper while hiding in the bush):

A sight indeed. We appear to be witnessing a rare thing in the wild…a lion trying to bag a couple of cougars. 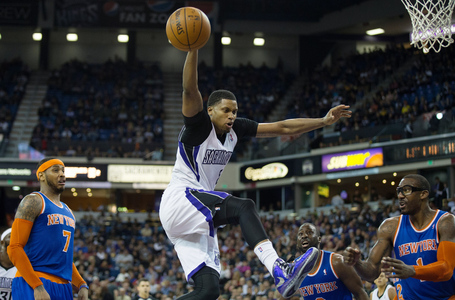 3/31 @ New Orleans L (The Kings have done well against the Pelicans this season, but New Orleans has been playing well lately, and I'm gonna predict that Isaiah probably just rests this road trip)

4/2 vs. L.A. Lakers W (Man, I know this would help the Lakers in lottery positioning for us to beat them, but we have to beat them at least once this season. And it's Bollywood night!)

4/6 vs. Dallas W (The Kings should be at full health here, and given that they gave Dallas a scare without one of their best players, I like our chances at home.)

Nostradumbass Record for the Year: 40-33