The Kings rookie was known for his great shooting at Kansas but that hasn't translated to the NBA.

Share All sharing options for: Diagnosing Ben McLemore's outside shot

Coming out of college, there was one strength Ben McLemore was supposed to have: a deadly outside shot. In his lone year at Kansas, Ben hit 73 of 174 threes in 37 games, or a very respectable 42%. Of all players drafted this past year, Ben hit the 4th most threes, behind just Trey Burke, Kentavious Caldwell-Pope and Reggie Bullock. He hit the most threes of any Freshman in the country, let alone the ones that got drafted.

It hasn't worked out that way in the NBA though. So far this year, Ben is shooting an abysmal 36.0% from the field and 31.6% from three. Almost 43% of Ben's total shots have come from behind the arc, but he hasn't been hitting them with any kind of consistency.

So I wondered, how many players have shot a similar amount of threes at a similar percentage as rookies? Thanks to Basketball-Reference, the tools are there so I searched for all players in their first year that had hit 70 or less threes but shot 192 or more, and came up with 16 names aside from Ben, including 9 that are still active: Carmelo Anthony, LeBron James, Charlie Villanueva, Kevin Durant, Kyle Singler, Jae Crowder, Terrence Ross, Dion Waiters and Kemba Walker.

One good sign for Ben is that out of all 16 names, most of them have gone on to become good shooters, and a couple that haven't (Walker and Crowder) haven't been in the league very long. Terrence Ross and Dion Waiters are good recent examples of players who have seen a big bump to their three point shooting in their sophomore year. 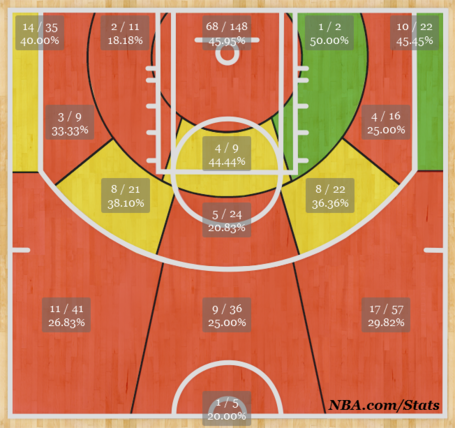 A quick look at Ben's shot chart also tells us that he's already quite good at hitting the short corner three, a shot more in line with the college three pointer that he did so well with. Unfortunately, Ben also shoots the corner three the least of all his three point attempts, and his percentages in the other areas are not good.  One might even say they are bad.

More worrying is how Ben's shot is actually getting worse as the season progresses rather than getting better. In November, he hit 36.4% of his threes, a respectable number, but in the subsequent months that's dropped to 35.1%, 29.3%, 23.5% and finally 25.0%. Shooters typically do better with the more repetition they get, but for Ben it's basically been the opposite. There's also the fact that among all those 16 players listed above that were poor three point shooters on high volume their rookie year, Ben has the lowest overall Field Goal Percentage, just below Kemba Walker's 36.6%. Part of that is because so many of his overall shots are threes themselves, but the shot chart shows he's been pretty bad from most areas on the court, not just from three.

Ben McLemore's rookie season has definitely been a struggle, and in fact, historically bad. Of players who have played at least 1400 minutes, only 7 have had a PER of less than 8 and a True Shooting Percentage of less than .470 in their rookie season: Gene Wiley, Mike Farmer, Ben McLemore, Larry Demic, Junior Harrington, Austin Rivers and Adam Morrison. That's not good company to be with.

It's far too early to close the book on Ben McLemore or to label him as a bust. He's been thrust into the spotlight much earlier than anticipated thanks to a huge amount of roster turnover and new management. But the early returns aren't kind. If there's anything good to take from these numbers is that the only way to go is up. For Ben's sake and the Kings, I hope he can figure it out.