Report: Marcin Gortat to sign with Sacramento Kings this summer

The Washington Wizards center, who will be an unrestricted Free Agent this summer, may have already decided his next destination.

After a long multi-year investigation, Sactown Royalty has learned that Washington Wizards center Marcin Gortat is primed to join the Sacramento Kings this summer.

Gortat is in the last year of a five year, $34 million deal, and will probably command a decent salary considering his defensive acumen and the fact that he has helped Washington to their first playoff berth in years after being traded from the Phoenix Suns prior to this season. While there are likely to be several suitors for Gortat this summer, Sactown Royalty has learned that Gortat is actually a huge fan of the Sacramento Kings and has been for some time. In fact, he's one of our own.

My investigation began back in 2011 during the first Here We Stay movement. Blake Ellington and I founded Here We Stay to help unite Kings fans in the fight to keep the team in Sacramento and to get a new arena in Sacramento. So I was extremely shocked to see Marcin Gortat come to one of our first meetings. Of course, as he was playing for the Suns at the time, he decided to go under the alias of "Kevin Fippin". Not wanting to offend him or scare him away from the movement (having a professional player involved was a big deal), I kept his secret. After the meeting, I pulled Blake aside.

"Dude, how did you get Marcin Gortat involved in Here We Stay?!?"

"What are you talking about? You mean Kevin? Ha, I guess he does kinda look like Gortat."

"Well of course he does. He's Marcin freaking Gortat."

"Ha, alright man", he said as he walked out the door. Blake was unconvinced, but then again, the room was dimly lit and Blake wasn't wearing his glasses.

For a while, I let it go, not questioning anything. Gortat and I became friends even, as we helped organize rallies and events for Here We Stay as we fought relocation attempts, although I often joked with him about his true identity, to which he would almost always give an exasperated sigh.

I was amazed at how much effort he was able to put in while also playing a full season of basketball. Some nights, he'd have a game on the East Coast and then appear at a Kings game an hour or so later. I asked him how he did it once and he (jokingly of course) responded "Man, you got to come up with a different joke". One thing I learned is that like Daniel Day-Lewis, Marcin is always in character. One time, I thought I'd trip him up by speaking some of his native Polish to him.

Damn, he's good. There were still signs of his true self however. For example, there was one time when I spied Gortat in a Costco in line to buy a hot dog. A Polish hot dog. I knew I was still on the right track.

It was not long after that Tom Ziller brought on Gortat as Sactown Royalty's social media editor under his alias. You may know him as kfipp. I contacted Tom to let him know that this probably wasn't a great idea, since as a professional basketball player, Gortat probably wouldn't be able to dedicate the necessary amount of time required for the job. Tom simply replied "lol".

Fortunately, Gortat managed to balance his duties with the NBA and Sactown Royalty better than I could ever have expected. His work ethic is nothing but extraordinary, which is probably what makes him such an effective basketball player. Just like how he has helped the Wizards reach new heights this season, Sactown Royalty's Twitter Followers and Facebook likes have skyrocketed since he came on board. His dedication is such that sometimes he'd even tweet Kings game updates while in the middle of another game that he'd be playing in.

With Gortat entering the last year of his contract, I grew eager to see if Gortat would be willing to sign with the Kings. After all, the Kings are in need of a defensive big. Sources had indicated to me that Gortat had bought season tickets for the Kings this season under his Kevin Fippin alias, and that he was even seen wearing a Kings jersey at a game, to which he posted to his alias' twitter account (Gortat has kept two twitter accounts, one being @kfippin and the other being @MGortat, in order to keep his cover). 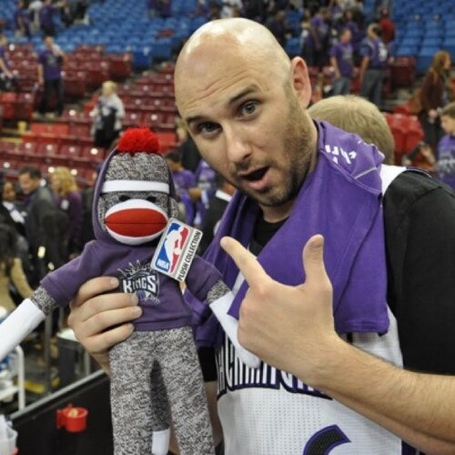 Gortat in a Kings jersey with a sock puppet

At this point, it became clear that Gortat was paving the way for a future as a Sacramento King. I couldn't hold his secret any longer, so I decided to confront him about it and try to get him on the record. To do so, I went to his house, one that he already owned and lived in Sacramento (more proof as if any was needed). I knocked on the door and Gortat answered.

"It's time Marcin. The world needs to know the truth, and I need to tell them. You're going to be on the Sacramento Kings next year right?"

At this point Gortat became confrontational.

"Goddammit Akis. For the last time I'm not Marcin Gortat. Literally the only thing Gortat and I have in common is that we're bald and have kinda similar facial hair. THE GUY IS FREAKING 7 FEET TALL. DO I LOOK 7 FEET TALL!??!?!?!?"

"Man, you need some serious help."

At this point Gortat, obviously infuriated that I would betray his trust and reveal his true identity, gave me a disgusted look before slamming the door in my face. But the truth is out there now.