A revised term sheet for the agreement between the city of Sacramento and the Sacramento Kings was released Monday. Under the new agreement, which is scheduled to be voted on by the city council on May 13, the city is provided with more protections as the team takes on more of the financial burden.

The revised term sheet for the new downtown Sacramento arena was released by the city of Sacramento on Monday, revealing that provisions have been made to the deal that further protect the city from potential financial issues.

The cost of the arena has increased from the $447 million price tag last year when the original non-binding term sheet between the city and the Kings was approved, to $477 million. The extra $30 million will go toward upgrades to the practice facility and the outside plaza area. But the Kings, not the city will pick up the tab for that cost overrun.

Here is language from the term sheet itself.

"The total project cost is currently estimated at $477 million. Consistent with their commitment to cover costs beyond the original project budget, SBH [Sacramento Basketball Holdings] will invest an additional $30 million for these enhancements. SBH also remains responsible for any further cost increases."

In addition, the city's overall contribution to the arena dropped from $258 million to $255 million (the team's contribution got bumped up to $222 million). And there also has been an increase in the amount of money the Kings will be contributing to protect the city's general fund against any losses from the parking fund.

Here is Dale Kasler and Ryan Lillis of The Sacramento Bee.

"The earlier plan left a $9 million a year hole in the city's general fund, reflecting parking profits being shipped to bondholders. The city cobbled together a complicated "backfill" plan to replace that $9 million. The team had agreed to contribute at least $1 million in profits and an estimated $3.7 million in revenue from ticket surcharges, for a total of $4.7 million a year. The rest of the backfill was coming from other sources.

The revised plan is a simpler model. The Kings' contribution has grown and become more ironclad. Instead of $4.7 million, much of which depended on ticket sales, the Kings have now committed to a minimum of $6.5 million in annual lease payments. The payment will jump to $7.5 million in 2021 and will grow by at least 3 percent a year after that, depending on inflation. City officials said the team's payments could grow to $18 million or more eventually."

Here is the breakdown of the lease payments, via the term sheet. 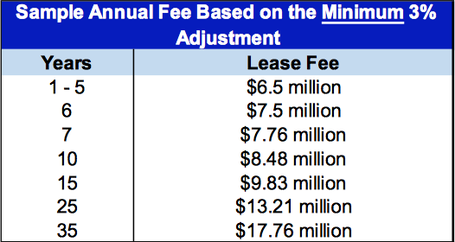 In another change, the value of the eight parcels of land the city intends to contribute to the deal has been appraised at $32 million instead of $38 million as it was originally outlined. But like with the other alterations, this will not increase the amount of money the city contributes to the project, according to News 10's Nick Monacelli.

City officials have been adamant over the last year about the city not contributing above the $258 million that was agreed to last March, and it looks like that remains intact in this term sheet.

The city council will be briefed on the revised term sheet at Tuesday's council meeting and then there will be a final vote on the deal at the May 13 council meeting. If approved, the project will have green lights in every direction.

Kings President Chris Granger also confirmed on Monday that the demolition process of the Downtown Plaza could begin as early as May 14...that's May 14 as in a little over three weeks from now.

Oh, and this is worth repeating from the term sheet simply because it can't be said enough:

"SBH [Sacramento Basketball Holdings] will enter into a lease agreement with the City for a term of 35 years plus two 5-year extension options."