Share All sharing options for: More elements of the new downtown arena highlighted in city report

The city released a new staff report on the new downtown arena Friday that details many of the features of the facility.

The report will be the topic of discussion at the April 10 city Planning and Design Commission meeting. At the meeting, the commission will evaluate the development agreement and establishing a special planning district for the new arena.

Based on the report, it looks like the goal is to have up to five new bar/nightclubs near the new arena. The planning commission will be evaluating a conditional use permit for alcohol sales within the arena's planning district for these facilities.

There will be "food service opportunities" during non-event times located at each of the three entries to the arena. According to the report, there will be a restaurant at the K Street entry.

This sounds like an interesting concept for the eating establishments: "The internal configuration may allow for flexible patron seating within the entry foyers, cordoned from the concourse with removable perimeter treatment, which would allow patrons a view to the interior and event floor without physical access during non-event hours." 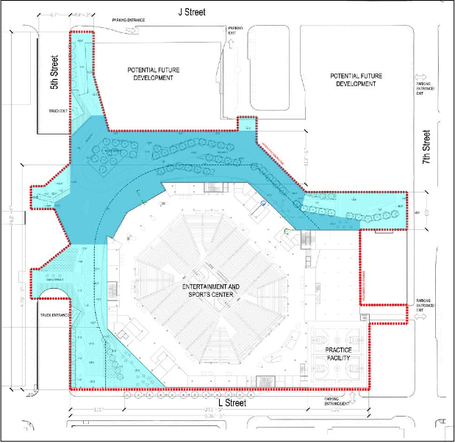 The practice facility, as shown above, will be on the east perimeter of the arena and will have two full-court practice courts and team facilities with two levels of parking below for players and staff. The Team Store will be next to the team facilities and front onto K Street.

There will be a "large free-standing sculpture element" in the main plaza. (Please leave your predictions for what this will be in the thread!)

We already knew about this but it is worth repeating: a "sky-bridge" will span the main entry opening at the suite level and in the upper concourse. "The sky-bridge is intended to be populated with standing patrons as well as serve as circumferential circulation," according to the report. You can see the bridges in the top photo.

There will be 32 suites, six lofts and three lounge concession areas at the suite level.

In the upper concourse, "Views to the cityscape will be possible from the large entry doors as well as selected balcony opportunities made possible by windows in the exterior skin. Internal balcony views to lower levels are also provided." Concession stands will be a mix of island designs with "360 degree serving" and perimeter concessions and service functions on the perimeters of the circulation route.

Demolition will include the east end of the Downtown Plaza from 5th Street, east to 7th Street. Leaving the Marshall Hotel, the Jade Apartments, 24 Hour Fitness, the 660 J Street office building and the Scientology building on 6th Street, according to the report.

To complete the arena by Sept. 2016, the city is recommending working hours to be two, eight-hour construction shifts, six day a week.

To view the full report, click here. The Planning and Design Commission meeting will take place on April 10 at 5:30 p.m. at City Hall. On April 22, city staff will present a revised term sheet between the Kings and the city to the city council. On May 13, the city council will vote on the term sheet and other key documents.