The season is coming to a close and the Kings are looking to close out strong, even as the schedule is incredibly tough and Isaiah remains out.

2. Mitch Richmond in the Hall of Fame!

The Sacramento Kings finally have a representative in Springfield, and it's none other than the Rock.  Richmond deserves to be in the Hall and I only wish that the Kings could have had more success while he was with us.  It's funny that even in parting ways, he helped propel the Kings to the next level by being traded for Chris Webber.

3. Ray McCallum becoming a part of this team's future

Most second round picks don't pan out, so it's always nice to see when they do.  Ray has been making the most of the opportunity he's been given in Isaiah's absence, playing an obscene amount of minutes (he's averaging 45.4 minutes per game as a starter in 7 games).  He's responded with great games like those against New Orleans (22 points, 10 assists) and Los Angeles (27 and 6), and even in games where he didn't score as much he's contributed.  Against the Warriors he couldn't find a bucket, but got 10 assists.  He shot poorly again against Dallas, but still had the near double-double of 8 points and 9 assists.  I also think his huge minute load is a reason for some of those poor shooting performances.  It's nice to see Ray playing well, and I think he's definitely going to see a more consistent role as Sacramento's backup PG next year, either to Isaiah or Isaiah's replacement.

While Rudy has yet to make a really committed statement on his free agency options this summer, it was nice to hear him say good things about Sacramento and seem open to the possibility of re-signing here long-term.  Rudy's been great for the Kings, and he'll obviously be the top priority for the Kings this summer.

The Kings had an interesting twist to each of their home games recently, and I thought they were all good.  The first was having former King Brian Grant come to the Pelicans game.  Then we had Bollywood night against the Lakers, and seeing all the multi-colored shirts and the Indian theme going was really fun (beating the Lakers was even better).  Finally we saw Peja at the Mavericks game.  It's cool how the new ownership is doing a good job of connecting the future with the past, and I look forward to seeing what they have planned when the Kings are actually good again.

Despite the progress of Ray McCallum, it's clear this team misses Isaiah Thomas, and probably would've won a couple more games had he been available.  That being said, at this point in the season it's probably best to just shut down Thomas for the rest of the season.  That carries the unfortunate note that we might have seen the last of Isaiah in a Kings uniform, although I'm hopeful that the Kings will re-sign him.

The Kings don't have any real three point threats.  In fact, the best one they have seems to be Travis Outlaw right now.  The most threes the Kings hit this week was five, and they never hit more than 33% of their attempts.  This is an area I'd like to see rectified this summer, although hopefully a healthy Isaiah (who was hitting well above 40% prior to his wrist injury) and a more developed Ben McLemore will help there.  Still, someone like Jodie Meeks would be an excellent Free Agent target in my opinion.

The Kings have done a very bad job of grabbing boards on the defensive end, with three of the four teams they faced this week grabbing more than 26% of available offensive rebounds.  Against Dallas especially, this led to a lot of second chance opportunities. Playing great defense for a possession doesn't matter if you can't secure the defensive rebound to end the possession.  All that hard work goes to waste.

This is the-game-that-shall-not-be-spoken-of.  The Kings definitely acted like they weren't supposed to play that night.  The 69 points the Kings scored was a franchise-worst against the Warriors, and the 11th lowest scoring game in Sacramento Kings history (the team lost 101 to 59 in 1991 for the worst performance).

It's easy to see why Minnesota fans soured on Williams.  The guy has a tendency to disappear when he's not made a focal point of a team's offense, and he also doesn't seem to have the mentality to make himself part of the offense.  Too often he also settles for outside jumpers, despite his strength lying in attacking the basket and getting to the line.  I'm very disappointed that Williams hasn't adapted better to his bench role, because right now our best bench player is Travis Outlaw and that shouldn't be the case.

The big fella has done a good job of closing out his best season strong.  More importantly he's showing up to play every night.  Even in the game against the Warriors, he was the only King who can claim that he had a decent game, although his early foul trouble was problematic. Those statistics he put up there over 4 games were in just 30.8 MPG.  The next big step in his growth will be staying on the court longer.  On another note, it felt like Cousins has been automatic with his mid-range jumper lately so I went back and took a look at his shooting chart over the last four games.  He's hit 16 of 26 (61.5%) of his shots outside of the paint in the last 4 games. That's obviously a small sample size that will skew lower over time but if he ever gets to the point where he's David West-ian with that mid-range jumper, there won't be many ways you can guard him.

So the homepage is telling an incredibly accurate story in picture form...

I thought Steve Nash was inactive

In regards to Ray McCallum averaging 17.6 shots in his first five starts:

Rudyson, if do crane kick correctly, no can defend.

Rudy Gay tries to act out Jerry Reynold's Hippity hop to the barber shop but gets mixed up with which foot goes hippity and which one goes hop.

This Week's Picture (Final one of the year!): 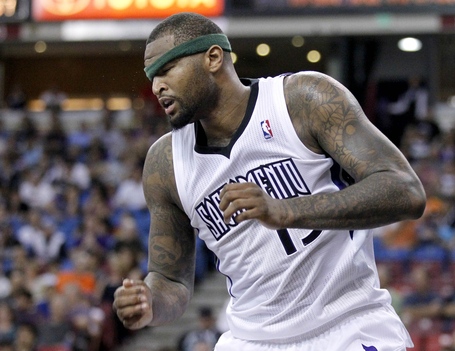 4/8 v. Oklahoma City L (Isaiah's the OKC killer and we don't have Isaiah. Also OKC is just way better than us)

4/12 @ L.A. Clippers L (We've actually played the Clippers pretty well this season, with a couple coming right down to the wire.  However, I feel the Clippers are better than they were at the beginning of the season, and we're not at full strength)

4/13 v. Minnesota W (Bit of a homer pick here but the Wolves won't have anything to play for at this point and while the Kings don't either, I think they'll be a little more motivated to end a five game losing streak)

Nostradumbass Record for the Year: 42-35