Last year's lottery pick had a disappointing season, but there's still cause for hope.

Share All sharing options for: 2013-14 Season in Review: Ben McLemore

Needs to work on:

Back in the 2013 draft, Ben McLemore improbably fell into the Kings laps at #7 after months of speculation that he'd be gone in the top 5.  It was a victory for an organization and fanbase that wanted a super athletic deadeye shooter.

But expectations soon gave way to reality, and the reality was that the success McLemore had at the college level was not yet ready to translate to the NBA.  His shooting, excellent at Kansas, dipped dramatically in the NBA.  He looked relatively lost on the court even in summer league, showcasing an inability to dribble, create his own shot or defend.

It didn't help matters that the Kings couldn't afford to bring him along slowly.  Thanks to Marcus Thornton seemingly forgetting how to shoot and/or do anything useful, the Kings ended up playing McLemore a bunch, rightfully thinking that it'd be better to give him time if Thornton wasn't going to perform.  In an ideal world, Thornton would have been serviceable enough that the Kings could have played McLemore off the bench, and even possibly sent him for a few stints in Reno, which seemed to work well for Ray McCallum, the other Kings rookie who came on strong to end the season.

McLemore had a similar resurgence towards the end of the season.  In March, he shot 42.7% from the field in 16 games and averaged 10.6 points.  That's not a great FG% but it's a lot better than the abysmal 30.1% he shot in February.  He shot 39.1% in the final eight games, scoring at least 14 points in the final five games, and capped it off with a career-high 31 points in the season finale against Phoenix. 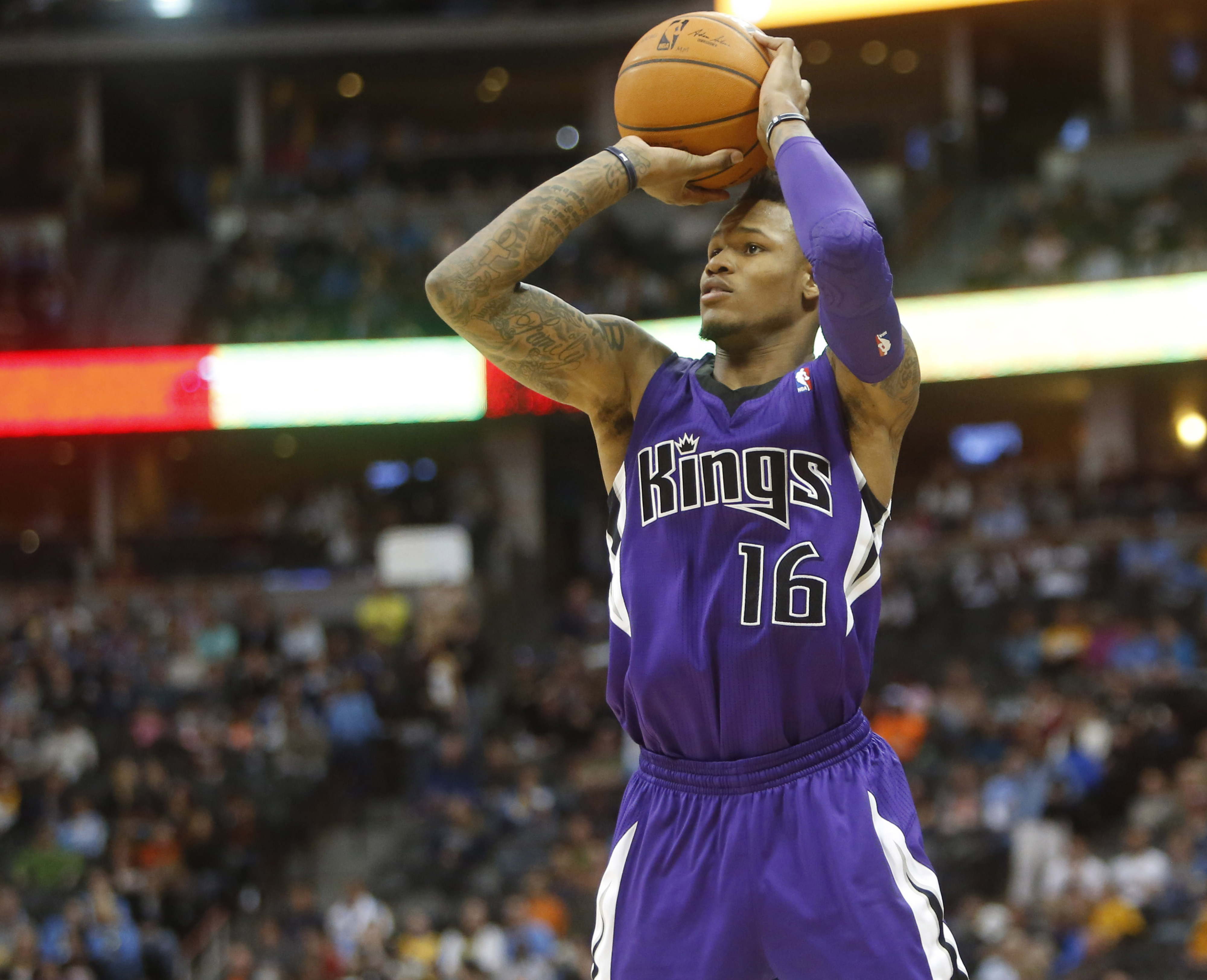 The Kings rookie was known for his great shooting at Kansas but that hasn't translated to the NBA.

Ben was brought in to be a shooter, and shoot the ball he did, hoisting 297 three point attempts in his rookie year.  At Kansas he had shot 174 attempts in 37 games and hit 42.0%, an elite number.  His 32.0% at the NBA level was far from elite.  Earlier this season, we explored some of his shooting struggles and noticed that he did a lot better with the short NBA corner three.  Going back to his shot chart after the season, that trend continued, as he hit 44.83% of his right corner threes and 40.38% of his left corner threes.  Unfortunately he only shot about 27% of his total threes from those areas, and only hit 29.8% of his other three point attempts.  I feel that the Kings did a better job to put him in a position to shoot those corner threes as the season went on, but it's clear that for him to become an elite NBA shooter like he was at Kansas, he'll have to adjust to the length of the NBA three point line.

It's not just shooting that Ben has to work on offensively though.  He particularly needs to work on his ballhandling skills, a known weakness coming out of college.  Right now he's not much use dribbling aside from straight line dribbling, and he gets in trouble when he's put under much pressure at all.  It's crucial for him to be able to develop a handle in order to both create his own shot and to attack the basket.  He's a good Free Throw shooter (80.4% in his rookie year), so if he could get to the line easily, it would do wonders for his efficiency.

One area where he's actually pretty good on offense is moving without the ball.  A lot of his shot opportunities this season came from his excellent work off the ball on getting open, something he should continue to develop.  As he gets better as a shooter, he'll get more and more opportunities as teammates learn to trust him more and give him the ball.  The Kings have a lot of guys to focus on, with DeMarcus Cousins especially drawing double teams on a regular basis, and having a reliable shooter that can get open in those situations would be huge for the Kings' offense.  Ben's already got the get open part down.

Defensively, Ben's got a lot of potential thanks to his size and athleticism, and he puts in the effort, but there's no denying he was awful on this end last year.  His instincts were often not great either, as he consistently got punished by leaving great outside shooters to help on drives.  In terms of on-off splits, the Kings were about 3.1 points per 100 possessions worse defensively with him on the court (2.5 pp100 worse offensively).

There's a lot of things to like about Ben though.  Everything I've heard both privately and publicly seems to indicate that he's a fantastic worker and possesses a huge desire to improve.  His shooting at Kansas did not seem to be a fluke, and he was able to maintain a few hot streaks his rookie season.  This upcoming season will be huge for both him and the Kings.  Hopefully he'll be able to take a nice step in becoming the player that the Kings hoped he'd become when they drafted him.