Share All sharing options for: 2013-14 Season in Review: Pete D'Alessandro

September 13th, 2013: Signed Hamady N'Diaye to a 1 year, minimum deal with no guarantees.

March 31st, 2014: Signed Jared Cunningham to a deal for the rest of the season.

Pete D'Alessandro's arrival in Sacramento was just a little bit different than when most teams hire a new GM.  For starters, the Kings hadn't had a new GM since 1994 as Geoff Petrie had been the longest tenured basketball operations executive in the NBA.  Most of us didn't know any different, and here came a guy in D'Alessandro who won the job despite never having the big job himself.

D'Alessandro inherited a roster with a few bad contracts, a malcontent star player, and not much time to make big decisions on both the draft and re-signing a guy like Tyreke Evans.  This was a team that clearly needed a makeover and a fresh start, and D'Alessandro definitely did that this season, achieving perhaps the single greatest amount of roster turnover in one season that Kings fans have ever seen.  By the end of the season, only four players from last season's team remained, and one of those (Isaiah Thomas) will soon be entering Free Agency.

D'Alessandro was hired as Sacramento's GM just 12 days before the draft, and as such didn't get nearly the same amount of prep time as he will have this year.  Despite that, the top prospect on Sacramento's board, Ben McLemore, fell all the way to their lap at #7 and they were also able to add an athletic PG in Ray McCallum at 36.  McLemore of course, had a really rocky season, one in which he was thrown into the fire thanks to the Kings lack of depth at SG , but the players the Kings passed up on aren't exactly world beaters themselves.  Michael Carter-Williams was taken 10th and won Rookie of the Year on a team where he was allowed to dominate the ball and play at the fastest pace in the NBA.  Trey Burke went 9th, but while the Jazz were better with him than without, his shooting numbers were almost as bad as McLemore's.  Giannis Antetokounmpo had some bright moments but he was a complete unknown coming into the draft, and it was not a given that his game would translate.  It's still pretty early to tell whether the selection of McLemore was a good or bad one, but given McLemore's potential and the lackluster performance of this entire rookie class, it still seems like a good pick.

McCallum at 36 proved to be a steal as he showed with his good performance down the stretch of the season in the place of an injured Isaiah Thomas.  The only rookies of note taken after him were Nate Wolters, Jeff Withey and Ryan Kelly.  I guess you could also include D-League Phenom Pierre Jackson, but he has yet to play in the NBA.

The next big decision D'Alessandro had to make was regarding the future of Tyreke Evans.  Along with DeMarcus Cousins, Evans had been a part of the fabric of this franchise for the previous four seasons, and most fans wanted him back.  Sure, he hadn't lived up to the hype of his rookie season, but he was still young and very talented.  That's why it came as a bit of a shock when D'Alessandro opted not to match New Orleans' offer of 4 years, $44 million for Evans.  Kings fans were used to Petrie not only re-signing most of their Free Agents, but overpaying without letting the open market dictate a player's value.  Pete had a value in mind when it came to Tyreke Evans, and New Orleans offer was greater than that, so he let him go, but importantly, he didn't let him go for nothing.  D'Alessandro was able to work a sign-and-trade in which the Kings got back Greivis Vasquez and a couple 2nd round picks, assets that the team would use later in the year.  Vasquez was initially brought in to be Sacramento's new starting PG, a player with a pass-first mindset that would hopefully curtail some of the selfishness of the last few seasons.

D'Alessandro's decision not to match Evans' contract seems to have been a good one in retrospect.  Evans did have a phenomenal end to his first season in New Orleans, averaging 20 points, 5.5 rebounds and 6.5 assists while shooting 50% from the field over his last 22 games (in which he was a starter, unlike the previous 3/4 of the season), but most of the season was a relative disappointment for Tyreke.  Would the Kings have been better this season with Tyreke? Probably, but by not keeping him they were able to remain more flexible asset and cap wise.

The first of what would be a few big trades this season for Sacramento came when the Kings turned a couple of the 2nd rounders they got from the New Orleans trade into Luc Mbah a Moute, a defensive minded player who could guard multiple positions.  Unfortunately for the Kings, some injuries lessened Mbah a Moute's impact and preparation time, and by the time he was able to play meaningful minutes, he was off to Minnesota in a trade for Derrick Williams.  This was a trade about acquiring talent, while Minnesota hoped to use Mbah a Moute as more of a role player.  The Kings were still a team in need of talent, and Mbah a Moute's abilities, while valuable, didn't tend to stand out as much on a team as far away from the playoffs as the Kings were.  Williams himself has yet to translate that talent into consistent production, but the risk on the trade was minimal, and there still may yet be a reward.  As of now this trade is about even for both teams.

After letting Evans walk in Free Agency, the Kings had a bit of cap space to work with and reportedly made offers to guys like Andre Iguodala and Jose Calderon.  The offer to Iguodala was surprisingly pulled (it's still a mystery what really happened there) and he eventually signed in Golden State, and Calderon decided to join the Mavericks instead.  The one signing the Kings would make was giving Carl Landry a 4 year, $26 million deal in what is probably D'Alessandro's worst move to date.  The Kings already had a couple PFs under long term contractsin Jason Thompson and Chuck Hayes, and they also had Patrick Patterson at the time who was coming off a very good year.  Signing an aging, offensive-minded PF didn't seem to make a whole lot of sense at the time, and the decision was made worse when Landry ended up missing most of the year with multiple injuries. 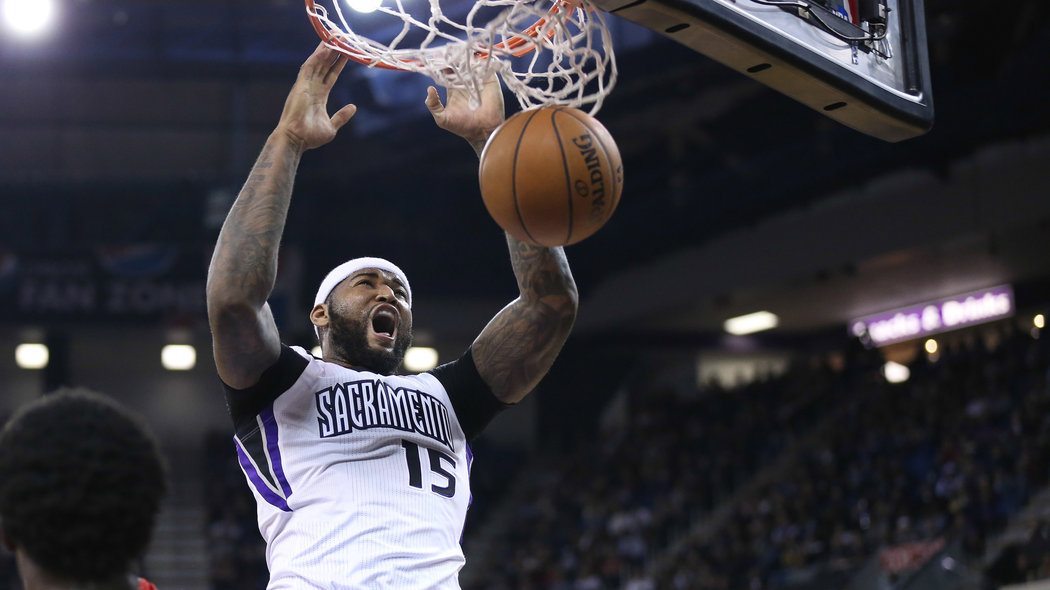 The Kings big man had an amazing season, aside from the whole winning just 28 games thing.

With Tyreke Evans gone and a new regime in place, the Kings were intent on making DeMarcus Cousins the face of the franchise and work began immediately on getting him a max contract extension.  In a June 20th poll I conducted on this site, 60% of Kings fans said that they would not give Cousins that extension and instead wait until he became a restricted Free Agent to allow the market to dictate his value, similar to what the Kings did with Evans.  Interestingly enough, by the time the Kings actually did sign Cousins to a 4 year, max contract extension in September, 88% of Kings fans polled agreed with it.  Of course, as Tom mentioned in his analysis of the deal, waiting to extend a player like Cousins (particularly being a big man) probably wasn't going to result in any meaningful discount anyway.  Cousins responded with his best year to date, a year in which he vaulted from a promising player to a real force in the league.  Sacramento's faith was rewarded, and Cousins has had nothing but good things to say about current management.

But extending Cousins was relatively easy compared to the trade that D'Alessandro pulled off in mid-December when he sent Greivis Vasquez, Patrick Patterson, Chuck Hayes and John Salmons to Toronto for Rudy Gay, Aaron Gray and Quincy Acy.  It was a trade that seemingly came out of nowhere, and a big gamble that Gay would return to form as he was playing some of the worst basketball of his career.  Fortunately, not only did Gay end up returning to form, he surpassed it, averaging career-highs in Points, FG% and Assists in his time in Sacramento.  He played so well in fact that declining his $19.3 million player option for next season actually became a real possibility.  One of D'Alessandro's next tasks will be to convince Gay to stay, but even if Gay leaves, this was still a great trade from Sacramento's perspective as they lost minimal assets in Vasquez and Patterson and were able to dump Hayes' and Salmons' contracts as well.  Should Gay leave this summer, the Kings will actually come out as having saved money from the deal and will have some cap space to work with this summer and some serious cap space next summer.  They also acquired a young player with potential in Quincy Acy in the deal, who they can afford to develop at minimal cost.

D'Alessandro wasn't done reshaping the team however, and reports indicate he was very active all the way leading up to the trade deadline.  Deals involving Jason Thompson and Jimmer Fredette never materialized, and Fredette was eventually bought out before heading to Chicago (where he played just 56 minutes, so much for the increased opportunity).  Marcus Thornton was moved for Jason Terry and Reggie Evans, essentially cutting Thornton's contract into two smaller pieces.  It remains to be seen if Terry will ever join the team or if he will simply be bought out or traded, but Evans ended up as the end of season starting PF, bringing energy, toughness and a veteran presence to a young team.

Waiving Fredette had the secondary consequence of allowing Ray McCallum to finally get some meaningful playing time, and an unfortunate injury by Isaiah Thomas allowed that time to grow from about half the game to basically the entire game.

D'Alessandro also tried to do some experimenting with various prospects on 10-day contracts as well as making use of the D-League.  Ray McCallum was sent on multiple stints to the D-League, and training camp cuts like Trent Lockett and Daquan Jones played most of the season for the Bighorns.  The Kings gave trial runs to players like Orlando Johnson, Royce White and Jared Cunningham, searching for a possible impact player.  None of those guys really panned out, but the fact that the Kings were trying was a good thing.

Now entering his first full offseason as Kings GM, D'Alessandro has more tough decisions to make.  The roster has been heavily reworked but still needs a lot of polishing, especially if Rudy Gay leaves.  There is the decision to make on Isaiah Thomas, an upcoming lottery pick that may or may not be moved, and disgruntled players on longer deals like Jason Thompson.  This will be yet another year of transformation for the Sacramento Kings, but if there's one thing we can take away from Pete D'Alessandro's first year as GM, it is that he will be aggressive and bold.