Share All sharing options for: 2013-14 Season in Review: Michael Malone

Reviewing a coach is particularly tough, especially a first year coach.  You can't point to any one statistic and say "See, this is where the coach really helped" or "If we had a better coach, this would be better".  Still, there are things we can look at to determine just how much of an impact the coach had, and I will try to do that here.

Michael Malone is Sacramento's 7th coach in 8 seasons since Rick Adelman left.  New owner Vivek Ranadivé wanted him so badly he essentially tapped him as head coach before he had even finalized a sale agreement, and he hired him before hiring Pete D'Alessandro as General Manager, an uncommon move.  It's not as if the move was unheralded however, as Malone was one of the more coveted head coaching candidates last summer and likely would have gotten a job somewhere regardless given the massive Coaching turnover we saw last season.  Malone had a reputation as a defensive guru, and rumor had it he was a lot more involved in the X's and O's of the Warriors than Mark Jackson (to the point that Jackson wouldn't discuss Malone in interviews this year).

Malone's first year as a coach was seemingly about changing the culture, and we heard multiple times throughout the year that this season was not about wins and losses.  Despite that, Malone seemed to take each loss very hard, especially early on in the year.

Malone spent a lot of his time as a coach visibly teaching his team.  He was one of the more animated coaches I've seen on a sideline, and during breaks, free throws, etc. he'd constantly be in the ear of either a player or the bench.  He earned a reputation for a quick trigger on calling timeouts, even ending up joking about it throughout the year, but it was hard to argue with why he called the timeouts.  Oftentimes it was because of a defensive lapse or, more often, a series of defensive lapses.

Sacramento's ridiculous amount of roster turnover didn't allow for much stability.  About half of the players that were in training camp with the Kings were gone by December, starting a whole new learning process.  It also seemed clear that Malone wanted to bring the younger guys along slowly, but terrible effort and performances by guys like Marcus Thornton for example forced his hand and made him put the young McLemore into the starting lineup much earlier than he would prefer. 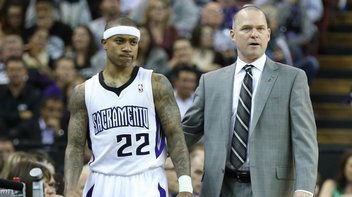 The Kings may have finished with the same record as last year, but they made some improvements that didn't show in the win-loss column.

Record wise, the Kings didn't improve at all from from 2012-13, finishing with the exact same 28-54 record.  However the record doesn't indicate the myriad of improvements the Kings did make, particularly in margin of victory (equivalent to that of a typical 33-49 team), defense (108.8 defensive rating was lowest for Kings since last playoff run, but still not great), and defensive rebounding (from one of the worst to one of the best).  Perhaps most importantly he oversaw the best year of DeMarcus Cousins' career.  Much of that credit has to be given to Cousins himself of course, but Malone made it clear early on that this was Cousins' team, and he put him in a position to succeed.

Kings players really seem to like playing for Malone as well.  Unlike previous years when players had seemingly given up on the coach midway through the season, we didn't hear a peep of unrest this season.  Instead all we heard was praise.

"I think the future is bright," Cousins said following Sunday's game.  "I'm with Malone until the end - he knows that.  He has my back, I've got his.  You're going to be seeing him for a while until he gets rid of me because it won't be my choice."

"Coach Malone has been 100 percent real with me since day one. And we talk almost every day. He’s texting me. We talk about the games, who’s playing. About the draft, what I think about this player. He’s a great guy, man. The best coach I’ve had since I’ve been here and he’s a player’s coach."

But it's perhaps Michael Malone himself that offers the best review of the season and expectations going forward:

"We made a lot of progress in areas, we've played well at certain times of the year and I just want to try and get better," Malone said.  "And 28 wins will never be something we're proud about."