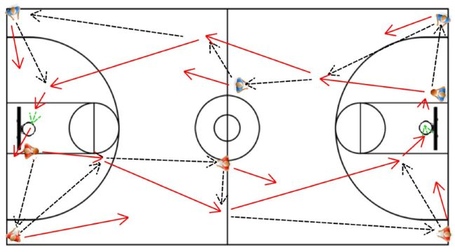 "Move it, move it, pass, pass!" shouts the Kings coach. We kept hearing it over and over all season long. The Kings lacked ball movement.

The fans saw it.

The NBA writers wrote it.

Too much one-on-one isolation. The Kings were dead last in the league in team assists per game. One might argue that a team can only get an assist if there are good shooters to receive the ball. That is correct to a point, but the Kings were also dead last in assist opportunities per game (that is, passes by a player to a teammate in which the teammate attempts a shot, and if made, would be an assist.)

That is only part of the story, though.

Pete D'Alessandro and Michael Malone are both stressing that it is a priority for the team to improve ball movement. We all saw the San Antonio Spurs dismantle the Miami Heat in the finals with their beautiful passing game. But since assists only measure the last pass that led to a made shot, is there a way to actually measure how good a team is at passing in general?

Which teams are best/worst at the passing game?

Finally, if the Kings are trying to improve their passing game... why did they trade away their best assist/game guy, Isaiah Thomas?

To try to answer these questions we can use statistics that are newly available for this past season. At http://stats.nba.com the NBA has listed the sortable results of a new player tracking system. Using six cameras installed in the catwalks of every NBA arena, SportVU software tracks the movements of every player on the court and the basketball 25 times per second. The data collected provides a plethora of innovative statistics based around speed, distance, player separation and ball possession.

The following is simply a discovery of ball movement. It makes no determination as to other valuable attributes of a team's or player's game.

To determine which teams/players are most prolific and most stingy at passing the ball I used two statistics available at nba.com.

One is Passes Per Game which is the number of passes a team or individual player has made per game.

The other is Time of Possession which is the total time in minutes per game that a team/player has the ball in hand.

By using the formula Passes Per Game divided by Time of Possession we can come up with a measurement of how many Passes Per Minute a team or player makes. Meaning... does a team or player tend to pass the ball when they get it, or do they tend to hold on to the ball more and "let ball movement die" with them.

Below is a table of all NBA teams Passes Per Minute

We can see that the Spurs, as expected, were the best passing team in the league. The Kings were second worst. We can also see that passing volume is not necessarily an indication of team overall success. There are winning and losing teams at both ends of the spectrum, so other factors such as shooting ability obviously must be taken into account for success. Also teams like the Warriors pushed the ball quickly up the floor and took quick shots which limited their overall passing.

Looking at only the Kings players, who on the team was best and worst at Passing Per Minute that they had the ball in their hands?

The results are surprising.

The first thing that jumps out is how little time individual players actually have the ball in their individual hands during a game. When one takes into account that the 48 minutes in a game are split roughly in half for each team, then the amount of time wasted when the clock keeps running, it may come as a shock that guys like DeMarcus, Rudy, heck, even Kevin Durant actually only touch the ball for 2 to 3 minutes a game. Point guards naturally tend to have it more, but walking the ball up the court after an inbound while gaining individual possession time isn't a good thing.

So as you can see above, when looking at players that actually played, the ball died in Isaiah's hands more than any other Kings player. Remember, this isn't looking at assists, only a player's willingness to pass the ball out of his own hands once he gets it.

But how does this compare to other players in the league? Maybe it is a characteristic of all elite players to only pass the ball 7 times a minute.

For the table below I chose some comparable point guards in the league. I limited it to players who played at least 50 games during the season. It isn't a list of all point guards because it is time consuming to get the individual stats as the NBA doesn't have my needed stats in the same area, but hopefully it provides enough for comparison.

We can see that Isaiah is last again. Collison is a much more willing passer and if ball movement is truly a desire of the Kings front office, this may have been one of the things they looked at in their analysis.

Here are some other players who might be considered elite players (some are even considered guys who kill ball movement and take every shot when passed to) for comparison sake:

Finally, even though they didn't play enough games, here is a guy considered a great passer and another considered a ball hog by some. ;)

You can see yourself how Isaiah compares to the folks in these tables as well.

I must admit... this surprised the hell out of me. Yes, it seemed at times that Isaiah could dominate the ball a bit but I had no idea how he compared to the rest of the league.

Again, this is ONLY a measurement of ball movement and not a player's overall ability or value, but perhaps this demonstrates one part of what the Kings front office might be looking at when they outwardly say they want the team to move the ball more and then make certain player moves.

What the Kings are Thinking... but Can't Say Out Loud

It's OK, LeBron, To Be Afraid of the Biggest Challenge

Why the Sonics Left and the Kings are Staying

Does Kings' future hinge on NBA's willingness to admit a mistake?

SAC or SEA, the choice that benefits ALL owners more