The Kings got good performances out of their roster players in the Summer League. Let's take a look at what we saw from Nik Stauskas, Ben McLemore, Ray McCallum, Quincy Acy and Derrick Williams.

The Sacramento Kings are the 2014 NBA Summer League champions, and what a road to victory it was!

OK, it was seven games and they played well, for the most part, in six of them. Championship trophies and commemorative hats aside, what was fairly evident in this tournament was that the Kings had the most complete team. They had scorers, a point guard and some guys who were physical under the basket, grabbed rebounds and played defense.

That being said, no one on the Kings squad really wowed individually, and that is why there were no All-NBA Summer League first or second team selections on the team. What really mattered though is all of the Kings roster guys had good showings.

Let's take a look at how each of them did.

Nik Stauskas (9.9 points, 2.3 rebounds, 2 assists, FG% 43 (23/53), 3P% 47 percent (11/23), 1.8 turnovers) - Stauksas showed he belongs in the NBA by illustrating his basketball IQ and being efficient. He plays within himself and can knock down shots. Every game seemed to feature a couple of passes from Stauskas that opened your eyes. One particular example came in the second quarter of Monday's championship game. Ray McCallum grabbed an offensive rebound and passed it to Stauskas at the top of the three-point stripe. Stauskas pump faked his defender, dribbled around him, drawing McCallum's defender toward him in the process. As the defender collapsed on him, Stauskas dished out to McCallum for an open three that went in.

The extra pass. These are the little things Stauskas put on display consistently in Summer League.

When he puts the ball on the floor and takes it to the rack, Stauskas is able to disrupt the defense and create. Though he began the Summer League by taking it to the basket frequently, he seemed to lose some of that in the later games. In the first two games, for example, he took a total of 13 free throws. In the remaining five games, he only had five free throw attempts. For whatever reason, (and he may have been trying to simply fit in to the offense) he gradually got less aggressive in that area of his game.

A lack of aggressiveness is something Rudy Gay mentioned after watching Stauskas in Vegas. With DeMarcus Cousins and Gay on the floor with him in the regular season, he won't need to dominate the ball too much and can just hang out on the wings, but getting to the free throw line is something the Kings could use out of their rookie. Stauskas seems like a kid who knows when to pick his spots, so his timing will probably come with experience. Regardless, even when he wasn't shooting a ton or driving into the lane, he was making good basketball decisions and that is definitely a plus, and he showed glimpses of decent defense as well, especially on a few transition breaks against the Rockets on Monday.

Ben McLemore (12.6 points, 4.1 rebounds, 1.3 assists, FG% 44 (30/67), 3P% 30 7/23, 3.8 turnovers) - McLemore was much more aggressive and confident than what we saw out of him for the majority of last year. He led this Kings squad in scoring. Not only that, his ball handling and defense has seemed to improve, along with his jump shot. His confidence and dribbling were on display on this dunk in the fourth quarter Monday.

McLemore seems to be figuring out how to slow down and let the game come to him and he will be the first one to say this is something he needs to continue to work on. The amount of floor time he got last season, combined with his work this summer seem to be paying off.  He still isn't quite where he needs to be though. His turnovers came back to bite him again - he averaged 3.8 in Summer League after only 1.2 during last year's regular season. And although the instances were less frequent, he still did disappear on offense on occasion. His defense has gotten a little better, but he still needs to improve there as well because he gets lost sometimes (as shown in the play from Monday's game below. Yep, that is Ben's man on the left). 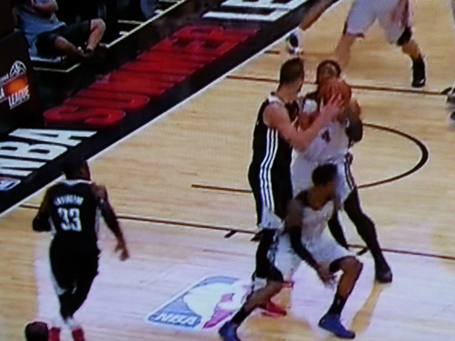 If he can be a reliable defender moving forward, he may be able to keep his starting position away from Stauskas going into next season, but that could end up being a tough task. McLemore still has plenty of room to grow and his progression in the Summer League may be an indication that he can continue to make steps toward the player many thought he could become going into last year's draft.

Ray McCallum (12 points, 5 rebounds, 4.1 assists, FG% 50 (30/60), 3P% 38 (5/13), 2.1 turnovers) - McCallum was named the MVP of the championship game (29 points will do that), but he may have been the MVP of the entire Summer League for the Kings. If for nothing else, he was the only consistent facilitator the Kings had on the roster. And facilitate is what he did. He ran the offense, played under control and led the Kings to six victories.

He shot the ball well also. Outside of his 9/15 shooting display on Monday, he was 50 percent overall from the field - up from 38 percent in last year's Summer League campaign. McCallum continues to be reliable and someone who provides good stability at the backup point guard position. You wonder if he has the athleticism to take that next step and become someone who folks are clamoring to get in the starting position. What he displayed against the Rockets Monday would certainly suggest he has the talent and capability of rising to that next level. He is a decent defender on the perimeter as well.

Plus, you have to love the passion he had in the championship game. McCallum wanted that game and he didn't stop until it was his. The kid that was raised by a coach has the IQ that you want on a basketball team and he will continue to be useful for the Kings moving forward.

Quincy Acy (11.3 points, 6.7 rebounds, FG% 53 (28/52), 1.4 turnovers) - Acy is going to be in the NBA for a long time. Just like his beard brother Reggie Evans, he brings things to the table teams in this league want: rebounding, toughness and defense. In the Kings' seven games, he showed all of that and a little offense as well. Acy was one of the team's leading scorers. We saw a jump shot, power moves under the basket and more. Head coach Michael Malone made it clear early on that these Summer League Kings didn't need him to be a shooter though (they don't need him to be Dirk Nowitzki is actually how he put it). But hey, adding a legitimate offensive game could be a good way for Acy to separate himself in the power forward logjam the Kings have.

As far as the power forward position goes, Malone told me he wants guys who can compliment DeMarcus Cousins, rebound, be an anchor of the defense and be a facilitator on offense. And he prefaced that with a comment about how it all depends on what happens with the roster throughout the rest of the summer. Where Acy fits into that equation is anyone's guess. It is no secret that solidifying the power forward position is a top priority for the Kings. According to Jason Jones of The Sacramento Bee, Acy expects to know by Friday if the Kings are going to pick up the option on his contract next season.

Like McLemore, Acy showed that he can still enhance his game and he puts in the work to make it happen. If the Kings walk onto the floor in October with the same 48 power forwards, Acy deserves to be one of those forwards who gets some of the minutes.

Derrick Williams (12.3 points, 2.7 rebounds, FG% 42, 3P% 40, 1.3 turnovers) - Williams only played in three games because the Kings only planned to use him for three games, apparently. His best game was his third and final game, where he scored 17 points on 6-10 shooting. It is clear that Williams can make things happen when he puts his mind to it and plays aggressively, something Malone has been pushing him on. What continues to haunt him and probably drives Malone crazy is his defense. In his last game on July 14, he was beat on defense on multiple possessions in a row. He just doesn't seem to have the same focus on defense that he does on offense and it shows.

To his credit, Williams appears to be working hard and is dedicated to getting better, on the offensive end. Williams said he has been working on pick and pop threes this summer. With the Kings lacking a ton of tradable pieces, however, it would make sense that Williams is at the top of the list of guys who they are looking to move. He was reportedly part of the offer the Kings made for Josh Smith, so he has already been put out there.

In the end, the guys mentioned above and reserves like Eric Moreland and MarShon Brooks helped propel this young squad to a Summer League title on balance, defense and effort. The front office made it clear on the sidelines that their intent was to use this championship as a step toward building a winning culture, and it has certainly moved the ball in the right direction.