Omri Casspi Clears Waivers But Kings Could Still Sign Him

Omri's not coming home... yet?

ESPN's Marc Stein is reporting that one time Sacramento Kings small forward, Omri Casspi, has officially cleared waivers. This news comes as quite a surprise to most, as the Kings were rumored to have strong interest in bringing Casspi back to Sacramento, after news broke earlier this week that he'd been waived by the New Orleans Pelicans.

ESPN sources say that Omri Casspi, in a surprise, has just cleared waivers and is a free agent

With Casspi on a favorable minimum contract, expectation was that he'd be claimed, with Sacramento among the teams expected to put in a bid

This doesn't mean that the Kings couldn't still go after Casspi, who's just become an unrestricted free agent looking for a new home. For instance, the team could potentially utilize the bi-annual exception to fit him on the roster. But, Sacramento may find that they need to move some other players to make room for him if they're still interested... and Stein believes they still may be.

Omri clearing waivers should come as a welcome surprise to Kings fans fearing that fan-favorite Quincy Acy's option wouldn't be picked up, in order to clear up enough cap space for Casspi's contract. We reported earlier this week that the Kings were exploring avenues in which they would be able to keep Acy, and now they have more time to figure out ways to make that happen. So for now, many Kings fans can breath a sign of relief.

But, that's not to say that Omri wouldn't be a welcome addition to the roster. Casspi's rookie year in Sacramento remains his most successful in the NBA in terms of production, but it was last year in Houston where he finally seemed to grasp that his NBA future depended on him embracing being a role player rather than trying to become a star.

The Kings would look to a player like Casspi to help space the floor (he's a career 35.2% three point shooter) as well as push the pace by running in transition.  The Kings have said multiple times this offseason that they want to become a faster, more unselfish team, and Casspi fits into that mold.

Should the Kings sign him he'd likely compete for minutes with Derrick Williams and Travis Outlaw, assuming that those two are still on the team when the season begins.

Cross your fingers this gem that's been floating around the internet doesn't become obsolete... it'd be a terrible waste 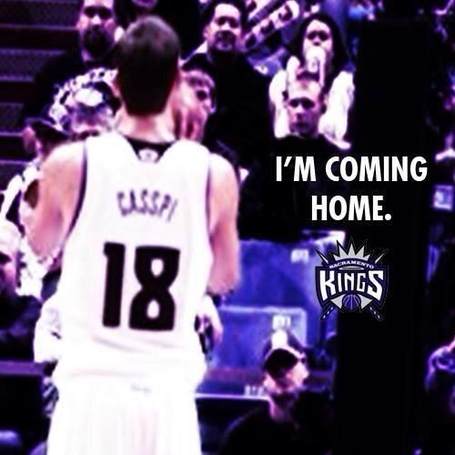 Stein did the math and it appears the Kings may now have room for both Casspi AND Acy while staying under the tax line. The front office might have taken a gamble in not placing a claim on a player they wanted... but it may have paid off.

Based on my famously dodgy math, Casspi's current contract would have exceeded Sacramento's mere $976,295 under the tax line. This way ...

This way Casspi can sign deal that only counts for $915,243 on Kings' cap and allows SAC to keep Quincy Acy as opposed to waiving him first

So how does this work?  Let's head to Larry Coon's CBA Faq for the answer:

So despite Omri's minimum salary being $1.06 million, he would only count as $915,243 against the cap (the 2 year minimum) if the Kings sign him to only a 1 year minimum deal.  This would keep the Kings below the tax even with Acy.