Can a healthy Carl Landry help the Kings next season?

Carl Landry really hasn't had a chance to prove himself worthy of that four-year contract he signed with the Kings last summer. If the circumstances are right, he may get a chance next season.

Share All sharing options for: Can a healthy Carl Landry help the Kings next season?

Carl Landry was Pete D'Alessandro's first free agent signing last summer, and let's face it; the move has been a bust up until now due to injuries.

But a healthy Landry could actually help the team next season - the only problem is that statement comes with a lot of "ifs."

If he stays healthy. Landry will turn 31 before next season begins and is coming off knee surgery. Last season, he only played in 18 games due to a torn hip flexor and that knee surgery. That could mean one of two things: he is beginning his decline and will be dealing with injuries for the rest of his career, or it was a fluke/terrible coincidence with the timing of the Kings signing and he is going to rebound next season and actually play a role.

Hopefully, it is the latter and he will be better than what we saw out of him for the month or so that he played midway through last season. Over that stretch, Landry averaged 4.2 points, 3.2 rebounds in 12.9 minutes per game. His per 36 last season for those 18 games was 11.7 points and 8.8 rebounds, according to basketball-reference.com. Though it was a small sample size and he needed time to adjust back into the NBA game, he just never really seemed to get acclimated, which was a little concerning considering he is a veteran with a pretty good basketball IQ.

At full strength, Landry could represent a key offseason acquisition this time around and provide a spark to the offense. He can also get under the skin of opponents from time to time on defense.

If he is still on the team. There is a possibility Landry won't even be on the Kings roster come October because the team is trying to free up the logjam at power forward. If the Kings can use Landry to do that, they probably will. But with $20 million left on his four-year deal, to go along with shaky knees, you have to wonder how many teams would be willing to take a chance on him.

Out of the power forwards on the roster, Jason Thompson, who has a similar contract and skillset to Landry, is in more dire need to be moved and may be more of an attractive prospect because he is a few years younger. So there is still a chance Landry suits up for the black and purple next season.

If he has a defined role. Landry has served as a bench player for the majority of his career - in the 444 NBA games he has played (including playoff games) he has only started in 75. He has a career average of 11.5 points, 5.2 rebounds and a 53 percent field goal percentage in 24 minutes per game. That sort of production would be a welcome addition to a Kings bench that will, in all likelihood seek scoring from newly acquired Omri Casspi and/or Travis Outlaw, and youngsters like Ray McCallum, Ben McLemore or Nik Stauskas.

If Thompson is traded and the Kings don't manage to land a power forward through a trade that is worth starting, Landry could very well find himself as the starter at the beginning of the season.

Landry's best statistical stretch of games of his career were the 28 games he started in Sacramento in the 2009-10 season after being traded from Houston, in which he averaged 18 points, 6.5 rebounds 1 steal and nearly 1 assist per game on 52 percent from the field in 37 minutes per game. Then again, that was four years ago, which very well could have been his prime.

The NBA TV broadcast team put the following prospective depth chart up during the Summer League championship between the Kings and Rockets. 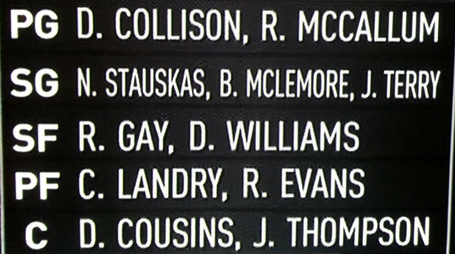 This assumes Thompson is still around and Landry outplays Reggie Evans and Quincy Acy (if they are still around). (It also doesn't included Casspi, but we are talking about power forwards anyway.) The front office liked what they saw out of Quincy Acy in the Summer League and started Evans in 14 games last season. But at full strength, Landry is a better overall player because of his offensive game, although Acy has developed in that area. I can't imagine Thompson being too pleased about backing up Cousins either.

The other problem is that there isn't really a big man on the roster who compliments Landry's style of play. Landry is best when paired with a power forward or center with a true shooting stroke who can/will clear space for him to work. And while Cousins is certainly taking his shooting to the next level, he is the one who will command space under the basket to create because, well, he is the best player on the roster.

There is probably no bigger "if" at this point than which big men are going to actually be on the team when the season starts, and that outcome will almost certainly have an impact on Landry's production.

Based on his comments last season, dealing with his injuries was frustrating for Landry.

He's got to have some extra motivation this season to bounce back and prove to the Kings front office that they didn't make a mistake on him. He was in Las Vegas during Summer League working out with the team.

So here's to hoping Top Hat erases some of these "ifs" by either returning as a healthy and steady contributor for the Kings, or by serving as a piece of a trade that helps make the team better.

Until then, that contract remains curious.